Adele Shares the Spotlight and A Grammy with Beyoncé 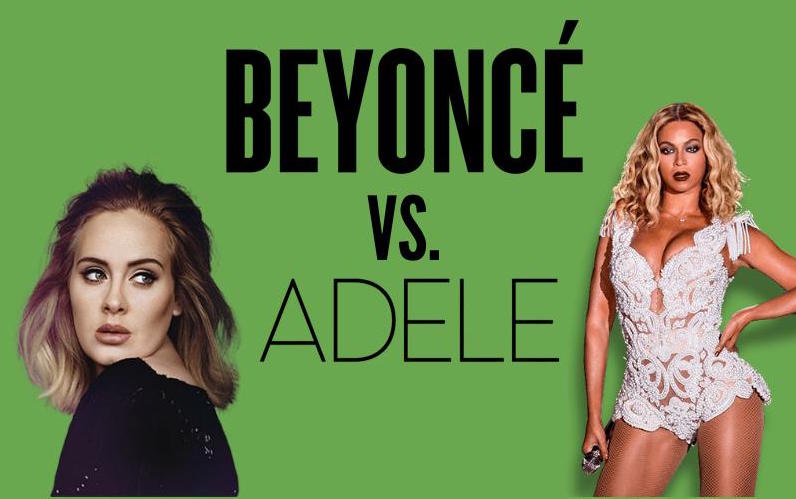 Fans admired Adele for her decision to acknowledge Beyonce after the pop diva was passed up for Album of the Year for the third time.

Beyoncé and Adele’s fan bases are dedicated to their celebrity’s reputation and level of achievement. Beyoncé’s followers deem her the “goddess of pop” and praise her performance skills while Adele’s fans applaud her timeless ballads and phenomenal vocal range. At Academy, many girls have their own opinion about who is the overall most outstanding singer and performer.

“This shouldn’t even be a question, Beyoncé is Queen” says Senior Morgan Graff.

Senior Jhuztin Honrado says, “I may have picked Beyoncé, but Adele is a very close second.”

“I like Adele so much better because I feel Beyoncé is overrated. She’s talented, don’t get me wrong, but Adele really showcases her voice more,” says Jenna Wiley.

Senior Ally Wehle says, “I love Beyoncé but I don’t like how her fan base acts like she’s a god. I’m more a fan of her earlier music, but I still like her now. I just think Adele has a very timeless and beautiful voice.”

On February 12 at the Grammys, Adele took home the coveted award for Album of the Year for 25, beating out her competition Beyoncé. Many were upset by the decision, arguing Beyoncé deserved this award after years of losing to other singers, such as Taylor Swift. Adele and Beyoncé are both two groundbreaking powerhouse singers that have changed the face of pop music. Each singer is hugely successful, with Beyoncé just finishing a world tour and raking in 17.2 million dollars at the end of 2016 for Lemonade and Adele adding five Grammys to her award collection that includes an Oscar and Golden Globe.

Adele had taken home Grammys for Record, Song, and Album of the Year, but many voices rose up to object that Beyoncé had been snubbed- the loudest voice being Adele herself. She dedicated her speech and the award to Beyoncé, praising the singer for the positive effect Lemonade had on her and her friends’ lives.

Adele professes her love for Beyoncé and Lemonade while accepting her award for Album of the Year #GRAMMYs pic.twitter.com/8J9uWKV195

After dedicating her Grammy speech to Beyoncé, Adele then broke her Grammy in half and jokingly offered Beyoncé the other piece to symbolize both women earned the honor.

Adele used her award acceptance as a moment to shine a light on an artist who had inspired and made her feel empowered. She felt honored to have been nominated for Album of the Year but felt it was Beyoncé’s time to win.

.@Adele on Beyonce backstage: "I feel like it was her time to win. My view is kind of, what the f— does she have to do to win?" #GRAMMYs pic.twitter.com/MH22KMF05I

Often, fans pit Beyoncé and Adele against each other to see who is the greatest singer and performer in hopes of causing conflict, but in reality, both women praise each other for the heart and soul they have dedicated to their careers.

In an interview with Vanity Fair, Adele said, “When you’re between the ages of 15 and 19, maybe you see women as competition, as opposed to lifesavers and people that hold your hand and have experienced pretty much everything that you have.”

Beyoncé has praised Adele in the past saying, “When Adele sings you can hear that it’s coming from an unfiltered honesty and purity. She creates songs that go deep and expose pain and vulnerability with her soulful voice. She is a gracious woman and the most humble human being I’ve ever met.”