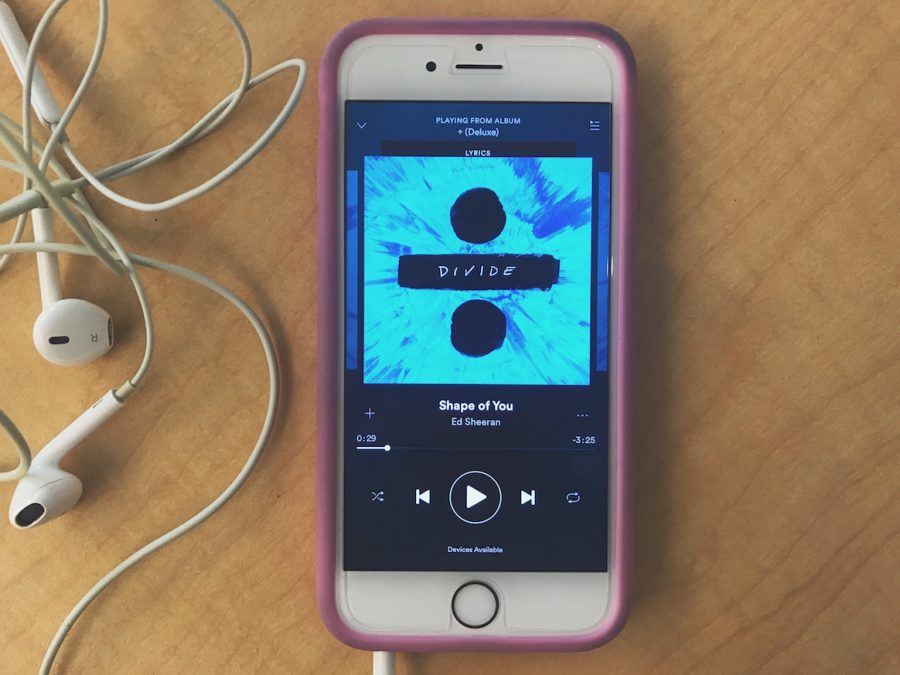 In December 2015, singer-songwriter Ed Sheeran took to social media to share that he would be giving up his phone for a while. He stated that he needed time to travel the world and see everything that he missed over his last five years of nonstop writing, producing, and touring. He also mentioned that his third album, ÷, was on the way and was the best thing that he had ever made.

Exactly a year later (down to the minute), Sheeran returned to social media by simply posting a photograph of a blue canvas.

Senior Olivia Stevens says, “I had Ed’s twitter notifications turned on, so the second he tweeted I forwarded his post to all of my friends that are fans of his and we all freaked out.”

Sheeran then began to post lyrics from the two new singles that he would later release on January 5, “Shape of You” and “Castle on a Hill.”

Little by little Ed began to post more clues, such as the track list, leading up to the release of his new album on March 3.

Sophomore Chloe Kruszewski shares her confusion at the time saying, “I had no idea what all of his tweets meant, but I didn’t think too much about them because I was just so excited that he was back and that he was going to be releasing new music soon.”

÷ was an instant success, in fact, just ten days after its release the album had sold over four million copies worldwide.

Senior Jenna Wiley shares that when she first listened to ÷, she had it playing on loop. Wiley says, “The first song I heard was ‘Barcelona’ and I didn’t really like it because I didn’t know why Ed was singing in Spanglish. Listening to the rest of the album now, I love it.”

Senior Kaia Floyd says that her favorite song on the album is “Shape of You” because “It’s not just one of those songs that you only listen to for the beat, the lyrics are meaningful too so that just makes it more impactful and enjoyable for me to listen to.”

Since his return, Sheeran has done multiple performances, including appearances on SNL, The Tonight Show starring Jimmy Fallon, and The Brit Awards.

Sheeran also excited his North American fans on March eighth by announcing his return to America for another headlining tour. Tickets went on sale March 17 and the tour will begin on June 29 in Kansas City.

Coming to North American this summer, go here https://t.co/Hjpv5qcz1K for details on the fan pre-sale that starts this Mon 13th March. pic.twitter.com/roiUsPoBQB