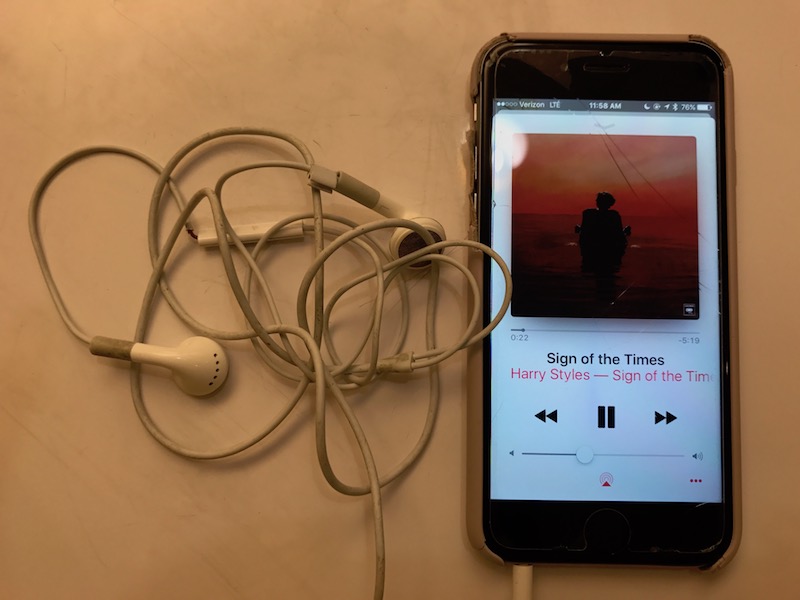 Freshman Meredith Hemmings says, “I was in the car when I heard it for the first time and it was the most beautiful thing I’ve ever heard.”

Harry Styles, famously known for his lead role in boy band One Direction, has released his first independent single titled “Sign of the Times.” Other One Direction members Liam Payne, Louis Tomlinson, and Niall Horan have already released music since the band’s hiatus began, making Styles the last of the group to branch out musically.

Set for release on April 7, 2017, Styles’ single is highly anticipated by One Direction fans and critics who are curious to see what Styles is capable of separate from the pop boy band. The first announcement of the single was a cryptic photo posted by Styles on his Twitter and Instagram accounts on March 31.

The photo that is assumed to be the cover art is drastically different from previous musical ventures that Styles has been involved in with One Direction, depicting a new style that is more directed at young adults, both male and female, instead of primarily young female teenagers.

Junior Emma Heston says, “I feel like this single is going to create a competition between whose single is better: Niall’s, Zayn’s, or Louis’. Harry’s cover art is a lot darker and it’s not like a teen band anymore, it’s more mature than what he’s done in the past, so I think that has promise.”
During the hiatus, which began in January 2016, Styles has been busy filming Christopher Nolan’s movie Dunkirk, with a release date of July 21, 2017. Paparazzi photos have shown Styles on set of Dunkirk with makeup covering his famous tattoos, so when paparazzi photos surfaced of Styles alone on a different type of set, fans took to Twitter to investigate. It was revealed that the photos in which Styles is suspended in air alone are in fact, for the music video of “Sign of the Times.”

BBC Radio 1 host and friend of Styles, Nick Grimshaw, has heard the song and will be hosting Styles on his talk show on Friday, April 7 for the first radio

Regarding his conversation with Styles, Grimshaw said, “He spoke all about making the album, and basically having to become a solo artist and that pressure of knowing that the world are gonna want to hear this and are going to want to judge it as well. But we played it in the room, and it’s so good. It’s really really good.”

Sophomore and Harry Styles fan Isabel Laboy says, “I sobbed at 3 am because it is the most beautiful thing I’ve ever heard. So blessed to be in a world with this man.”

Fans have pointed out the release date and title of Styles’ single is reflective of a legendary Prince album. 30 years ago almost to the day, on March 30, 1987, Prince released an album titled Sign O’ The Times, which was largely celebrated as the greatest album Prince created up to that point in his career. Critics say if Styles’ single is at all musically influenced by Prince, it will be full of funky guitar riffs and tropical tunes. Many say this is not out of the question considering the claim that most of the unannounced album, including “Sign of the Times,” was written in Jamaica.

This is the recording studio that Harry used in Jamaica and it's called " Geejam studios " #harrystyles @Harry_Styles pic.twitter.com/Q8zWnwBPdI

Listen to Styles’ new single released this morning on Spotify, iTunes, and other music streaming platforms.