This summer is kicking off one of the busiest music festival seasons the United States has ever seen. Thanks to the reliable consumerism of millennials, music festivals are profitable for everyone involved. Young people get to see a diversity of bands for a price much cheaper than going to each act’s individual concert, up and coming bands get paid much more than they would playing at a small venue, and advertisers have an event guaranteed to bring in copious sales and new, young consumers. This is why, according to an article on Umbel, 32 million people traveled to one or more music festivals in 2014. Here are some of the most popular approaching summer music festivals.

Backyard BBQ is in Vinoy Park in Downtown St. Petersburg on Saturday, May 27.

The lineup is good news for Grouplove fans who were distraught when the band cancelled their February 9 show at the Ritz in Ybor due to a vocal chord complication plaguing the band’s lead singer Hannah.

Senior Rachel Mckenna is one such fan. “I saw them at Big Guava freshman year and it was a great show. I know so many of their songs, and there’s just a certain energy they have performing live. I’m so glad they’re coming back,” she says.

Tickets to Backyard BBQ can be obtained for free at one of the specified ticket drop locations. The first 100 people in line at the ticket drop location within the allotted time will receive free tickets to the festival. Tickets are also available for purchase online for $20.

At Backyard BBQ there is no reentry and no selfie sticks or go-pro poles allowed. Also, no drinks may be brought into the venue as there are concessions inside.

Junior and frequent headbanger Emily Venezia shares a piece of advice for Backyard BBQ. “Dress for the weather,” she says. “If it’s going to be hot, don’t show up in jeans. It’s better to be comfortable and enjoy yourself than have to worry about your outfit.”

Bonnaroo is a four day arts and music festival held annually in Manchester, Tennessee. This year it falls on June 8 through 11. 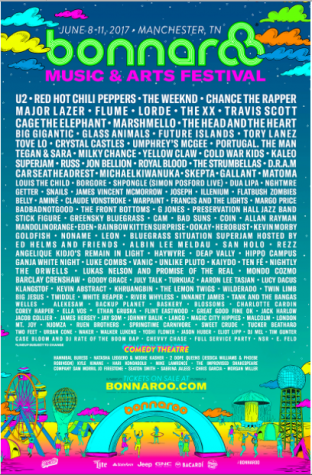 Bonnaroo is best experienced with the free mobile app that has a map of the venue, a list of set times, and information about which band will perform on which stage.

Bonnaroo has many options when it comes to sleeping accommodations that are available for purchase with tickets. There is car camping, RV camping, old fashioned tent camping, hammock camping, and pod camping. Pods are essentially large cabins within the venue that have the most modern amenities such as showers and phone charging sites.

Senior Ashley Lambert has ventured to many local music festivals and tends to leave the phone charger behind. She advises, “Stay in the moment. Put your phone down. Don’t waste the entire time taking Snapchat videos.” 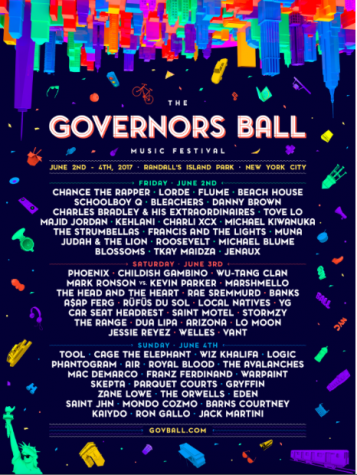 At Governor’s ball, public art is part of the experience. Fifteen foot mural exhibits from successful artists and street artists were a photographic attraction last year. The festival coordinators also hand-select local restaurants from around New York City to host for in-site concessions.

Senior and Ap Studio artist MaryKate Magyar says, “It’s an opportunity for artists to show their work to a large audience, and it brings art into events where it otherwise might not be acknowledged.”

Lollapalooza is a music festival that takes place in Grant Park, Chicago on August 3 through 6 this year. 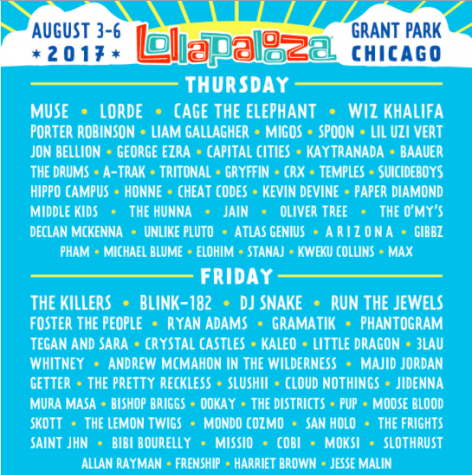 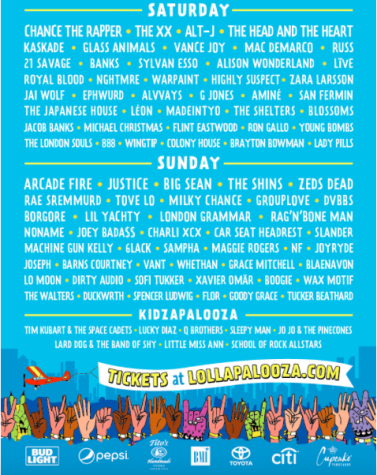 Lollapalooza is the most popular music festival in the United States behind Coachella. In addition to putting on the festival, Lollapalooza brings together local nonprofits in an event called Lolla Cares to educate the public about opportunities to serve the city of Chicago.

Senior Megan Przedpelski has been to many music festivals throughout her high school years and knows how to effectively navigate the shows. She says,  “Stand in the back of the crowd so you can dance and not be overcrowded.”