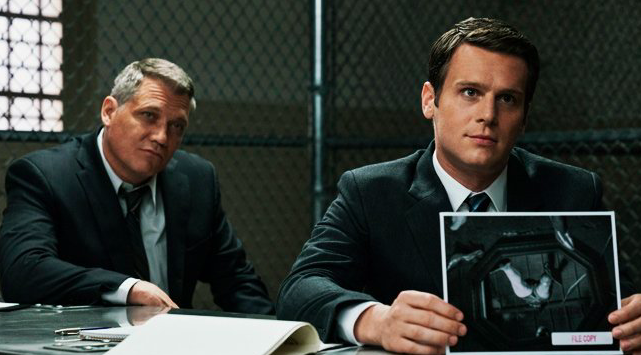 On Oct. 13, the Netflix original show “Mindhunter” premiered worldwide, and thousands of viewers tuned in to watch the chilling portrayal of some of America’s most well-known killers, such as Ed Kemper. The show stars Jonathan Groff as Holden Ford, an FBI agent working at Quantico alongside his partner, Bill Tench, portrayed by Holt McCallany. The two agents have teamed up with researcher Wendy Carr, portrayed by Anna Torv, to create a profile of the killers they interview in their investigations and hopefully increase their chances of identifying future killers.

"Truly, a disturbing real-life story, and a brilliant portrayal by Britton and Fincher as director." https://t.co/JpTBjNSTFL

The series is based on the true events of the 1970’s, when the term serial killer became widespread due to the FBI’s serial crime unit. David Fincher, the show’s executive producer, based much of the show on the book “Mind Hunter: Inside the FBI’s Elite Serial Crime Unit.”

Maddie Chandler (‘19), said, “I started watching the show last week, and I’m on episode three. I decided to start watching it because I love Jonathan Groff.”

Groff is a well known musical theatre actor, and has starred in multiple Broadway productions, most notably “Spring Awakening” and “Hamilton”. He was also the voice of Kristoff in Disney’s “Frozen” and portrayed Jessie St. James in “Glee”.

Chandler said, “I think [the show] is fantastic. It makes you think about criminals and what’s going on inside their minds, rather than just what actually happened.”

Some students see a connection between their classes and the show.

“The murderers in “Mindhunter” demonstrate the lack of empathy and remorse that we learned about in AP Psychology,” Katherine Nitchals (‘18) said.

David Fincher, the director of “Fight Club”, “Gone Girl”, and “Zodiac”, is well-known for his meticulous style of filming and his attraction to dark subject matters.

“…the reason these predators continue to fascinate us is that we want to write this behavior off as madness. Yet to be a serial killer, you have to kill at least three people—which means you have to not get caught with the first two. For that to happen, you have to be fairly thoughtful in premeditation. It’s the hiding in plain sight. That’s the thing that I find terrifying about them,” Fincher said.

Season 2 is scheduled for release in 2018, and Fincher hopes to continue filming for a total of five seasons.