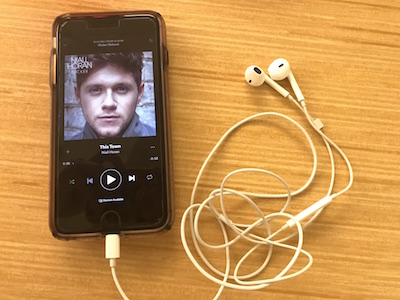 “‘Slow Hands’ is definitely my favorite song. The album really encompasses his style and personality and its calms me because it’s feel good music,” says Alisha Sanchez (‘18).

Got my own Twitter emoji for the release of #Flicker ! If ya tweet #Flicker you can see it .

I'm very excited for flicker and so proud of this guy . #NiallsDay #Flicker pic.twitter.com/2USVnNSkYA

Horan is well known because he was one of the five members of the popular boy-band, One Direction, which was formed in 2010.

“I was a One Direction fan and I wanted to listen to all of their solo albums, because I wanted to see their personalities come through.” says Caroline Corcoran (’21).

Horan has worked on this album for the past year and a half.

“I was really looking forward to the album and I am very excited to see him next September when he comes here on his tour. My favorite song that I have heard so far is “Flicker.” says Summer Wolf (’19).

Apple produced a documentary called “On the Record: Flicker” to celebrate the release of the album. The documentary goes behind-the-scenes of the recording of the album as well as interviews with Horan.

The countdown is on.
Watch @NiallOfficial's exclusive short film, #Flicker.
10/20, only on Apple Music. pic.twitter.com/zA0UbwQyBa

Horan also appeared on “The Ellen Degeneres Show” to promote the album.