One Act “Trifles” Takes the Stage 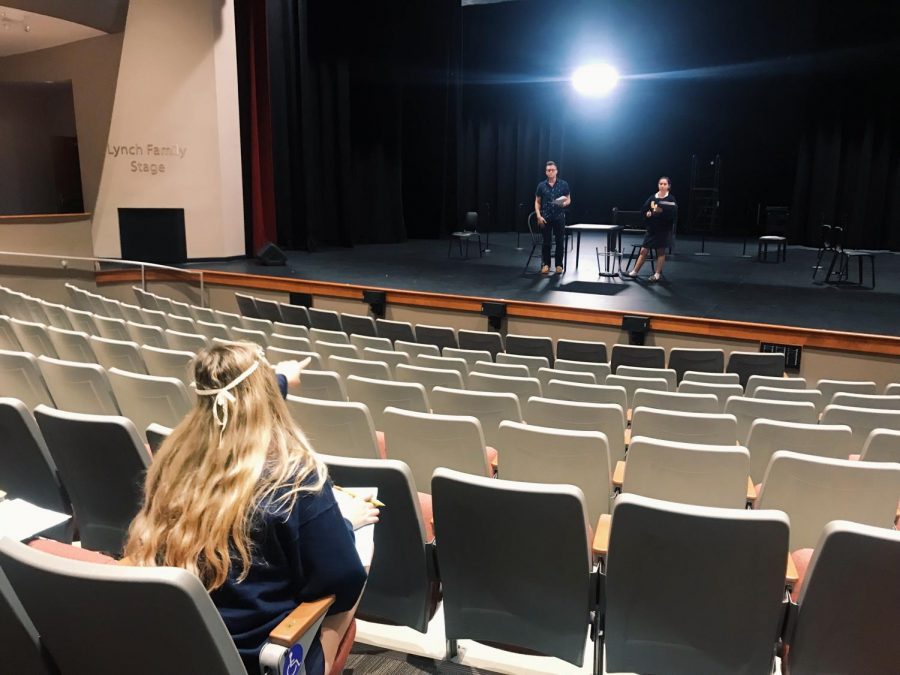 Julia Barreto (’18) is not only assistant directing “Trifles”, but she is also directing her own show “And the Bride Wore…”. Photo Credit: Gracie Wipfli/ Achona Online

This year, Academy acting students will be performing the one act play, “Trifles”, by Susan Glaspell. Directed by the new performing arts teacher, Jared Porter, the cast members have been rehearsing tirelessly in the new Bailey Center. AHN actresses will be competing this piece in the district One Act Festival at USF. The One Act Festival consists of 30 minute plays, or one acts, performed by high schools within the district to receive awards and potentially move on to perform at States (a statewide Thespian competition) later in the year.

“Trifles” is a one-act play set in 1916, in a small farmhouse after a murder has taken place. Interestingly, the one act is based off of a true story that author, Glaspell, experienced. Gender is the central motif of the play; “Trifles” is seen as an example of an early feminist drama.

“My character is really difficult because he’s so socially awkward. It is definitely taking some acting skills to really portray him correctly,” said Mooney.

As the fall season draws closer to November, Porter sat down with Achona to answer a few questions about the show and his first year at Academy.

Achona: What made you choose “Trifles”?

Jared Porter: “Trifles is a nugget of theatrical goodness. There is so much in this play to talk about, so our cast and crew will be holding a talkback with the audience after the performance on Nov. 29th. One way to state the theme is: Never underestimate women. Interestingly, our all-female cast is taking on the roles of the men in this play, just as men used to take on the roles of the women in Shakespeare’s day. Also, everyone loves murder mysteries.”

A: How do you think Trifles will do at the one act festival?

A: How has your first year been at Academy so far?

JP: “I love being at AHN. We’ve got something special going on here, and I love where we are headed.”

Porter opened “Trifles” auditions to his advanced acting class. Five roles were cast and one stage manager was appointed. All of the actresses are new to the world of Thespians. This will be the first time competing at the district level for all cast members (besides Stage Manager, Julia Barreto).

The cast of “Trifles” includes:

The cast will rehearse for a short two months before taking the stage. Much detail goes into putting the show on. The cast, along with Porter, are responsible for the set, costuming, lighting, and sound. The one act’s runtime will be around 25-30 minutes.

“It’s a really cool experience because it’s the first one act I’ve ever been in. The storyline is really interesting especially because we go to an all girls school. It’s going to be a great show, so everyone should come out and support,” said Oehler.