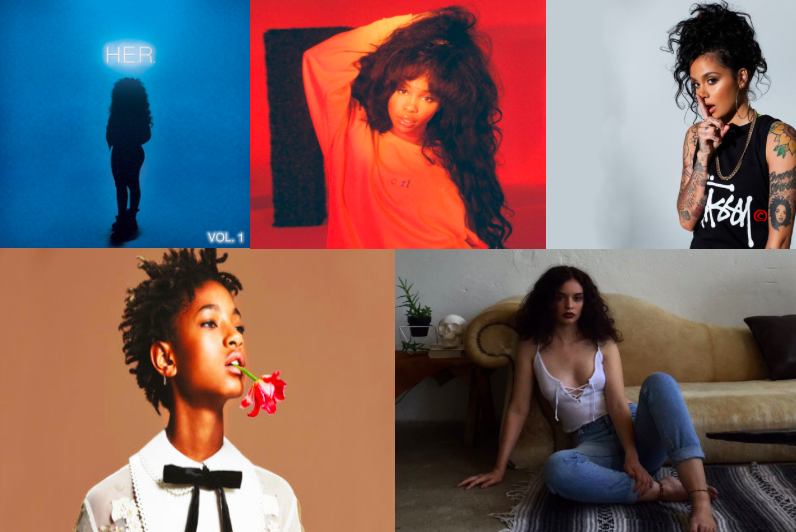 Whitney Houston, Beyoncé, Jill Scott, and Alicia Keys are some of the top female R&B artists.

Sabrina Claudio, a Florida native, began gaining attention through Twitter and Youtube as she would upload short clips of her singing. Claudio released her first EP called “Confidently Lost” on SoundCloud in 2016. In early October of 2017, she released her first album called “About Time” which is currently number five on iTunes “Top Albums” list. Claudio is currently touring with R&B/ hip hop artist 6lack and will be performing in Orlando on Nov 27, 2017.

Pwania Taylor (‘18) says, “I really loved how she moved from Miami to Los Angeles to pursue her music career, she really stepped out of her comfort zone. What I love about her music is that it’s so different and how she has different messages. My favorite song [by her] is ‘Too Much Too Late’”

Gabi Wilson, also known as H.E.R., was introduced to the spotlight at a young age. Wilson was considered a child prodigy for her ability to sing and play the piano, bass guitar, and drums. When Wilson was 11 years old, she performed at New York’s Showtime at the Apollo and live on “The View.” Wilson released her first EP called “H.E.R. Volume 1” in September 2016 and her second EP “H.E.R. Volume 2” in June of 2017. The stage name H.E.R. stands for Having Everything Revealed.

Willow Smith, daughter of Will and Jada Smith, began acting at seven years old. Smith released her first single “Whip My Hair” at just nine years old; the song went platinum. The young, alternative R&B singer expresses her passion for finding individuality which reflects in her music. Smith’s songs may not always follow a certain rhyme or rhythm like most R&B songs. Smith released her newest album “The 1st” on Oct. 31, 2017.

Tress Jacobs (‘20) says, “What I like about Willow Smith is that she went from “I whip my hair back and forth” to “Is the sky really blue?”

Contemporary R&B singer, Kehlani Ashley Parrish, was the lead singer in a group called PopLyfe. The group auditioned in the sixth season of “America’s Got Talent” and placed in fourth. Parrish studied ballet and modern dance at the Oakland School for the Arts but an injury redirected her to study in the music department. In 2014, Parrish uploaded her first mixtape on SoundCloud called “Cloud19.” The following year Parrish released her second mixtape, “You Should Be Here” which became #5 on US Billboard’s “Top R&B/Hip Hop Albums.”