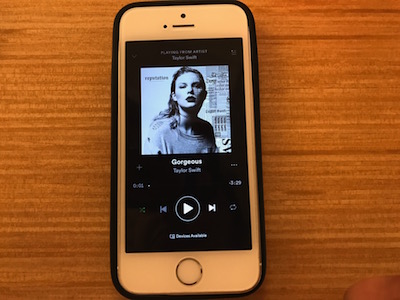 “My favorite song is “Don’t Blame Me” because I like the beat and it has a nice chorus. She is talking about the past, but she is not dwelling over it anymore. It’s not like her old pop its like modern, realistic music and it’s something new from her.” says Lauren Sellers (’18).

“Look What You Made Me Do” was the first single from the album to be released followed by “…Ready For It” and “Gorgeous.” The most recent song to be released was “Call It What You Want” which came out on November 3.

#reputation is out now. Let the games begin. https://t.co/oExj2XFGvH pic.twitter.com/GzA6cTEwjf

“I feel like this album has a much darker feel, which I really like. Even the album cover is darker in a way. I like this album more than all of her other albums. “This Is Why We Can’t Have Nice Things” is my favorite song on the album right now,” says Elena Schillinger (’18).

On November 11, Swift was the musical guest on the popular variety show “Saturday Night Live” hosted by Tiffany Haddish. Swift performed “…Ready For It” and “Call It What You Want.”

“Look What You Made Me Do” is my favorite song so far from the album. I think Taylor broke away into something different in this album, like she was being more independent,” says Maddie Chandler (’19).

“Reputation” is available for purchase on the iTunes Store. It is, however, not yet available on Spotify or Apple Music. Swift plans to keep the album off of streaming services for at least the first week of its release.

Carly Finley (’19) says, “My favorite song is definitely “Getaway Car.” I feel like she just does’t care what anyone thinks anymore, she is just doing what she wants now and I think that that is a great. I don’t really care if the album is not on any streaming services because she can do what she wants, and I am a big fan so I would buy it anyway.”