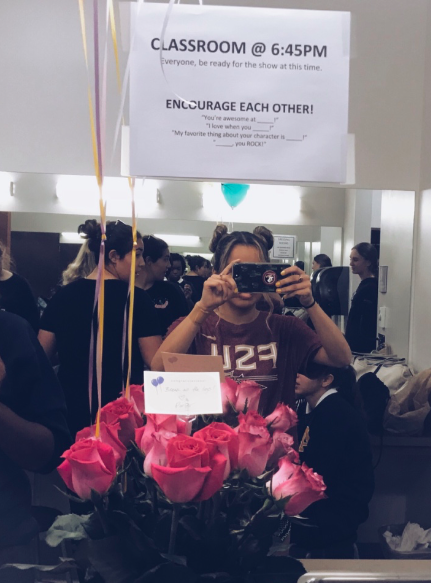 Although tech week was stressful for most of the cast, Mr. Porter bought his class flowers and put up inspiring signs in their dressings rooms to keep a positive aura within the group of actors.

13 girls taking the semester long acting course taught by acting teacher and director, Jared Porter, have taken on the task to perform a full act play with only two and a half months of rehearsal, class, and practice time. The actors performed on Thursday March 22 and Friday March 23, 2018, in the Bailey Center for the Arts. Monday, March 19 through Friday, March 23 was the actors “tech week” which involved rigorous hours of rehearsal on the set of the play to perfect their performance, costumes, and hair and makeup.

The actors’ call time is 6:30, giving them 30 minutes to change into their act I costumes, put on their makeup, and do their hair. Every actor must get into the mindset of the character they are playing in order to have a smooth run through of the entire play. Kelly Hoffman, the middle school play director, sat in to watch the full length play and gave the actors criticism at the end of their run through.

The actors lost four hours of rehearsal time due to a heavy rain and tornado warning. Although the safety measures were necessary, the lost time had to be made up before their first performance in two days. Every actor was required to study their lines, ques, and entrances individually in order to continue perfecting each act along with their costume change timings for the next rehearsal.

The loss of four hours on Tuesday was made up on Wednesday morning. The actors did not have a smooth rehearsal since they were missing two male actors who could not attend the morning practice. The afternoon practice was professionally photographed in order to print and post pictures of the actors in time for the opening night. Wednesday was the last rehearsal in which the full cast could perform their play, start to finish, within the designated time frame.

Every cast member was in their designated dressing rooms by 5 P.M. preparing their hair and makeup for their first performance. At 6:45 P.M. all the cast members met in the acting classroom in order to inspire each other and create a high energy level to transfer into the audience. The play started a couple minutes late in order to allow more audience members to arrive and ran two hours, ending at 9:30 P.M. After the show, every prop, outfit, and script had to be back in place for Friday’s performance.

The set 3 acting class period was at the end of the day on Friday and the cast spent the class going over lines that were missed during the previous performance, folding playbills for the shows guests’, and catching up on rest from the tiresome week. At 5 P.M. the cast was readying their hair and makeup for one last performance. Before the performance, the cast did activities to warm up their articulation and character rolls for the show. Once the play had ended; all cast members got to take home the outfits, accessories, and makeup that belonged to them.

The acting class will be striking the set which entails returning everything borrowed, taking home any lent props, and taking the set apart. This will require an hour or more in order successfully clear the stage and all props or set equipment used for the show.