“A Star is Born” Hits Theaters 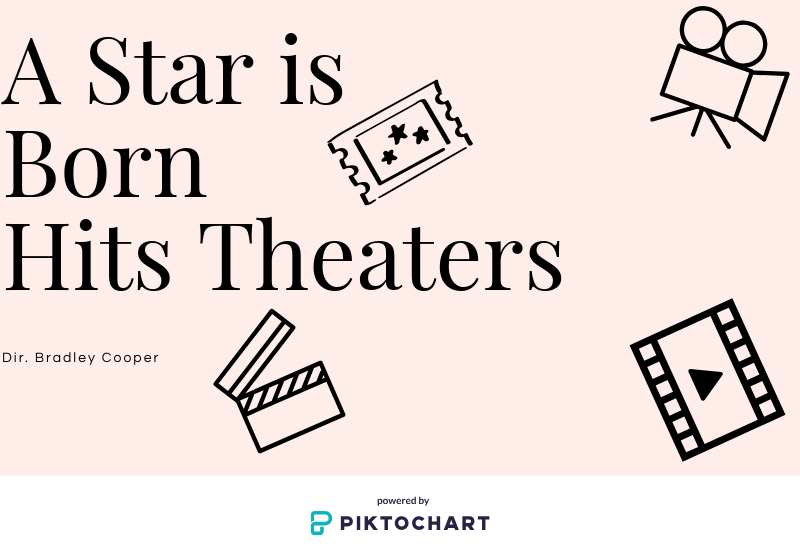 Originally, the “A Star is Born” was to be directed by Clint Eastwood, starring Bradley Cooper alongside Beyonce rather than Lady Gaga.

On October 5, 2018, the anticipated new film “A Star is Born” was released in theaters, earning $44.255 million in North America alone and $57 million worldwide in its opening weekend. The film features Lady Gaga and Bradley Cooper as its leading duo, with the latter playing the role of both actor and director in respect to the project.

The story follows Ally (Lady Gaga), a struggling waitress with a passion for performing, as she is discovered – and pursued – by famous singer Jackson Maine (Bradley Cooper). The pair’s ensuing relationship is put to the test as they must face the rise of Ally’s fame in the midst of Maine’s struggles with alcoholism and addiction, as well as the downfall of his own career.

A post shared by A Star Is Born (@starisbornmovie)

“I haven’t seen the movie yet, but I’m so excited to go see it. I’m waiting for the perfect time. When I first saw the trailer, I was already blown away by Lady Gaga and her voice. I already knew the movie was bound to be amazing. I think the story is timeless and such an interesting, engaging concept that is really pertinent to what is going on in the music industry right now. I’m excited to see how they handle it all. I’m also just really eager to see Lady Gaga’s acting. I saw her when she was in “American Horror Story: Hotel,” and though I didn’t like the season, I think she embodied her character so well. I already know she has what it takes to pull off this role,” says Amelia Cuttle (’21).

What younger audiences may not know about the movie is that it is a modern adaptation of a story which has been adapted for the big screen on multiple occasions over the past 80 years. The film’s first rendition was released in 1937, and it starred Janet Gaynor and Fredric March as its would-be infamous troubled lovers. In following decades, the film went through two subsequent remakes, with Judy Garland and James Mason taking the lead in the 1954 adaptation, and Barbra Streisand and Kris Kristofferson in 1976.

Of course, the films have each established their own take on the story, contributing something different with each remake. For example, the original film included the main pair as actors instead of singers and was not a musical at all. Gaga refers to the story itself, and her and Cooper’s endeavor to recreate it, as not necessarily a “remake” but instead as a “timeless legacy.”

So. A Star Is Born. I know we all knew it was going to be good but it’s spectacular. The two of them are pure magic onscreen. The audience was in tears within minutes. I’m jealous of every person who gets to see it for the first time today. I’ll be singing these songs for months.

The project not only marks Gaga’s acting debut, but Cooper’s directing debut as well. Despite the pair’s seeming inexperience in these respective fields, many predict the film will be the “movie to beat” at the Oscar’s in the next coming months. Since the film’s release, it has received much traction in the way of both praise and criticism, earning its spot as the pop culture headline of the week.

“The movie did a phenomenal job of including various pertinent subject matters that populate our sphere of current societal issues. Through the gradual unfolding of events, the movie opened up conversations about mental health, addiction, and the inevitable cost of being in the limelight. Matters pertaining to fame, its implications, and its impact have become extremely prevalent with the rise of social media. Likewise, the topic of addiction is a reflection of the opioid crisis that continues to ravage our nation and thousands of families. Essentially, the film effectively becomes a time capsule of the issues and concerns that were relevant within American society during its production,” says Hira Kahn (’19).

Not only has the film itself received this attention, but so has its accompanying soundtrack. The album is heading for No. 1 on the Billboard 200 Albums Chart along with having four of its songs in the iTunes top five best sellers this past week. This would be Gaga’s fastest ever move to No. 1 and the most of her songs to ever be in the top five at once.

Me crying to the A Star is Born soundtrack rn pic.twitter.com/9O29qbYvZ0

Caroline Lamoureux (’20) says, “I haven’t been able to see the movie yet, but I’ve listened to the soundtrack so much already. There was so much hype surrounding it that I decided to listen to it the day it came out, and honestly all of the hype is completely substantiated. The songs are so well written and Lady Gaga’s vocals are unbelievable, especially in songs like ‘I’ll Never Love Again.’ I was blown away. I was also really surprised at how well Bradley Cooper can sing and how well their voices work together.”