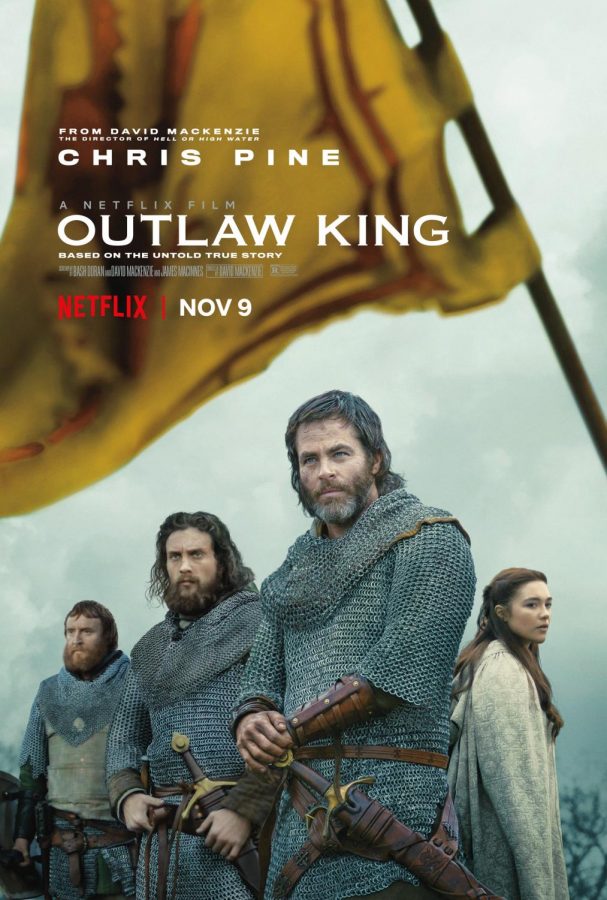 Pine tells Entertainment Weekly about learning to master the Scottish accent: “It was difficult to get an accent to be organic that is so foreign from my own. There were particular sounds that I stumbled on, but also just getting the musicality of the language down. I didn’t want it to be a movie about an accent; I didn’t want people to not believe I was Scottish, but I also couldn’t draw too much attention to it and away from the story.”

On November 9, 2018, Netflix released the drama and action film “Outlaw King” starring Chris Pine and directed by David Mackenzie—one of the first major film adaptations of Robert the Bruce’s story. Mackenzie’s film “Hell or High Water” was nominated for Best Picture at the 2016 Oscars in which Pine had a role (Toby Howard).

“Outlaw King” is based on a true story which tells the tale of Robert the Bruce’s (Pine) fight to gain back Scotland’s independence from the English after William Wallace was defeated at the Battle of Falkirk. After Robert the Bruce murdered his closest political rival John Comyn, the English described this as “outrageous sacrilege inhumanly committed against God and the holy Church,” which struck a conflict between Scotland and England. However, the film also contains elements of rebellion, betrayal, and love.

Qemamu Reddick (’21) said, “I think it was kinda gory a little bit, but it was interesting. The storyline was pretty good, and I liked the ending. I think my dad liked it [Reddick watched “Outlaw King” with her dad]. It was just something that was on. I think Chris Pine did a good job of embodying the Scottish king.”

The film had a $120 million budget, and Forbes believes it was a wise choice to exclusively release this film to Netflix subscribers. If it had been at the box office, it may not have brought in much revenue due to audiences taking a break from the several popular spring and summer movies such as “Avengers: Infinity War” which was released April 27. Also, advertising “Outlaw King” as a Netflix original film is cheaper than operating a global advertising campaign, as Netflix can run ads to its subscribers promoting the movie.

Caroline Lamoureux (’20) adds, in contrast, how it would play out if Netflix original movies went to the box office, “I think it kinda depends on how they would distribute it. The only problem with streaming services is that you can watch anything as many times as you want, when in comparison, if you put a movie in theaters, then you can pay for as many times as you watch it, but I think honestly that’s Netflix’s decision.”

Reddick believes “Outlaw King” would have done well at the box office as well: “Maybe going to a box office might have been better for them [Netflix]. It was a good movie.” Reddick also comments that movie theaters will not be nonexistent in the future. “I think movie theaters will still be relevant because sometimes you just want to go out and see a movie with your family. I think regular movies being created are better to see at the movies.”

The fight for Scotland has begun. #OutlawKing is now on @Netflix and in select theaters. pic.twitter.com/RL92G6JWVT

“Outlaw King” lasts for two hours and is rated R, so it contains violence and nudity. If bloody films associated with war and history are not what you like, then I would not recommend this film. It was gruesome, but it made the story being told very real. Although there is romance between Robert the Bruce and his wife Elizabeth de Burgh, it does not encompass the entire movie.

Within two minutes of the movie, I realized I had to insert subtitles in order to follow along with the movie more carefully, and it proved to be helpful, especially in the beginning and because the characters have British or Scottish accents.

At first, I was not captivated by “Outlaw King” because it was focusing on why the Scottish wanted independence from the British, so there weren’t entertaining battles or romance, but it went uphill from there. A slow start resulted in a strong finish. Pine, although born in California, embodied Robert the Bruce very well. His Scottish accent was believable, and he carried the film, allowing the audience to easily cheer for the Scots. I found myself rooting for their victory.

Lamoureux has not seen “Outlaw King,” but it is on her list of must watches: “I love Chris Pine. It’s kinda the only reason I would ever watch that movie. I think he’s a good actor. I like the films he’s in. It just seemed kinda interesting. I just have to give it more thought. I like movies in general. I’ll watch anything pretty much. I like Netflix. I like the idea of streaming services, especially in today’s technology world.”

I'm not ashamed to say that by the end of #OutlawKing I was openly weeping. For the sheer emotion of the film, the way it represented our people & our history, the parallels with modern Scotland & our worst enemy being ourselves. Thank you to everyone involved. Love it.

However, although this film has upsides, it could be boring to those not not fond of history films or war. This was not a relaxing movie because of the constant battle, but, nevertheless, I still enjoyed it. I feel it was a great choice to make “Outlaw King” a Netflix original because, personally, I would not pay to see this film in theaters. So, I found it easy to sit and watch this at my house and not have to drive to the movie theater.

On Rotten Tomatoes, “Outlaw King” scored a 57% on the Tomatometer and a 77% audience score. Overall, this movie targets a specific audience, typically older audiences, but it all depends on what movie genres you prefer.

Haven Todd (’20) watched solely the trailer of “Outlaw King.” “I thought the main character [Chris Pine] was really cute. That is probably why I watched it [the trailer]. Other than that, I don’t think if I saw it on Netflix, without the trailer, I probably would have clicked on it, to be honest, because it just looks like that’s not my style of movies. I wouldn’t say it’s targeted towards older people, but I mean more than teens maybe. [However] I love Netflix. There is always something different on there, so I think it just expands your genre.”