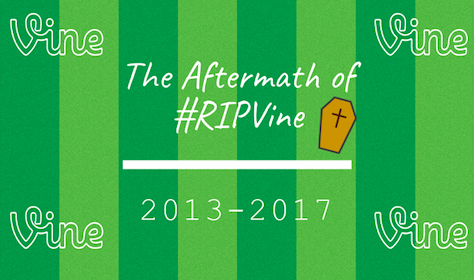 The Aftermath of #RIPVine

Monday, Mar. 25 kicked off spirit week with Meme Day, in which students dressed as their favorite meme or Vine.

Vine was a video app consisting of a maximum time of six-second videos, owned by Twitter, which was launched in 2013. Before Vine’s shutdown, YouTube was not popular, whereas videos on Vine were trending and received millions of views, such as the famous “Charlie Bit My Finger” video.

Shawn Mendes is one of several celebrities who began their fame on Vine. As of December of 2014, he possessed 3.4 million followers on Vine, in which he produced six-second videos of him singing song covers and of his own material. Because of it, he signed with Island Records and released his first EP (an extended play record).

Elizabeth Gold (’21), who enjoys listening to Mendes’s music, said, “I love Vine. I watched Shawn Mendes when he was a Vine star, and I watched his YouTube covers. I feel like since it [Vine] was super big at the time, and still kind of big now if you go on YouTube, it was the new thing, so everyone was watching it. And if you saw it [videos] in your feed, you could just click on the profile, [and they] gain followers. I feel like all social media goes through a phase where it’s like the ‘hit thing.’ I guess that one [Vine] was because people would laugh and then show their friends and then [it] just spread. I am upset that they shut down Vine. Vine is dead.”

YouTube, however, now features several influencers who began on Vine. Among them are Brent Rivera, Logan and Jake Paul, Cameron Dallas, Josh Peck, and Nash Grier.

I'm not saying they are correlated, but the numbers don't lie. #RIPVine pic.twitter.com/Q9cI6gif3T

However, social media exploded after Twitter announced in October of 2016: “In the coming months we’ll be discontinuing the mobile app [vine].” This occurred because of Twitter’s lack of popularity, and, as a result, had to fire nine percent of its staff to be more profitable and, at the time, there was potential the company would be sold.

Also, the then, and continuing, rising influence of Instagram and Snapchat (owned by the parent company Facebook) were threatening Vine’s dominance and was slowly decreasing in popularity as Facebook, Instagram, and Snapchat all offer enhanced video-making capabilities.

Lauren Harris (‘19) said, “I wasn’t a big Vine person [fan]. I feel like Vine was just kind of like Instagram, but it was just videos. I [also] feel like people watched Vine over YouTube, but then Vine made [certain] people famous, and then they went to YouTube to make more videos. I was actually kind of sad when Vine ended because now I always want to go and see Vines. Now, I have to look them up on YouTube. [However] Vine was like snippets [of videos], and now with YouTube you can make it however long you want to, so I feel like there are other things that are similar to Vine, so I think bringing back Vine would just be a waste.”

Nevertheless, devoted Vine fans responded with negative reactions and continue to reminisce about famous Vine videos and references with #RIPVine throughout social media.

Kira Cardillo (’22) said, “I do watch the #RipVine videos on YouTube. I feel like since they’re [the videos] so short that’s what kind of made them so funny, so just like one funny thing and then it ended. [However] Instagram, Facebook, and Snapchat took over. If it was still around today, I think it would have stopped being popular eventually even if it didn’t get shut down. I don’t know what my favorite Vine is. There’s so many. I can’t think of one. I like all of them.”

Because of the creation of Vine, brilliant musicians, actors, and comedians were able to express their talents in six-second videos which propelled them into “the Hollywood industry.”