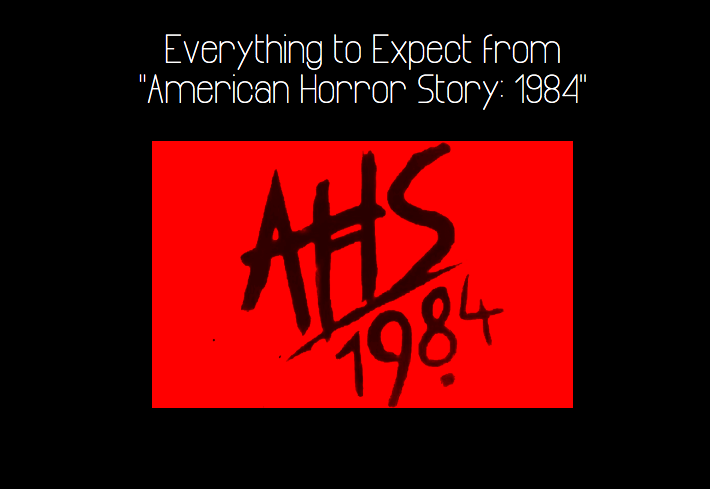 With the long awaited release of season 9 of “American Horror Story: 1984” finally underway, fans are introduced to a world of horror film cameos, new faces, and the return of jazzercise! (Photo Credit: Georgia Ruffolo/Achona Online)

With the long awaited release of season 9 of “American Horror Story: 1984” finally underway, fans are introduced to a world of horror film cameos, new faces, and the return of jazzercise! (Photo Credit: Georgia Ruffolo/Achona Online)

Everything to Expect from “American Horror Story: 1984”

One of America’s most popular television anthology series, “American Horror Story”, has returned for its ninth season titled, “1984”. This year’s season is said to be influenced by classic eighties horror films, such as blockbusters “Halloween” and “Friday the 13th”. Lovers of the show have openly expressed both their concerns and eagerness for the ninth season turnout. The season premiere happened last week on Sep. 18.

This year, the audience is re-introduced to Emma Roberts as Brook Thompson, Billie Lourd as Montana Duke, Leslie Grossman as Margaret Booth, and Cody Fern as Xavier Plymouth, along with some new faces, such as “Glee” star, Matthew Morrison as Trevor Kirchner, and Olympic skier, Gus Kenworthy as Chet Clancy. John Carroll Lynch is also set to make a comeback as this season’s villain, Mr. Jingles. Lynch is more famously known for his previous role as Twisty the clown in season four, “ American Horror Story: Freakshow”.

Maeve Miller (’21) said, “I am really curious to see how this season does without Sarah Paulson and Evan Peters, as their characters bring in the most attention from the show’s viewers. Personally, I don’t think it’s a bad idea since it allows the new actors to create a name for themselves instead of being hidden in their shadows. To me, it’s rather refreshing to see some new talent.”

Set during the summer of 1984, five friends decide to leave their hometown of Los Angeles and head for Camp Redwood, where they will become counselors for a children’s summer camp. Before they leave town, one of the seasons main characters, Brook Thompson (played by Emma Roberts) is attacked by Richard Ramirez, better known as the Night Stalker. Throughout the episode, the audience is informed of Camp Redwood’s gruesome history, as it is home to the massacre of 1970 that was carried out by camp janitor, Mr. Jingles. The slasher stories of Mr. Jingles, told by camp leader Margaret Booth (played by Leslie Grossman), the lone survivor of the attack, come to life as the main characters are informed of his escape from a mental institution. With two killers out on the loose and thirsty for blood, the rest of the season is set for an exciting plot.

Leslie Sanchez (‘22) said, “Based off of what I saw, I did think that the first episode was a pretty good, but I wish there was more action involved. It just seemed a bit slow for my liking, only because the previous seasons had such exciting first episodes. However, I still think this season is going to turn out to be one of my favorites.”

Over the course of the episode, there are multiple references to many Hollywood classic horror films. The most famous reference alluding to “Friday the 13th”, a story about the slaughter of children as they’re away at a summer camp. Also, we see a reference to “Halloween”, where Mr. Jingles, similar to Michael Meyers, escape from a mental institution and return to their  familiar towns to seek revenge. Furthermore, the gas station scene and its striking similarity to “Texas Chainsaw Massacre”, where the attendant, both portrayed as older men, advise a van full of teenagers to turn around before it’s too late. As the episode comes to a close, Brook Thompson is seen covered from head to toe in mud as she narrowly escapes the hands of her second attacker, looking almost identical to the famous clip from “Carrie”.

Which horror movies will get some love from AHS? (via @rm0030) https://t.co/GjkCLpodRy

Due to the lack of success from the series’s last season “Apocalypse“, the crossover from the show’s first and third seasons, fans are skeptical of what creators Ryan Murphy and Brad Falchuk are capable of bringing to the table. However, with the current fad of “all things eighties” quickly growing thanks to the Netflix hit “Stranger Things” and the return of scrunchies, crop tops, and mom jeans, many expect “1984” to be the next big hit.

Joely Barkett (‘20) said, “I really think that this season has the potential to be one of the best, considering that the last three seasons, in my opinion, weren’t that great. Last year’s season did not meet my expectations at all, as was left very unsatisfied. I feel that they totally blew a really good story line, so I hope that doesn’t happen again this year.”