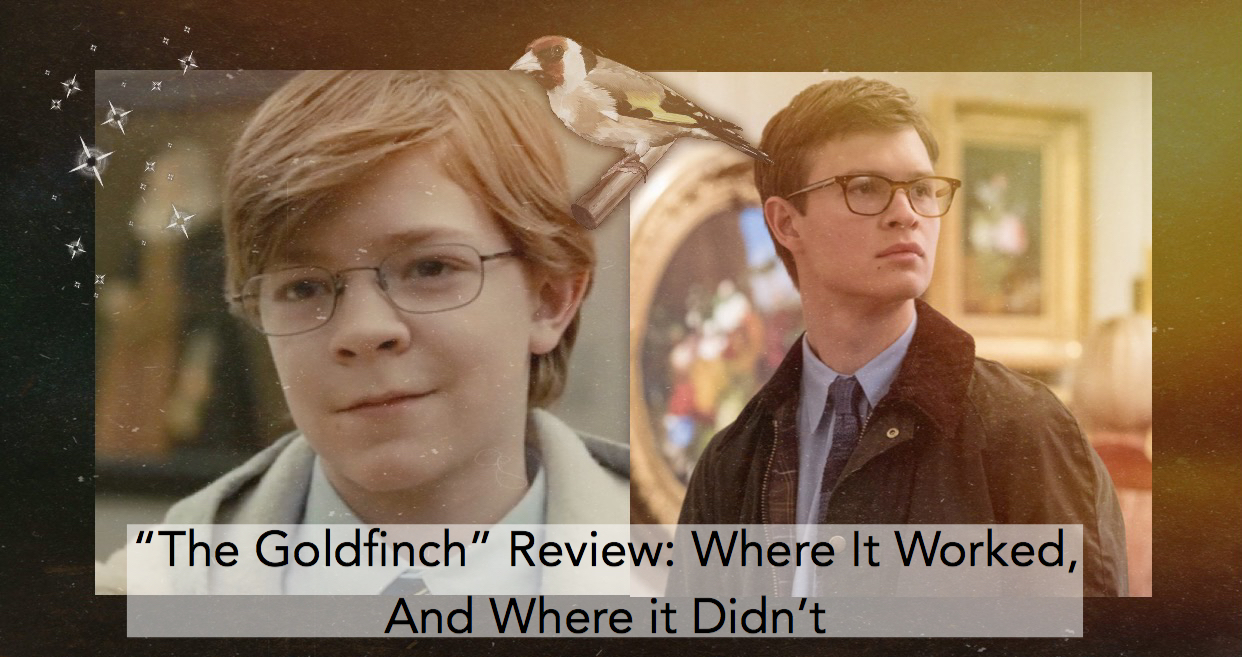 “The Goldfinch” was released on September 13, 2019 to a low box office opening and poor critical praise.

With a Pulitzer Prize award for fiction, Donna Tartt’s novel, “The Goldfinch”, has been loved, cherished, and praised by many. The recent film adaption, released last Friday, September 13th, was hoped to meet that same acclaim. And, with a star-studded cast and an intriguing trailer, it was expected to, as well. However, with a current Rotten Tomatoes score of 26% and a Box Office debut of $2.6 million, the film has already been deemed a “disaster”  and criticized as an “attractive forgery”.

But, is the movie really that bad? And, if so, why? How did a movie so destined for greatness so terribly fail? After seeing the film myself, I can say that “The Goldfinch” is not at all a “bad” movie, but it’s certainly not a great one either. With a wonderfully curated score and cinematography, the film looks and sounds spectacular, but dreadfully falls short on the execution of its storyline and purpose. Therefore, while it wants to give its viewers a genuine, heartfelt portrayal of love, loss, and pain— it instead provides them a slow-paced, nonsensically ordered bunch of scenes that make you want to feel for the characters, but never really end up giving you a reason to.

me avoiding all the bad reviews of the goldfinch because i'm gonna go see it regardless. pic.twitter.com/ZAHNiuQ06w

To understand where a movie like “The Goldfinch” went wrong, you first have to understand what it was trying to do. Based on an almost 800-page novel, there was no possible way that the movie could stay completely true to the book. In order to be a proper book-to-screen adaptation, it had to cut out a good chunk of the story and focus on the most valuable moments of the novel. However, while the movie was in fact comprised of the most important parts of the book, it forgot the reason why those parts were essential in the first place. A sad scene will always be a sad scene, but without any depth or development toward them, we can never truly care about them. A scene where a character is doing something simple may not be entirely vital to the plot, but it does give insight and feeling to that particular character. It tells us more about that person, what they are like, and what they feel outside of the main plot. It helps us, as an audience, to connect with them, so when those sad, “important” scenes do happen, they matter.

Samantha Cuttle (’20), noting this, said, “I honestly felt like I was watching a movie that was spark noted. Despite it being almost three hours, all the symbolism and depth was lost because nothing felt fleshed out.”

The movie may have successfully reproduced the plot, but it did not properly provide those same feelings and emotions as the novel once did.

As briefly touched upon, the movie’s main struggle is its storyline and how to execute it. Beyond just an over all lack of depth, the movie’s timeline makes absolutely no sense. The movie goes back and forth between the young and old version of the characters, and it honestly gives you more of a headache than the deeper perspective it was likely trying to achieve. I also found myself wishing the story to stay completely focused on the younger character’s parts of the story while I was watching the older ones. Looking back, this can be greatly contributed to the fact that the younger versions were given much more development than the older ones were, but it also goes right back to the wacky timeline I mentioned earlier. Had the movie been in proper chronological order, eventually changing from young to old, not only would it have simply made sense, it would have given more power to the twists and turns at the end of the movie. An example of a movie that did something like this was May 2019’s “Rocketman”, that followed a young Elton John until he, all in one scene, morphed into an older one. If “The Goldfinch” followed this same pattern, it could have fixed many of the wrongs of the movie.

It’s not all bad, though, because the film does do a lot of things right. Though a bit too long, the movie manages to be pretty enjoyable. It also wasn’t entirely purposeless, and in the end, at least parts of its meaning stuck with me. Both of these sentiments could have been tremendously better had the movie fixed its recently mentioned errors, though.

Agreeing with this statement, Maddie Glaum (’21) says “I enjoyed every minute of ‘The Goldfinch’, whether that enjoyment came from satisfaction with the movie or poking fun at its flaws. As a form of entertainment, it succeeds. As a movie, not so much.”

However, the movie does have some things about it that are consistently great, including its cinematography, score, and cast. The movie, aesthetically, is undeniably beautiful. Every scene is wonderfully crafted and produced and simply mesmerizing to look at. One particular moment in the film that was notably pretty was when Oakes Fegley’s Theo and Finn Wolfhard’s Boris jumped into a pool. Another great part of the movie was its score. It was beautiful, fit perfectly, and was very impressive. The film’s cast was also excellent, including award-winning actors such as Nicole Kidman, Sarah Paulson, and Jeffrey Wright. Each and every performance featured in the film was extremely sincere, potent, and often touching. Despite being placed in a poorly functioning storyline, the actors did their best to bring light and life to their characters.

In the end, “The Goldfinch” doesn’t fail in every place, but the places it does fail are the places that are most critical in a good film. A great cast, cinematography, and score can help make a movie fantastic, but they can’t save a movie without a properly executed storyline. That said, “The Goldfinch” is not an awful movie, and deserves some credit where credit is due. It manages to be enjoyable, fun to watch, and overall heartwarming.

When shown the trailer for film and asked whether or not she would wish to see it, Asha Sneed (’21) says “I think this would definitely be an interesting movie for me to watch. The trailer looked very well done and the story it showed looked both entertaining and thought- provoking. It helps that I also see some great actors listed as well!”

If I were you, I would not turn down an offer to go see “The Goldfinch”, but don’t expect ultimate perfection. “The Goldfinch” will certainly make you sad and ignite a spark inside of you, but had it been done a little bit differently, it could have ignited an entire flame.

Well. Ya know what. I’m gonna say it. I liked The Goldfinch.