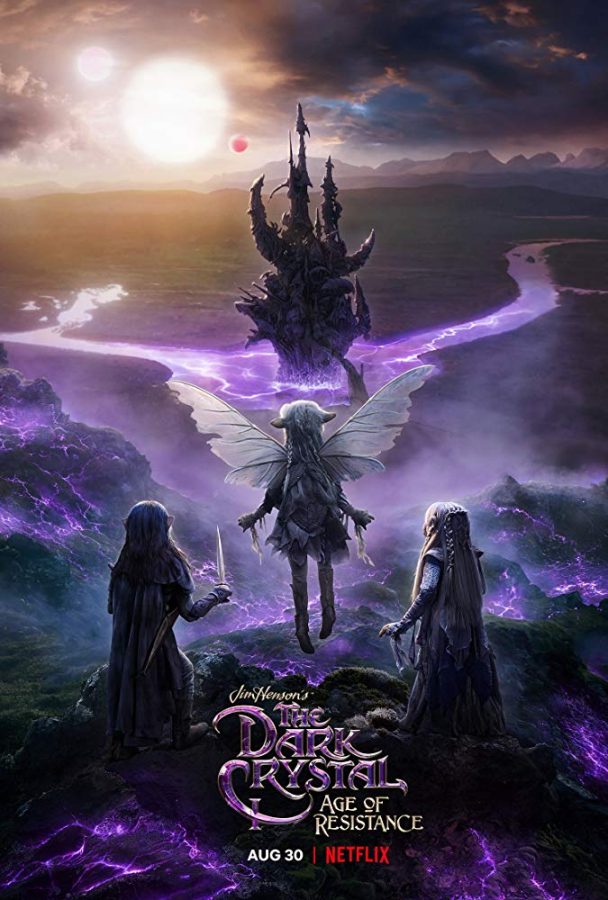 Jim Henson’s original movie “The Dark Crystal” focused on a spiritual journey. The prequel of this 1982 movie focused on how others strive to fight for equality.

Jim Henson’s creations of the puppets and animatronics brought a sense of adults who were passionate about childhood imagination and pursued their ideas into a film. The prequel show of the original 1982 movie  “The Dark Crystal” was released as “The Dark Crystal: Age of Resistance” this August.

The original movie took place in the dystopian world of Thra. The main characters, Jen and Kira, are the only Gelflings left. The genocide of their people, created by the Skesis, created a world of greed and chaos. The overly grotesque looks of the Skeksis, wearing Victorian Era clothing could be associated with the wealth they seem to not share. The Gelflings went on a journey to find the missing shard and restore peace and serenity to the once wonderful world of Thra.

The producer of “The Dark Crystal”, Jim Henson, was also the producer of “The Muppets”, and many of his puppet creations paved the way for animatronics. Math teacher David Bland said, “I mean it wasn’t bad for what it was at that time. You know, it was just a step above claymation.” However, through this new show, his interns and apprentices honor his memory by keeping alive the imagination and innocence of the original movie.

“The Dark Crystal:Age of Resistance” is a prequel to the dystopian world of Thra. The Dark Crystal is unbroken, providing and life giving. The land of Thra is healthy, and the elements of nature are bursting with color and detail in each land, just like the elements. It shows how the greed of the Skeksis corrupted the nurturing, life giving crystal, and literally broke it. The Gelflings are thriving in Thra, living alongside the Skeksis, who have yet to sacrifice them for their own immortal source. Like the original “The Dark Crystal”, famous actors are voicing the  puppets, and puppeteers are acting out the movements, which also includes CGI. The detail on the puppets is so minute, the puppeteers can move the face to create over two-hundred facial expressions.

The casting for “The Dark Crystal: Age of Resistance” features Taron Egerton, Nathalie Emmanuel, and Mark Hamill. Along with those famous stars, comedians Andy Sandberg and Michael Key are side characters providing comedic relief. With these top star celebrities, the producers can appeal to more people that will watch it due to them.

Clare Mooney (‘20) said, “That looks so neat. The animation on the puppets look so real. I love Taron Egerton so I will definitely try it out.”