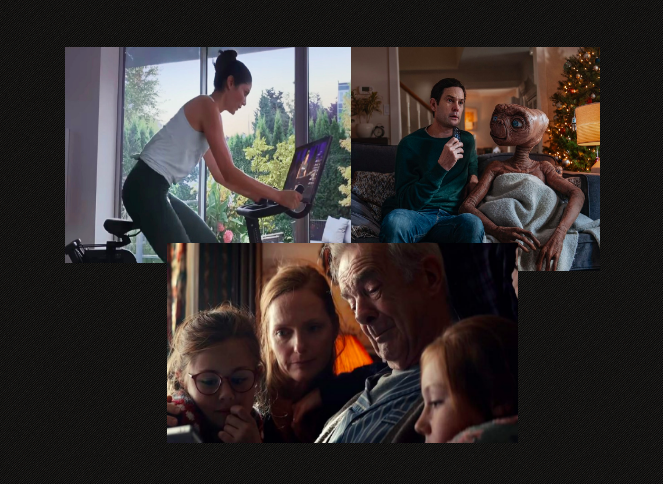 ’Tis the season for advertisers to warm the hearts of families everywhere with holiday-inspired commercials. Not only do consumers benefit from these holly jolly TV ads by finding the perfect gift for their loved ones, the major corporations they’re buying from benefit just as much due to company sales reaching their highest during every holiday season.

Every year, Apple manages to tug on the heartstrings of viewers everywhere through their sentimental ads. This year’s ad titled “The Surprise”, designed to show off the capabilities of the iPad, begins by following a family on their holiday road trip. In the back of the car are two arguing sisters who immediately cease all complaining as soon as the iPad comes out. When the family arrives to their grandparents house, they are greeted by their grandfather who is still mourning the loss of his wife. While wreaking havoc throughout the house, as children do, the girls come across old family photos, most of them being pictures their late grandmother. Sweetly enough, the sisters create a slideshow on the iPad of family memories as well as a slide of their grandmother at the end, which they present to their grandfather as a gift.

Another ad that hit close to home for many millennials and eighties movie lovers was Xfinity’s E.T. ad titled “A Holiday Reunion”, where the world’s favorite alien comes back to Earth (unfortunately, not for a sequel). The ad begins with two children in the middle of a snowball fight who come to realize that something has fallen out of the sky and right into their backyard when they notice ominous but quite familiar flickering of Christmas lights and surge of electric toys. The audience is then taken inside the house where Henry Thomas, the actor who played young Elliot in Steven Spielberg’s 1982 blockbuster film, who is now an adult with a family of his own, is shown with the look of disbelief of his face. At this time, the children move to the backyard to find whatever it is that caused the commotion only to discover something unimaginable; an alien. Elliot then runs out into the backyard where he is reunited with his long lost friend and introduces him to his family while also informing E.T. that a lot has changed since his last visit. E.T. is welcomed into Elliot and his family’s home, where the children expose him to the wonders of technology, such as Xfinity’s streaming availabilities. The ad is made complete by incorporating E.T.’s theme song in the background as well as recreating the movie’s most famous scenes, such as the screaming first encounter, the beloved gravity-defying bike ride, and the final finger-to-heart touch where E.T. says, once again, “I’ll be right here”.

Danielle Finster (’20) said, “As someone who grew up watching older films like E.T., I nearly jumped through the roof with excitement the first time I saw this ad. At first, I really though they were going to do a sequel. If I’m going to be honest, I think that’s why everyone else was so surprised by it, too. I think it was very clever of the creators to capture the audiences attention by bringing back this all time favorite.”

Amidst the controversy the company is currently facing, Peloton released a holiday-themed commercial as well, highlighting the home-based spin bike’s versatility. The ad titled, “The Gift that Gives Back”, opens with a woman being led by her daughter on Christmas morning to the living room of their home, where her husband reveals her gift. “A Peloton!”, the woman exclaims (which can be debated was either in fear or joy). The women then begins to document her fitness journey with her new Peloton via vlogging, which the audience couldn’t determine, based off of her questionable facial expressions, whether she was enjoying or despising her workout. An article released by Buzzfeed said that people online have even compared the woman’s blogging a hostage video. As the ad continues, the woman uses her new gift religiously as she vlogs her rides after work, at 6 am, and even into the spring as the snowy background transforms into vast greenery. As the commercial comes to a close, the woman says in her final video documentation, “A year ago, I didn’t realize how much this would change me”, further adding on to the ad’s oddity by creating a rather sexist message. Video editor and writer for Washington Examiner, Siraj Hashmi, tweeted, “Nothing says, “Maybe you should lose a few pounds” by gifting your already thin partner a Peloton”. As the viral commercial turned out to be a total flop, Peloton’s stocks dropped 10%. Roughly a week later, Peloton came forward and defended their ad by saying they were “disappointed in how some have misinterpreted it”. Furthermore, a spokesperson for Peloton told CNBC. “Our holiday spot was created to celebrate a fitness and wellness journey.” The chaos caused by the ad eventually led the actress portraying the woman to come out and blame her “overly expressive eyebrows” for the confusion as she swears the companies intentions were nothing but good.

Julianne Hahn (’20) said, “Although I know the company had no intention of creating a negative message, their execution of marketing their product was not their best as it has many misleading undertones and, if I’m going to be honest, is kind of creepy. Better luck next year, Peloton.”