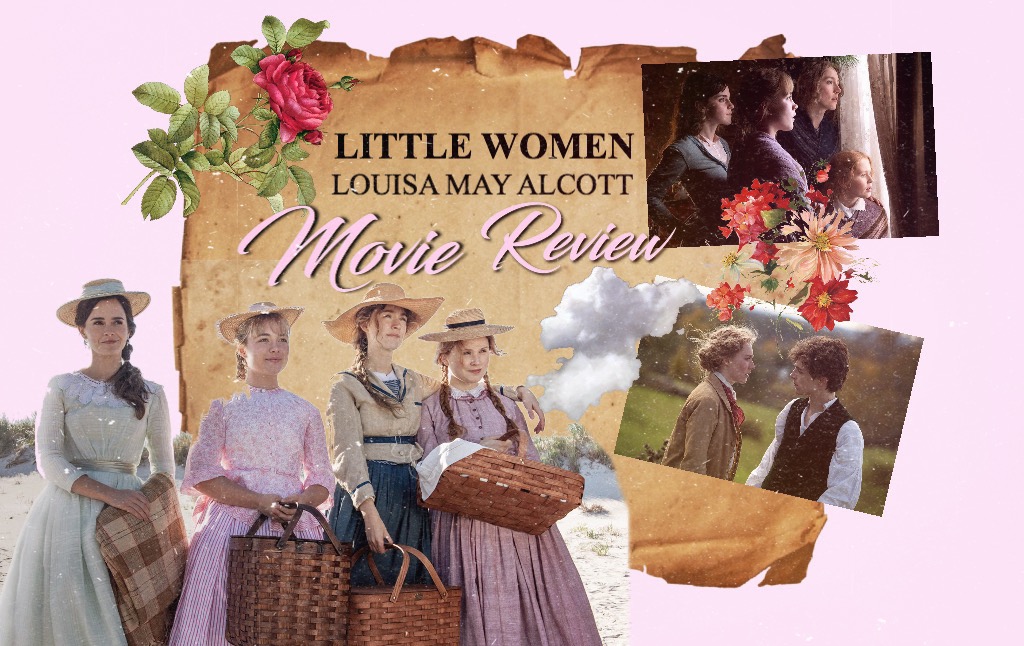 “Little Women” is not set to release in theaters until December 25, yet Multimedia Media Editor Adriana James-Rodil and Contributing Staff Writer Amelia Cuttle saw a Sony Advanced Screening of the movie. As a result, this review explains why “Little Women” is such a timeless classic and why people of all ages and genders should go see it.

“Little Women,” a novel first published in 1868 and written by American Author Louisa May Alcott, tells the story of the March sisters — Meg, Jo, Beth, and Amy — and their mother, “Marmee,” while their father is fighting in the Civil War. The family lives in somewhat impoverished conditions in Concord, Massachusetts, and the novel touches on thematic elements such as stereotyping, personal growth, the necessity of work, sacrifice, family, and love.

Although “Little Women” is a fictitious, coming-of-age novel, Alcott based it on her own life. Meg is the oldest daughter who is a talented actress and the first to marry: Anna Alcott. Beth likes music: Elizabeth (Lizzie) Alcott. Amy is the youngest and a talented, “aspiring painter:” May Alcott. Finally, Jo March is the second oldest and “a brash, ambitious and funny tomboy who is determined to become a famous writer.” Jo is a reflection of Alcott herself.

Like in the book, the Alcott sisters grew up poor, and had to help support the family. However, Alcott’s form of contribution was different: writing. When in 1868 a publisher asked her to write a book for girls, Alcott was reluctant, but she agreed because her family needed the money. She wrote in her journal, “I plod away although I don’t enjoy this sort of thing. Never liked girls or knew many, except my sisters, but our queer plays and experiences may prove interesting, though I doubt it.”

In a way, we have to thank the publisher who pushed Alcott to write a “girls’ novel” and for her family’s need for money. It gave the world a beautiful story: “Little Women.”

From being described as “rich, warm . . . and passionately devoted” as well as a “superb adaption of the source,” the first responses to Greta Gerwig’s “Little Women” have been fantastic — and for good reason too.

After her wonderful, critically acclaimed doctoral debut film “Ladybird,” Greta Gerwig’s return to screen has been a long awaited venture. What better film for it to be than “Little Women”? Beyond directing, this film’s star studded cast, including Oscar nominees, Saoirse Ronan and Timothée Chalamet, has been heavily applauded. In regards to the depiction of the characters in the novel, each actor was perfectly casted. However, more so, their work in the film was simply wonderful.

Raquelle Elson (’23), after viewing the trailer says, “It looks amazing. And just from watching the trailer, I can see that it has a very good message. Also, Emma Watson is like my favorite person, and she is an inspiration and activist, so it makes sense that she’d be in this movie. Also, Meryl Streep is just amazing.”

Each performance was radiating with so much emotion and power, and made for a movie that felt truly, unapologetically human.

From the perspective of Cuttle (who has not read the novel nor seen previous adaptations).

Without having read the book, “Little Women” is, in every sense of the word, breathtaking. Emotion and life were bursting from the script, with each scene having a true, lively purpose. Every feeling that was depicted in the film bounced off into the audience, making each moment while watching it incredible.

Despite its antiquated origins, it still managed to feel relatable — and most importantly, relevant. Nothing was lost in translation between eras and everything felt astonishingly authentic. It was also, from a technical standpoint, superb. The score was beautiful and enhanced each scene in powerful ways. The cintempography and aesthetic are both beautiful, as well as the costumes.

When asked about her own connection towards the novel, Lori Kearney, high school history teacher and moderator of Academy’s Women in Film Club, she said: “I was given the book by my mother for Christmas when I was probably about seven years old. It was this huge, thick book. It was one of the most expensive things I have ever owned. My Mother used to, at night, read ‘Little Women’ to me and my sisters, and that’s how we read the book.”

I intend to make my own way in the world.”

She also mentioned her opinions on the trailer for the new film: “I never think the movie is as good as the book. I would say the book is better because it’s much more detailed and you create these images in your mind. I mean, I don’t think [the trailer is] anything spectacular. I would actually be interested in [seeing] Meryl Streep play Aunt March, but the young actresses, I don’t find them dynamic. I really think the person that plays Jo has to be a mix between having some very female attributes, but at the same time having some very masculine attributes. She is a very strong mix of those two things, and I think it is very hard to find someone who can do that.”

Due to the novel’s incredible fame, there are many who also share in Kearney’s opinions because there are many people who were touched by the novel in the same way she was. This is why Gerwig had a terribly large job to accomplish. She had to take one of the world’s greatest novels and not only make it beautiful, but just as special.

However, despite Kearney’s and many others’ fears and worries, “Little Women” managed to please both unfamiliar audiences and beloved fans alike.

From the perspective of James-Rodil (who has read the novel and seen previous adaptations: MINOR SPOILERS).

In the 151 years since the book’s publication, there have been several movie, television and Broadway show, opera, and ballet adaptations. And from the perspective of someone who has read “Little Women” and seen the 1994 film adaptation starring Winona Ryder as Jo March, Gerwig’s film surpuasses it as the most authentic, powerful, and beautiful yet.

Firstly, Gerwig chose the movie’s location to take place in Concord, MA, (including small surrounding towns) to emulate the book’s setting. This decision alone made the movie more real as the audience becomes convinced that the actors are in 19th century Massachusetts.

In addition, the movie flashbacks between the past and present, which could have been confusing for non-readers. However, Gerwig dictates the flashbacks in a way that are comprehensive and understandable and contrast the happy childhood bliss with the often hard and troublesome present.

Childhood scenes are filled with sunlight and smiles, whereas the March’s struggling adulthood is filled with grief, grey skies, and gloomy tones at times. However, the film comes full circle at the end when the whole March family is engulfed in sunlight and happiness yet again in Jo’s inherited house.

Gerwig also included the most important events from the book which touched on important thematic elements, but also added her own scenes and empowered the March sisters more than Alcott could have done during her time.

At the beginning of the film, it is importantly noted that pressure by her publisher and society caused Alcott to not write Jo as a “literary spinster,” like herself, but to marry her off. The publisher states, “If the main character is a girl, make sure she’s married by the end . . . or dead. Either way.”

In the book, Jo, with no doubt, loves her independence and refutes marriage, yet once she marries, it seems out of character and sudden. However, Gerwig captures Jo’s change in attitude towards independence and marriage with, arguably, the most impactful words in the film: “I just feel like women have minds and they have souls, as well as just hearts. And they’ve got ambition, and they’ve got talent, as well as just beauty. And I’m so sick of people saying love is just all a woman is fit for. I’m so sick of it, but I’m so lonely.”

Being independent and a powerful, successful woman does not combat marriage and love, but it goes hand-in-hand. Jo comes to this realization in this emotional scene between her and her mother. It is ok to love and be loved, even in the midst of pursuing a career.

Gerwig also gives more power and ambitious feelings to the other March sisters, Meg and Amy. Amy’s true passion and pursuit of greatness in becoming an artist is a bit downplayed in the novel, which serves a greater purpose that is revealed in the film. Amy states while a child, “I want to be an artist in Rome and be the best painter in the world,” a sentence which would have seemed inappropriate, improper, and intolerable in 19th century America.

And while away in Europe with Aunt March, Amy takes painting lessons, but she realizes, now as an adult, the inability for her to have a successful career as a painter and focuses on getting married instead. She says, “I’m just a woman, and as a woman, there is no way for me to make my own money, not enough to earn a living or to support my family. And if I have my own money, which I don’t, that money would belong to my husband the moment we got married, and if we had children, they would be his, not mine. They would be his property, so don’t sit there and tell me that marriage isn’t an economic proposition because it is. It most certainly is for me.”

This captures what Alcott was trying to indirectly imply in “Little Women” when Amy’s dream of becoming a famous artist dwindled away as an adult.

Similar to Amy, Meg, in the book and movie, is a talented actress, yet her talent is overshadowed by marriage. However, Meg is different from Amy in the sense that she did not want to pursue acting. Meg always wanted to get married and have children, which she explains to Jo saying, “I want a home and a family. Just because my dreams are different than yours, it doesn’t mean they’re unimportant.”

This is so powerful and reinforces the message that whether a woman chooses to be a stay-at-home mom or a writer or lawyer does not make her less independent or more successful. Being an independent and strong woman is not dependent on job occupation or marital status, so long as she has the right to choose.

This film captures these themes in a truly beautiful, human way that Alcott did, although it is less obvious because of the time period she lived in.

Greta Gerwig’s “Little Women” was able to take a historic story and make it not only relatable, but relevant. Today, more than ever, there is a place in cinema for films like “Little Women.” It is relentlessly feminine and perfectly human, reminding audiences of the same message Alcott wrote 151 years ago.

The struggles of Jo March, her sisters, and her family reflect a timeless lesson about the conflicts in a woman’s life. There is a reason why Gerwig’s rendition has been praised so much — and it because there is a heart and soul within the film that each person who watches it can connect with. Like the book it’s based on, “Little Women” is timeless. Whether through scene structure, acting performances, directoral tactics, and beyond, from start to finish, “Little Women” is a movie that finds a place within your soul and stays there forever.