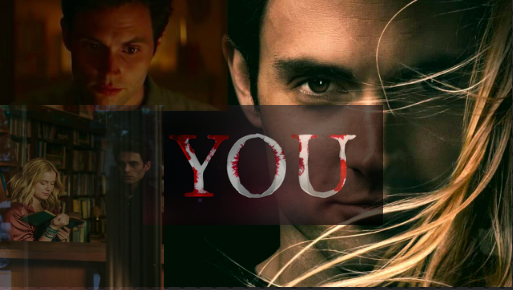 What are YOU watching?

Why the New Netflix Series is Growing in Popularity

How far would you go for love?

The entertainment platform Netflix has had great success with its originals in recent years.  Some of the most popular shows include: “13 Reasons Why”, “Stranger Things”, “Black Mirror”, “Orange Is the New Black”, and, now, “You”.

First airing in late 2018, “You” is a psychological thriller that follows Joe Goldberg as he navigates his affections for season one’s Guinevere Beck and season two’s Love Quinn. Season one is based on the novel “You” by Caroline Kepnes while season two was developed from Kepnes’ followup novel, “Hidden Bodies”. For those who are unfamiliar with You, here is a rundown of the two seasons:

Upon meeting NYU writing student Guinevere Beck at his bookstore, protagonist Joe Goldberg becomes obsessed and feeds his infatuation by stalking Beck’s social media, learning about her past, kidnapping her ex-boyfriend, and tracking her location, all in an effort to create the perfect relationship for the two of them. Joe violently tries to remove obstacles from Beck’s life in order to keep them “happily” together. Once Beck becomes suspicious of Joe’s behavior and his past, he begins to panic and takes extreme measures to conceal his criminality through numerous deaths and meticulously framing other characters. Joe stands out as a hero with a murderer complex. Joe is depicted as tender and fatherly towards his young neighbor, Paco, and is portrayed as doing the wrong thing for the right reasons. Although he is a merciless, obsessive serial killer, the audience still finds themselves empathizing and justifying his behavior, enacted in the name of love.

Joe becomes more dangerous as he conceals himself under the pseudonym Will Bettelheim, an identity stolen to fit Los Angeles, his new city. Although reluctant after the demise of his last relationship, Joe finds new affection in upcoming chef Love Quinn. Haunted by his ex-girlfriend and challenged to keep up with LA, Joe finds himself trapped between old habits and longing for a fresh start. This season also includes flashbacks of Joe’s past, creating a more complex characterization of Joe and his violence.

“I feel like, surface level, it’s extremely bizarre and disturbing and something that will never actually happen to someone. It’s one of those things where you say, ‘That would never happen to me’, but then there’s that twinge of reality where there’s the realization that there are people in the world that are like this,” said Megan Hughes (‘20).

You has topped the charts in popularity. Of the top 20 most streamed series of 2019, “You” ranked number nine. It also received positive criticism. Guardian critic James Donaghy wrote, “It is smart enough to let us know that to sympathize with Joe is to be complicit in his crimes. Every time you feel you’re being drawn in, the show pulls the rug from under you and reminds you that he is not the romantic hero you are looking for.” The series also earned a 92% in Rotten Tomatoe’s critic ratings for its second season.

We start to empathize with him, ‘Oh, poor serial killer, his life was so messed up,’”

You reflects the horror of a psychological drama with the romanticism associated with serial killers. The nuances in the series make the story even more chilling, Independent writer and viewer Roisin O’Connor detected, “You’s” trailer actually uses a version of Cheap Trick’s song “I Want You to Want Me”, which [is] featured at the end of “10 Things [I Hate About You”]. The slow-tempo rendition also recalls the music used in the creepy stalker-fest that is the “Fifty Shades franchise”, which seems deliberate.”

Why is this terrifying, violent series so popular?

The fascination surrounding serial killers possibly aroused from industrialization; urbanizing, and containing a population in a constricted, communal space. That mass concentration breeds fear among small, shared spaces and the suspicion that discreet neighbors are harboring secrets. The public sees profit from the account of this fear, producing several tv-series’ and movies like “Breaking Bad”, “The Making of a Murderer”, and “Extremely Wicked, Shockingly Evil and Vile”. Diving into the minds of these predators exposes audiences to the barbaric fantasies and inner demons of such sociopaths. However, there is something unusually intriguing about the mystery of these murders’ minds.

“People want to be wanted or needed…the unknown or what could be or the totally-out-there fascinates people. Every episode makes you want to keep watching. There are redeeming qualities about him, but at the end of it he thinks that all he wants is to be loved,” said guidance counselor Emily Pantelis.

Joe: everything I did, I did it for you
Beck:#YouNetflix #You pic.twitter.com/wPtwvvMRLY

Although unsettling, the public is fascinated by the façade of serial killers. In the case of Ted Bundy, an infamous murderer, American women found themselves not only overcome by his charm and blatant peculiarity (although that may be on account of his narcissism and murderous hobbies) but his attractiveness and were curious regarding the trauma that made him into such a monster. Bundy was sexualized more often that feared, exploiting the social prejudice that the pubic wouldn’t suspect a young, handsome white man of committing such murders. Similar to “You” itself, Bundy could have been prevented from continuing his killing-spree in Florida if he had been held and condemned in Colorado, where his crimes first began. This parallels season one and two of “You”, as Joe Goldberg travels from New York to Los Angeles with no trail of consequences from his previous conquests.

As “You” parallels the crimes of Ted Bundy and Joe exhibits characteristics of other infamous serial killers, the strike of reality makes the story even more horrifying. One of the most terrifying aspects was Joe’s ability to online-stalk his girlfriend and create a profile for her, using social media accounts a majority of the public utilizes.

“I think the first season got people hooked because they were thinking, ‘What if this could actually happen?’ because of the social media aspect. He was able to access every one of her social media accounts, see everything she was doing, deep dive into it, and make up this character for her,” said Pantelis.

You has been listed as number five of Netflix’s 2019 most-streamed shows. After the second season was released in December 2019, the series trended on twitter for hours worldwide. You has been renewed for a third season, expected to air in April 2021.