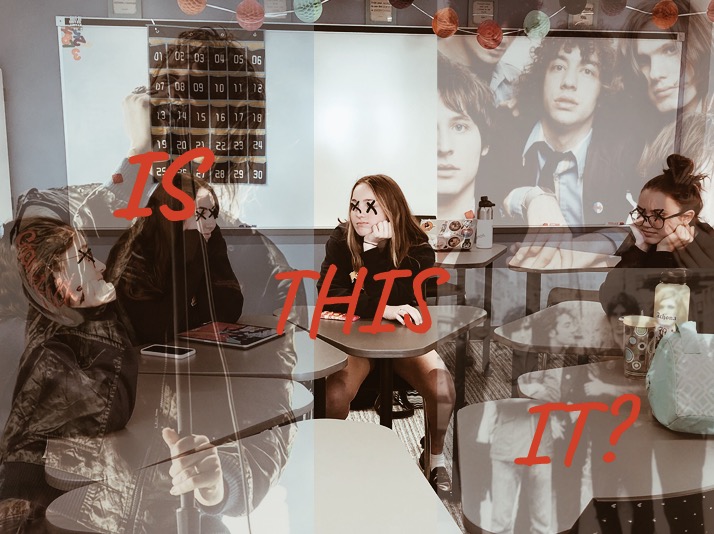 The Strokes are set to release a new record, “The New Abnormal” sometime this year, following the delivery of two singles: “Bad Decisions” and “At The Door.” Sophomore Sophia Garcia said, “I’m excited to hear some new stuff from The Strokes. I can’t really tell what direction they’re going in musically because the two singles have had such a different sound, so I’m excited to see what they can do.” (Photo Credits: Sydney Wills/Adobe InDesign/Achona Online)

The Strokes are set to release a new record, “The New Abnormal” sometime this year, following the delivery of two singles: “Bad Decisions” and “At The Door.” Sophomore Sophia Garcia said, “I’m excited to hear some new stuff from The Strokes. I can’t really tell what direction they’re going in musically because the two singles have had such a different sound, so I’m excited to see what they can do.”

Are The Strokes The Saviors of Rock?

When a garage rock band’s debut album provokes the press to deem them “the forefathers of a bold new era in rock,” and the “saviors of rock and roll,’ they essentially have nowhere to go but in a downward spiral to irrelevancy. In today’s modern age and the nature of music journalism, the accumulation of “hype” around an album, especially a debut, can be an artist’s plague.

Yet, The Strokes were the exception to these truths. When they released their iconic 11 track debut in July 2001, “Is This It,” it instantly received shocking amounts of critical and commercial acclaim- acclaim that has seemed to last them throughout the past nineteen years.

However, much of the album’s infamy is not due to its sonic perfectionism, but the flawless timing of its release. “Is This It” came in a time of generational need, as the garage rock sound and guitar music in general was beginning to die down following the collapse of Britpop. “The Rolling Stones” published a magazine with a cover featuring a guitar on a tombstone, music critics from every corner of the earth were declaring the death of rock n’ roll: the world was starving for a refreshing take on indie rock.

Avid listeners today are often harsh on the album and deem it unworthy of its praise and notoriety, essentially taking it for granted due to an ignorance of what it represented for music at the time. The Strokes had just surfaced with their ‘The Modern Age’ EP, popping up in record stores and floating to the top of the indie scene. The five members, with both their look and sound, represented exactly what people wanted to see from the indie rock scene and revived its popularity.

While The Strokes did get lucky with the timing of their release, the album is still extremely quality sonically and worthy of praise. With “Is This It,” they managed  to avoid the fake million dollar studio sound of many garage rock bands of the past, sticking to minimal production methods and iconic vocal distortion techniques to create their simple yet rhythmic and refreshing sound.

The Strokes’ US label at the time heard the album for the first time and criticized it, saying that it sounded unprofessional and that the vocal distortion was ruining Casablanca’s voice. However, these qualities are exactly what made the album so iconic and refreshing and allowed it to stand the test of time.

“Is This It” wears its influences shamelessly on its sleeve, yet still allows The Strokes to make the sound their own unique entity. Frontman Julian Casablancas establishes his iconic nature as a rock leadman, what with his unique and powerful lyrical delivery throughout the album.

He also employs storytelling lyrical techniques to provide listeners with small pieces of his time in NYC, pieces that eventually deviate into a larger picture of a young man’s trials and tribulations in a big city. These techniques give the record a youthful vibe while expressing grander themes of Casablancas’ perspective on life and his nonchalant ‘nothing more nothing less’ attitude towards existence.

The minimal nature of the songs further reflect these themes: on the opening track “Is This It,” a swell of instruments occurs around the “Is this it?” chorus exclamation, heightening the feeling of a nonchalant lack of fulfillment.

On the album’s fourth track “Barely Legal,” Casablancas croons, “I should have worked much harder, I should have just not bothered,” expressing the dichotomy of caring or not as a young person, especially considering the unfulfilling nature of life continually expressed on the record.

Similarly, fifth track “Someday” builds cute, emotive vocal melodies and subtle but very existent walls of sound as Casablancas reflects on the past before its even reached him, in a sort of chilled out, apathetic way. The song continually deconstructs the idea of unity as he sings, “Alone we stand, together we fall apart,” completely contradicting the typical idea of the phrase “united we stand together we fall.” This just contributes to the apathetic, nonchalant, ‘I’ve sort of given up but I don’t care’ atmosphere of the album.

These minimalistic, nonchalant perspectives on daily life are backed by youthful, breezy guitar melodies and articulately placed riffs that further these concepts.

The album is also conceptually heavy with parallels that express the duality of all aspects of life and the pointlessness that this evokes. On “Alone, together,” the title in itself is a juxtaposition of two parallels. The arrangement of sound and riffs constantly pull listeners between two sounds, essentially placing them at the center of a sonic parallel. Casablancas sings, “Life seems unreal, can we go back to your place,” again juxtaposing the depressing laments on life he’s making with a carefree attitude.

Following their most recent 2013 album, “Comedown Machine,” many people were wondering ‘Is This It’ for The Strokes? The answer is no, as they are set to release a new record, “The New Abnormal” sometime this year, following the delivery of two singles: “Bad Decisions” and “At The Door.”

Thus, the Strokes are not the singlehanded saviours of rock n’ roll. They are not the second coming of the Velvet Underground. Simply, The Strokes are a group of five music fanatics who made an exceptional debut album that released at the perfect time, allowing them to, in their own unique Strokes-esque way, revive the popularity of indie garage rock. They came along at the perfect time and captured a generation’s imagination with their fantastic melodies and youthful hooks, essentially lighting the torch for many bands to come.