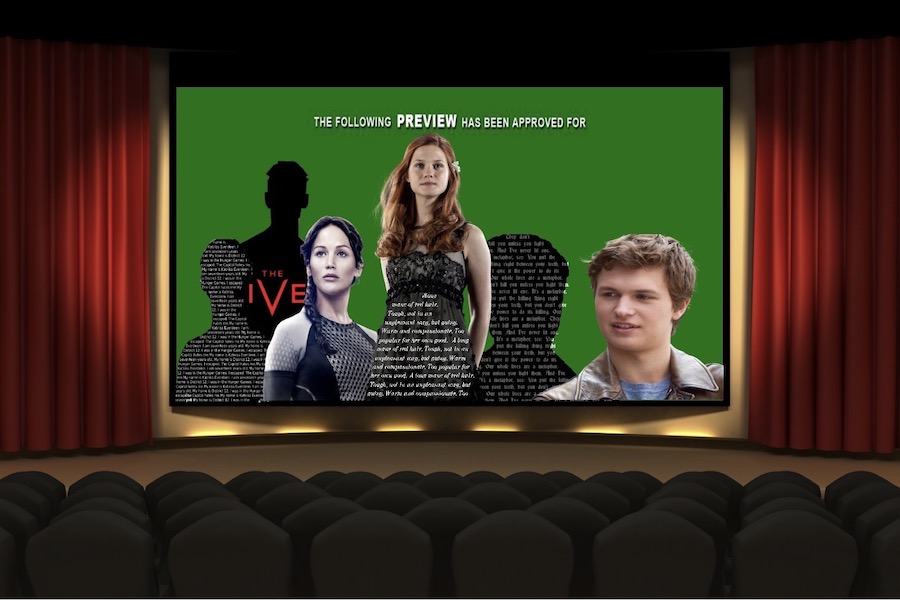 When novels are adapted into movies, the most poorly executed part of the film tends to be how a character is brought to life. (Photo Credit: Raquelle Elson/Achona Online/PiktoChart)

When novels are adapted into movies, the most poorly executed part of the film tends to be how a character is brought to life.

When a great novel is written, many production companies vie for the rights to adapt it into a film. Through the adaptation process, however, many important details from the books are left out and the quality of iconic characters are left up to chance.

I have watched all of these movies, except for “Harry Potter and the Chamber of Secrets,” and was either thoroughly impressed or disappointed by the adaptations. I selected these adaptations by looking at my bookshelf and picking my favorite and least favorite, which is why these are ranked by how well the characters were portrayed in the adaptation.

“The Hunger Games,” a 2012 adaptation of Suzanne Collins 2008 dystopian novel by the same name did a fantastic job of depicting the extravagant world of Panem. A movie adaptation of “The Hunger Games” was impressive enough, being that the book was so outlandish and very specific, but the actors also had incredibly complex characters to portray, and did so very well. Jennifer Lawerence did an exceptional job of capturing Katniss Everdeen’s character. Katniss came from a home of pain and struggle, with only one friend to turn to. Once she was out of her element, so to speak, she seemed standoffish towards anyone she interacted with, a trait that was expanded upon and portrayed impeccably in the movie adaptation.

Best: Juliet Sykes, Before I Fall

The 2010 Goodreads Choice Awards YA novel “Before I Fall” by Lauren Oliver was adapted into a movie in 2017. Although I do not particularly like this adaptation as a whole, I must give credit where credit is due. Juliet Sykes’, the school outcast, portrayal stays true to the character from the book. After a falling out with the school’s “it girl,” Lindsay Edgecombe, Juliet was subjected to constant torment that drove her into a depression. Her character has such an eerie presence that makes you feel like she might snap at any moment, and she does. For a character in such a horrendous adaptation, she was very well done.

Best: Augustus Waters, The Fault in Our Stars

“The Fault in Our Stars,” a 2012 Young Adult novel by John Green, was adapted into a film in 2014. “The Fault in Our Stars” tells the tale of an epic love story between cancer patient Hazel Grace Lancaster and Augustus Waters, a boy she meets at her support group. Being that this novel is notorious for molding many teenagers’ outlook on love, one of its best developed assets was its portrayal of Augustus Waters. Played by Ansel Elgort in the film, Gus’ charisma and his outlook on life, such as his infamous cigarette metaphor, really swept Hazel Grace off of her feet. Lines such as ““I’m on a roller-coaster that only goes up, my friends,” helped “The Fault in Our Stars” gain its prestige, and most of them were said by Gus. By using many Gus’ quotes from the novel, this adaptation managed to bring Gus to life incredibly well in the film.

I guess “okay” will be our “always”.
-Augustus Waters

“My favorite part of Augustus Waters’ character was his generosity and understanding of Hazel. Although confident, strong, and charming, Gus put all physical flaws and past diagnoses to the side when it came to Hazel. He saw her for who she really was, and throughout the novel was a confidant for Hazel. He brought out the best side of her, something the reader had not seen in the novel. I just loved that,” said Estella Colquett (‘23).

In 1993, Lois Lowry wrote the incredible first book of her quartet series, “The Giver.” 21 years later, this incredible novel was poorly adapted into a movie. This adaptation put far too much emphasis on the wrong details and turned a thrilling adventure novel into a forced love story. In this futuristic novel, everyone is assigned a job at the age of 12, but this age was changed to 16 in the movie. At the age of 16, Jonas Last, the main character, was selected to be the Receiver of Memories, the person who contains all of the memories of the past or the time we know as the present. In the book, Jonas was 12, which added to the fear one felt for this young boy. In the movie, Jonas is 16, which makes one think he could fend for himself unlike a 12-year-old. When Jonas realizes the horrible truth of the world he lives in, he instantly escapes. The addition of a love story unnecessarily divided Jonas’ attention, and took away from this incredible novel.

“I do think that as a character he is very brave, determined, and strong. You can see these traits throughout the whole movie, and how many times he risked his life so everyone could get their memories back. In the book he was a revolutionary, and a beacon of change and unity not division.  Although, I do think that the actor of Jonas was a bit reluctant to really portray the full potential of the character. He is cute, but a bit too soft looking for the character,” said Isabel Salas (‘24).

An all-around mediocre adaptation, the 2016 film “Miss Peregrine’s Home for Peculiar Children,” destroyed the incredible character of Emma Bloom that was constructed in the 2011 book by Ransom Riggs. Emma Bloom was the main love interest in the book and one of the most interesting characters, but she was demoted to a background character in the film. This upset many fans of the novel, including myself, because Emma was a strong and complex character, but wasn’t explored in the film. In the novel, Emma had the ability to make fire with her hands, a peculiarity that was given to Olive Elephanta in the movie. Along with this peculiarity, Emma also had an affair with the grandfather of Jacob Portman, the novel’s protagonist, many years before Jacob was born. These character traits gave Emma incredible depth, and storylines. In the adaptation, however, none of this was expounded about, making Emma seem bland and boring.

Worst: Ginny Weasley, Harry Potter and the Chamber of Secrets

The beloved 1998 novel “Harry Potter and the Chamber of Secrets” was adapted into a movie in 2002. The second installment in the Harry Potter series illustrates Harry’s second year at Hogwarts School of Witchcraft and Wizardry as many new dilemmas are thrown his way. Although this adaptation was widely accepted by the “Harry Potter” fanbase, most were incredibly disappointed by its portrayal of Ginny Weasley. Throughout the series, Ginny was extremely intelligent, outspoken, brave, and independent. However, Ginny’s portrayal in the film lacked character and substance aside from being Harry’s love interest. In the movies, Ginny lacked spunk, spark, and depth. Boiling her character down to her relationship with her male counterpoints discouraged many of the young girls who read this series as a child.

“In the movies, Ginny lost any characterization she had other than being a love interest and a sister. She became very bland and her interactions with other characters suffered because of it,” said Madison Kwo (‘23).

I said it when I was 12 & I'll say it again now that I'm rereading the books. The Harry Potter movie franchise did Ginny Weasley dirty. Where is her personality? Where is her actual relationship with Harry and not just a few extremely awkward kisses? Where are her witty remarks?