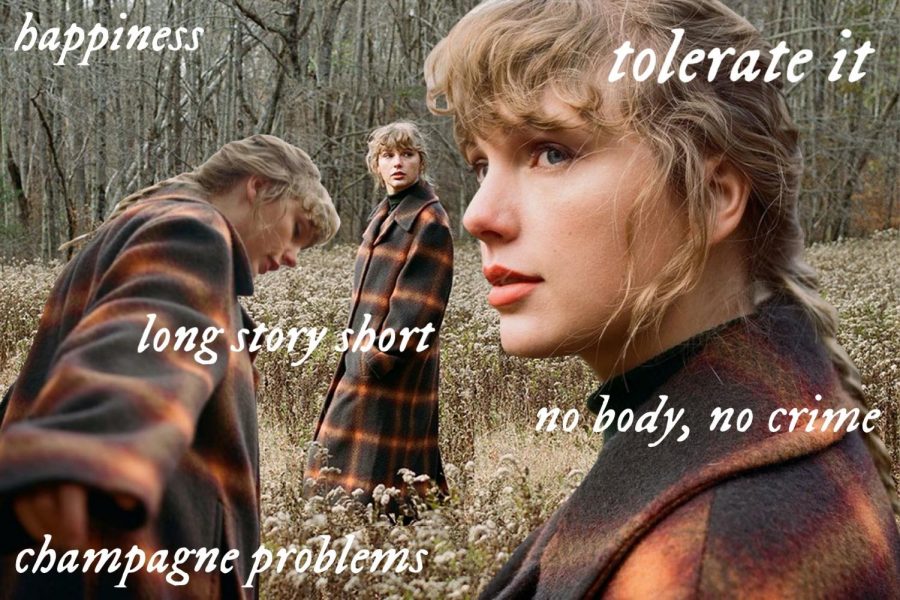 In her second surprise album of the year, Taylor Swift returns to her country roots. “evermore” has 15 tracks and comes after her 6 Grammy nominations for her last album, “folklore”.

“I love the album as a whole because it gives off such a peaceful and good vibe and I cannot stop listening to it,” says Jane Ruppel (‘22).

“Overall the songs were some of Taylor’s best,” says Eleanor Amoriello (‘22). “It was a nice throwback to Taylor’s country days especially after ‘betty’ from ‘folklore’.”

“I enjoyed ‘evermore’ overall but it wasn’t anything exciting for me,” says Claire Wong (‘22). “I honestly miss Taylor Swift’s past albums that were very upbeat and fun. It’s definitely calming to listen to, but I hope Taylor Swift produces more fun upbeat songs in the future also.”

“I was surprised she made another so quickly after ‘folklore’,” says Elise Favret (‘22).

Here are my top five songs from Swift’s album, “evermore”:

While the soft piano melody is beautiful to listen to, it’s the lyrics that really give “tolerate it” my top spot. The song describes how Swift praises a boyfriend and “use[s] my best colors for your portrait.” She feels unappreciated by him, singing that she “know[s] my love should be celebrated, but you tolerate it.”

The emotion that Swift delivers in her voice is what truly sets the song apart from the others on “evermore” or even “folklore”. In the bridge, she sings, “I made you my temple, my mural, my sky. Now I’m begging footnotes in the story of your life.” I really appreciate how she’s able to write and sing such a sad song while being in a new, healthy relationship with her current boyfriend, Joe Alwyn. Many artists only focus on one emotion in an album, and the way she’s able to sing and write about so many on “evermore” is what makes it one of her best.

“It was the first song I listened to on the album and instantly I loved it,” says Ruppel.

“happiness” was the first song I listened to on the album, and I instantly loved it. The lyrics come from a place of missing an ex. Swift sings, “There’ll be happiness after you. But there was happiness because of you.” Swift’s old romances have been nothing short of public, leaving many people to speculate she’s talking about one of her own exes. Still, the song is overall a beautiful one and I highly recommend it.

“’happiness’ can definitely remind someone of a previous heartbreak or break up,” says Wong. “The song did feel a bit long but most of the songs in the album are longer than usual.”

The sixth track on the album, “no body, no crime” tells the story of Swift suspecting her friend, Este’s, husband for her disappearance. Swift sings, “I think he did it, but I just can’t prove it”, that “his truck has got some brand new tires”, and “his mistress moved in”. Eventually, the song reveals that Swift kills Este’s husband and blames it on the mistress: “No body, no crime. I wasn’t letting up till the day he died.”

What’s interesting about the song is how Swift manages to keep a fast pace in the music but her voice remains steady and smooth. The lyrics are unbelievably creative and keep me listening to the song on repeat to find different hidden meanings every time.

“I’m 98% sure that Taylor and Harry Styles committed vehicular manslaughter because of this song,” says Favret. “There’s just so much evidence in their other songs as well.”

“long story short” makes this list not only for its quick tempo, one of the only songs on the album to do this, but also for its sweet lyrics. The song is about picking yourself up after a hard time and finding new love. Swift sings, “Long story short, it was the wrong guy. Now I’m all about you.”

Swift also says that she’s “dropped her sword” and “knocked on your door”. This indicates that she’s done with her past, very public, relationships and ready to settle down. This most likely refers to Alwyn as some fans even speculate the two have secretly tied the knot.

“’long story short’ is such a good song and it reminds me of something we would see on ‘Red’ or ‘1989’,” says Amoriello. “I really like this song because it’s kind of like redemption song and some of the conspiracy theories about who and what it’s about are super interesting.”

The second track on the album talks about two lovers, one who’s prepared to propose with a ring and the other who wants to break it off. “Champagne problems” means problems that only pertain to the rich and wealthy. Swift seems to mean that the problem of whether or not the narrator should have rejected her boyfriend’s proposal is minuscule in comparison to greater world dilemmas. The song is catchy with a slow tempo and melody.

“’CP’ is definitely one of Taylor’s best songs not only lyrically but in general,” says Amoriello. “She is so good at telling stories through her music that are relatable and make sense to any demographic of listeners.”