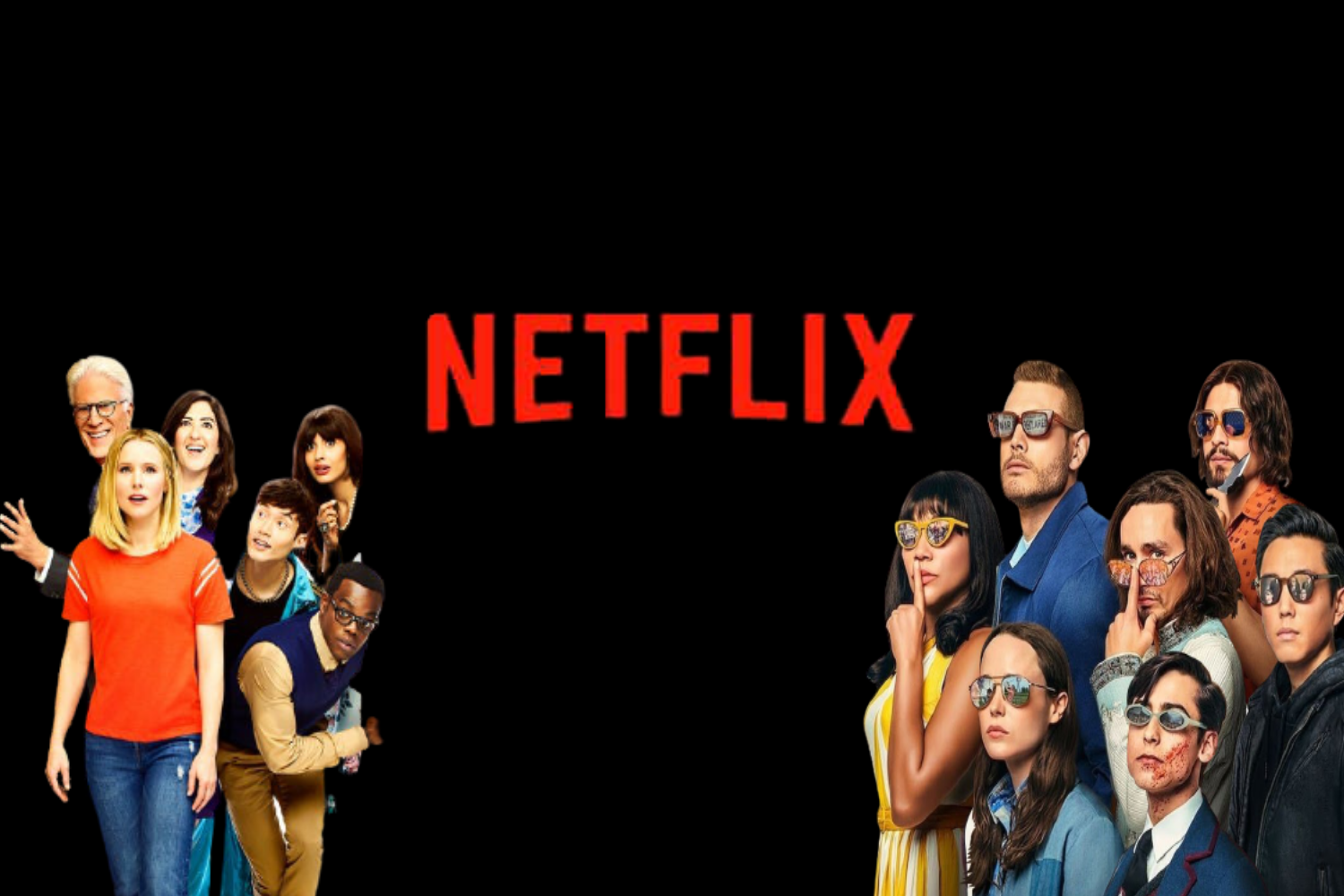 Christmas break allows students the opportunity to catch up on shows they have yet to watch. ((Photo Credit: Raquelle Elson/Piktochart/Achona Online))

Christmas break allows students the opportunity to catch up on shows they have yet to watch.

With the end of first semester, school work is officially out of sight and out of mind, meaning you should have plenty of time to relax. Being that you probably did not have the time to watch many TV shows or movies that were recommended to you, during your busy first semester  I would like to offer some recommendations to pass the time over winter break.

“The Good Place” is  a 2016 sitcom in which the four main characters die and discover the secrets of the afterlife. Starring Kristen Bell, Jameela Jamil, Ted Danson, Manny Jacinto, and William Jackson Harper, “The Good Place” is four seasons long, with a total of 53 episodes that are all about 22 minutes. As the quartet attempt to prove that they are redeemable, they uncover a bigger flaw in the system of the afterlife itself. One of the things that I like about this show is the way that it is about the afterlife, but manages to not align with any particular religion. I appreciate it because rather than only one group being represented, no particular religion is represented which allows all of the characters to have a variety of opinions on morality. On the topic of morality, this show introduces many different philosophical themes through teaching its own characters about moral correctness. Being that it is a sitcom, it is still a very funny show. This fantastic show ended earlier this year, so you can watch the show in its entirety on Netflix.

“The Good Place is definitely on my list of favorite shows. It’s made like a sitcom except the situational part of situational comedy is that they’re all dead. The plot is so intricately constructed, yet it’s unpredictable and so funny. I also really love how casually diverse it is. It’s the type of diversity we need more of. Half of the main characters are people of color and none of them are underused or stereotyped. In fact, they directly subvert stereotypes surrounding their races and are all essential to the story,” said Madison Kwo (‘23).

In this 2018 Netflix Original, debate team co-presidents, Lona Skinner and Bennett Russel, who can’t stand each other have to become a team in order to qualify for their debate competition. For them, qualifying is life or death because their acceptances to their dream colleges, Harvard and Yale, are depending on their success. The more time they spend together, the closer they get, adding the element of a love story. This movie contains all of the elements of a classic coming of age movie, but in a different setting which gives it a sense of familiarity. The themes throughout this movie keep you entertained, but this is also the kind of movie that you can just have in the background. This amazing movie is 1 hour 32 minutes long, making it a pretty easy watch.

hihi for all you hs seniors there’s a movie on netflix called candy jar and i highly recommend it bc it revolves around receiving college acceptances!! pls give it a watch it’s light hearted and funny and has a rly good message 🙂

“Perks of Being a Wallflower” is a 2012 movie based on a book by the same name. It can be found on Netflix, and with a running time of 1 hour 42 minutes, it is an easy watch. Charlie enters high school and, once he makes friends, has the stereotypical high school experience, starring school dances, parties, and other typical teenager activities . As the school year ends, Charlie has to deal with the fact that his only friends are seniors who will leave him at the end of the summer, amongst other things. Being that this movie came out in 2012, most people have already watched this movie, but if you have not this is your sign to do so. “Perks of Being a Wallflower” is set up like the average coming of age movie, but it is much more to it than that. There is not much I can say without spoiling it, but just know this is an incredible film. This movie has so many different subplots that are separate, but important to the plot which makes it the perfect movie to watch if you’re craving a deep, relatable movie.

Colleen Buckhorn (‘23) said, “I love ‘Perks of Being a Wallflower’ is definitely one of my favorite movies. It’s such a passionate movie and it’s just such an emotional rollercoaster. ”

Ellie Chu, a high school senior known for her great writing, is asked to help one of her classmates, Paul Munsky, write a letter to a girl he likes, Aster Flores. The deeper she gets into the situation, the harder it becomes for her to remember that Paul is dating Aster, not her. Similarly to “The Umbrella Academy,” this movie excels in every facet of cinema. This movie is aesthetically pleasing and incredibly well written. The opening scene of this movie explains what philosophers believe about love and finding your perfect half and is so indescribably beautiful. This movie handles  the situation of discovering one’s sexuality so seamlessly. This incredible 2020 Netflix Original is 1 hour 45 minutes long, and you will love every minute.

“The Umbrella Academy” is about 7 adopted siblings whose mysterious birth led to them getting powers. The death of their father brings them all back to their childhood home. Their sibling, Five, who they thought ran away when they were 13, returns to tell them they have to try to stop the end of the world. “The Umbrella Academy” is a dystopian TV show, which is my personal favorite genre. Since it deals with themes of time travel, it combats problems with the timeline in a way that does not exhaust or bore. While this show could be analyzed forever, but this show is also an enjoyable watch for the casual viewer. This 2018 Netflix Original has 2 seasons with 10 episodes in each season, and every episode is about 45 minutes each. If you enjoy this show, you will be excited to know that it was recently renewed for a 3rd season.

“I’m gonna be honest, I sat down and finished all of season one in a day. It’s one of those shows that keeps you on the edge of your seat at the end of each episode to the point where all you want to do is keep watching. There’s plenty of everything: Action, comedy, suspense, and more. I recommend this show to anyone who is looking for something that will keep you entertained for hours, and I especially recommend it to any fan of the Marvel or DC franchises,” said Riley Rubio (‘23).