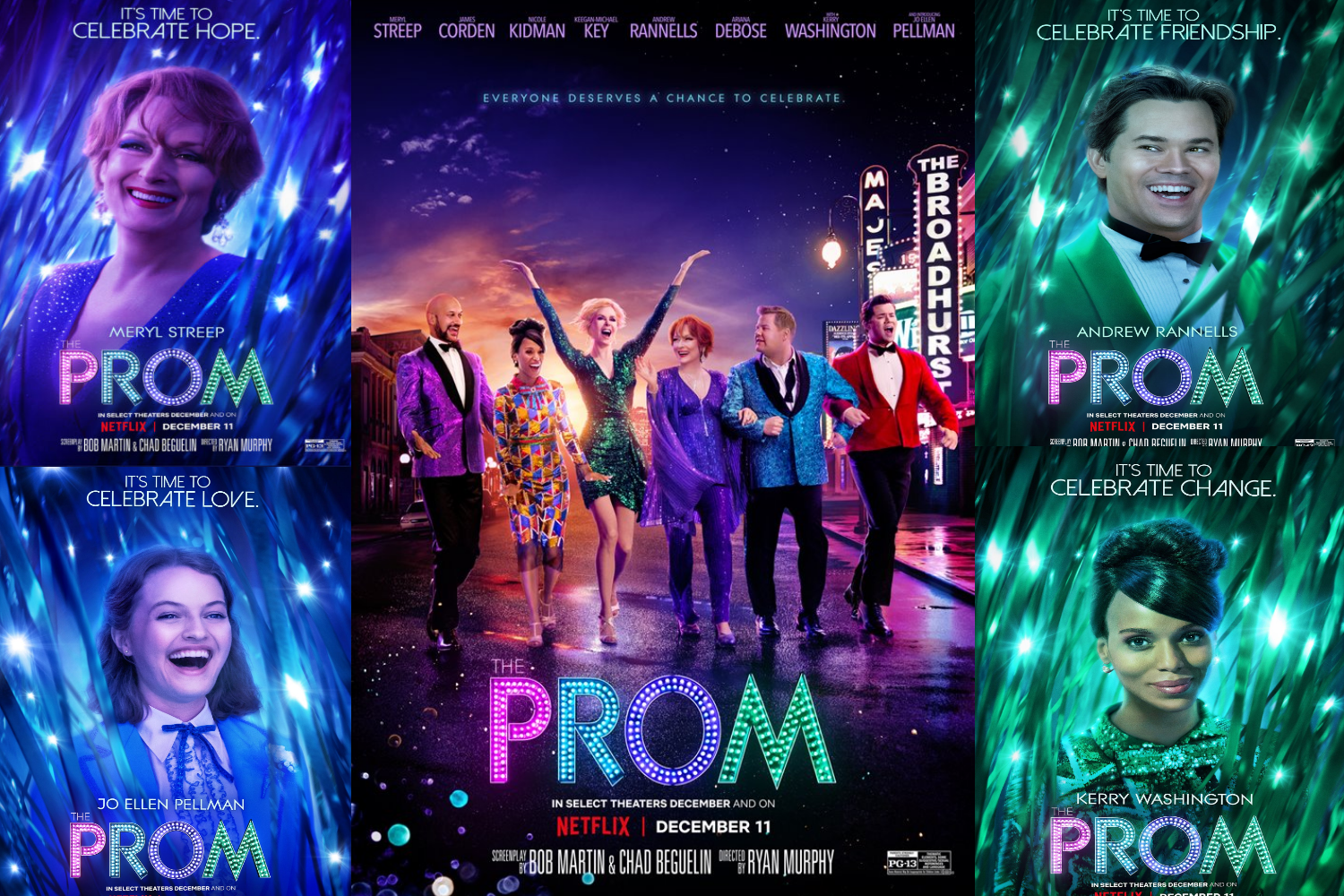 “The Prom” debuted at the box office prior to being released to Netflix subscribers, according to Town & Country. ((Photo Credit: Dramatic Forces/Storykey/Netflix/Ryan Murphy Productions))

“The Prom” debuted at the box office prior to being released to Netflix subscribers, according to Town & Country.

On Friday, Dec. 11, 2020, the Netflix film “The Prom” was released, which is an adaptation of the Broadway musical “The Prom” that debuted in 2018. The adaptation was directed by Ryan Murphy — also known for his works on “Glee” and “American Horror Story” — and included a star-studded cast with Meryl Streep as Dee Dee Allen, James Cordon as Barry Glickman, Nicole Kidman as Angie Dickinson, Kerry Washington as Mrs. Greene, Keegan-Michael Key as Principal Tom Hawkins, Andrew Rannells as Trent Oliver, and more.

Hannah Bruty (’21) said, “I’ve seen the trailer, so I’m excited to see the movie. I’d like to see the musical too because it seems really interesting.”

“The Prom” depicts the story of High-Schooler Emma Nolan (played by Jo Ellen Pellman). living in Edgewater, Indiana, who wants to bring her girlfriend to the school prom. However, outrage from the Parent Teacher Association causes the prom to be cancelled. Hence enters the Broadway stars Allen, Glickman, Dickinson, and Oliver who travel to Edgewater to improve their image by protesting against the PTA in support of LGBTQ rights.

With various musical numbers and laugh-worthy moments, Murphy delivers a story where a community learns to accept and “love thy neighbor,” and through Nolan’s story, Allen becomes a more empathetic and humble person as well.

If you need a lift (and frankly, who doesn’t?) I’d recommend watching The Prom on Netflix. We would have cried and applauded at the end if we’d been at the cinema. We did anyway and the cats looked a little shocked. #TheProm

When I think of Netflix’s “The Prom,” it reminds me of the film “La La Land” — starring Emma Stone and Ryan Gosling — as viewers get a glimpse of old Broadway at the beginning of the film; and the musical numbers performed by Streep and Rannells, especially, leave audiences mistaking a seat on their coach as one in a Broadway theater.

Similarly, in a scene between Hawkins and Dee Dee, Hawkins reveals he uses the theater as an escapism method from his life as a principal which links him with the audience. At that moment when watching “The Prom,” it captures the essence of the movie experience. It serves as an escape from our hectic lives, and viewers can replace mention of COVID-19 with the ballads of Streep where she impresses audiences with her seemingly ageless and “theater-like” voice that differs greatly from her singing in the “Mamma Mia” franchise.

However, it is important to mention that upon the film’s release, Cordon’s performance as the gay charachter Glickman has received backlash as he himself is straight. Many believe a gay actor should have been cast in order to open “doors for performers from marginalized groups in the entertainment industry,” as the Los Angeles Times describes. Critics also mention Cordon’s portrayal of the character augment the stereoetypes associated with the gay community.

“I do think James Cordon’s portrayal was negative. I think that the way he chose to play the gay character was stereotypical. It was bad,” said Lily Megerian (’21).

Yet, Cordon’s reenactment of the character in comparison to Brooks Ashmanskas (who played Glickman in the Broadway original cast) is similar, so it can be that he chose not to stray from the original character in order to pay homage to the original cast, as Julianne Bland (’21) describes who has also seen the musical.

She said, “To be completely honest, that is his job to portray people who he isn’t. He’s an actor, so I mean he is just doing his job — making money — so it’s not that huge a deal. [Also] I’ve seen the musical, and compared to it, he portrays the character pretty well. I don’t think it’s any different.”

Despite the criticisms, “The Prom” — although a fun, enjoyable watch — transcends this description to be a film of substance and meaning at its core.

At first narcissistic and selfish and one who carried her two Tony awards in her bag to show to others to get her way (like when she placed them on the desk of the hotel lobby in Edgewater), by the end of the film, Allen learns to be selfless and humble by witnessing Nolan’s hardships and helping create her own, inclusive, prom.

All I wanted was the same chance to enjoy my prom night like any other student.”

“The Prom” also serves as a reminder to audiences of the harsh reality that people of the LGBTQ community are still mistreated and worst of all not accepted by those in their communities and thus outcasted. Not shockingly, “The Prom” is “loosely based on a true story,” according to Time, about Senior Constance McMillen who was prohibited by her high school in Fulton, Mississippi, from going to the prom with her girlfriend in 2010; when the school board cancelled prom after the American Civil Liberties Union got involved, classmates blamed McMillen for the cancellation. Subsequently, the parents organized two events in which McMillen was invited to the “fake” prom of the two. The incident garnered national attention for McMillen who appeared on “The Ellen Degeneres Show,” for example. McMillen’s story is almost identical to that of Nolan’s in “The Prom,” which demonstrates that behind its musical and fantastical facade lies a harsh truth.

Similarly, the true stories of Lance Sanderson in 2015, Janizia and Raven in 2018, and countless more illustrate the discriminatory practices endured by this community regarding something as simple as attending a high school prom.

In addition, the song “Love Thy Neighbor” is both catchy and informative. It is sung by Oliver to some of Nolan’s classmates — of course, at a strip mall — which describes that it is not ok as Christians to pick and choose which parts of the Bible they do and do not follow, such as pre-marital sex and getting a tatto as Oliver cleveringly sings. However, above all, the practice of loving thy neighbor trumps them all as Religion Teacher Sister Mary Glavin states in the affirmative.

“One of the major commandments that God gave us is love your neighbor as yourself, so whether or not you agree with something that somebody is doing, you still have to love that person. Who are we to be judgers. We are not, so if we love each other as we’re supposed to, then it’s none of our business what choices they make; it’s God’s business,” said Glavin.

The ending few scenes that include Pellman’s rendition of “Unruly Heart” and the inclusive prom where people of all sexual orientations and genders come together to celebrate their identities in an accepting, loving environment is sure to be a tear-jerker because — love is love.