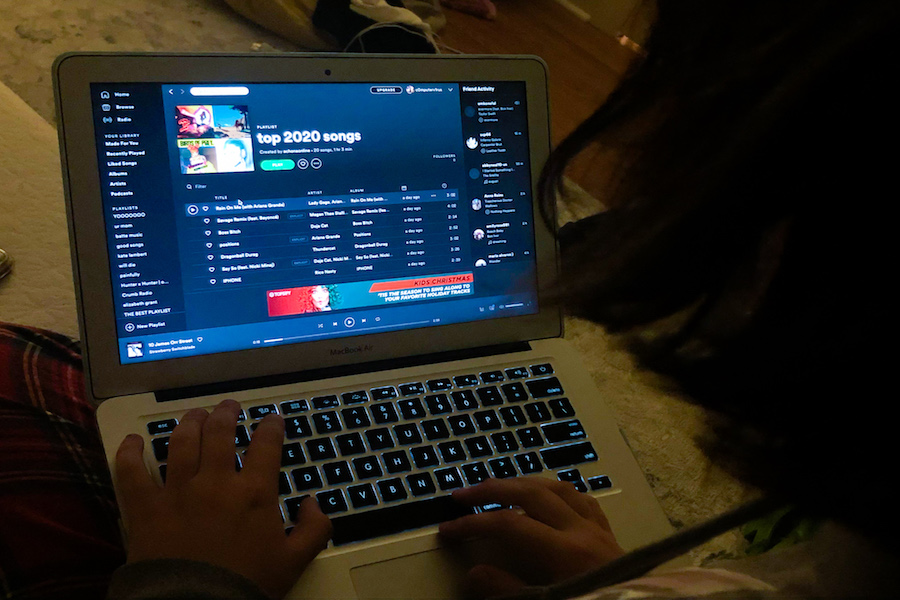 Catie Berg (’22) is pictured with our top 2020 songs playlist available on spotify!

2020 has been the most interesting year by far, and the songs released this year are no exception to that. Achona presents a list of this crazy year’s bangers and feel good classics, chosen based off of Pitchforks top 100.

The Weeknd outdoes himself again, releasing the megahit ‘Blinding Lights’ that soared to charts top 5 within weeks. This bop is filled to the brim with 80’s inspired synth pop that makes this tune so catchy and fun to listen to.

Even though he is most notable for his appearance in One Direction, Harry Styles has formed a new branded version of himself that gets everyone in their feels. ‘Adore You’ is an upbeat and memorable hit of 2020 that appeals to all music lovers.

While Pop Smoke is not with us through the rest of the year, his legacy is with us through his music and works. ‘For the Night’ is a slow but articulate R & B song that puts you in a chill but somber mood and atmosphere.

Kate Lambert (‘22) said, “I like Pop Smoke’s voice in general, it’s unique and very interesting. For the Night is such a catchy tune and I love to sing along. Blasting this song late at night is so ethereal because the vibe is unmatched.”

Another Pop Smoke classic, ‘What You Know Bout Love’ is a tame melody surrounding the question about romance. The song is casual yet sweet and a great tune to play when you need something to relax to.

Amanda Castillo (‘22) said, “I wasn’t really a big Pop Smoke fan and I’m still not, but this specific song and ‘What You Kno Bout Love’ are so good. I was kind of obsessed with it for a week or two.”

This indie and angsty bop written by Beabadoobee definitely deserves a spot on this list! Her song ‘Care’ covers topics about relationship struggles and self esteem as Bea pours her heart out at the mic. It’s a fantastic breakup song when you need to indulge in your emotions.

From memes to TikTok fame, ‘The Box’ by Roddy Ricch is a pumped up R & B hit that has such a feel good energy to it. The verses in the song flow surprisingly well with the odd ‘ee er’ beat, making the melody wrap together nicely as the song makes any listener feel lively.

The psychedelic pop band known as Tame Impala produced this great single that covers uncertainty and doubt that we all can attest to, but this doubt mainly comes from LA and the shady people there. The synths, vocal lines and pan flutes captivate the listener in Tame Impala’s world and form an ambience of hesitation.

Grimes’ ‘Delete Forever’ is a tame and relaxing track that gets its spot at #13. The song was released on her latest album, Miss Anthropocene, and then later released as a single. The melody and lyrical content of this bop are soothing and indie and deserving of more streams!

Blueberry Faygo is a rap R & B bop that primarily gained popularity through TikTok. The song even has a fanmade dance, popularized by Charlie D’Amelio and Addison Rae. The song is upbeat and playful, the energy of it is bouncy and fun.

Since its release, ‘Don’t Start Now’, has landed the top spot on the Official Trending Chart UK and has been successful since. ‘Don’t Start Now’ is a track that showcases the power in being single and embracing this new freedom. Dua Lipa doesn’t need to be locked to a partner, her carefree lyrics and vocals proves her self reliance.

Megan Thee Stallion has had a great year, dropping her EP Suga, and dominating the charts with her collaboration on Cardi B’s ‘WAP’. Captain Hook is a fast paced and aggressive rap hit that exudes confidence and empowerment.

Sophia Torres (‘22) said, “I would play Captain Hook in the car so much with my friends because the beat is so energizing and the lyrics make me laugh so hard that it gets everyone in a fun mood.”

Another Styles appearance on this list, Watermelon Sugar is a hit track on his 2019 album Fine Line. The song is a pop wonder, with Harry Styles’ amazing vocals and production value piecing together a fantastic pop song.

#8 Billie Eilish, ‘Therefore I Am”

Billie dropped her newest single on November 12th, ‘Therefore I Am’. immediately once released, the song has been a slap in the face towards her creepy fans. Billie is trying to say that only she can define her existence, I think therefore I am, and those who try to box her in have no idea what they’re speaking of.

Rico Nasty’s powerful vocals along with lyrical genius are one mixture to this bop, but combined with Dylan Brady’s production values ‘IPHONE’ ranks #7 on this list. The song is a hyperpop hit that deserves the attention and praise it got and definitely deserves more streams!

Say So has been a hit throughout 2019 and 2020, the pop rap hit helped further Doja’s career and audience. The song even has a cute but simple fanmade dance on TiTok, with Charlie D’Amelio and other large influencers dancing along to this great track. Doja captivated carefree and a bubbly personality into a song, it helps elevate any bad mood and can be admired by all music enthusiasts.

While Dragonball Durag is not the most popular track, it certainly needs more recognition. Thundercat does an amazing job captivating funk R & B perfectly. The storyline of this song is about Thundercat trying to get the girl of his dreams no matter what, even if his plans are a bit cartoonish. This song is definitely worth a listen and needs more praise than it got!

Ariana Grande released 6th studio album, Positions, on October 30th 2020 and her track ‘Positions’ takes the spotlight. Her song debuted at No. 1 on the top 100 billboard charts, and for good reason. Positions is a hit track that talks about romance and love that Ariana Grande will give unconditionally, even if she switches her mood or position quickly. She is fine with being a person of duality and trading places for those she loves.

Doja’s second appearance on this list, this time with her single Boss B*tch. This track is a pumped up party track that seeps power and has a great time. Doja plays with her words and those around her, she is here to get what she wants because she is a Boss B*tch.

Also a second appearance, Megan’s single mix, Savage featuring Beyonce, ranks high up because of how infamous this song has been through 2020. Megan isn’t tied down to anyone, she is a self assured and assertive woman who’ll do what needs to be done. She’s a savage, classy, bougie, ratchet.

At #1, Lady Gaga and Ariana Grande’s pop perfection ‘Rain on Me’ gets the title. The duo harmonize with such a perfect tone that is unkempt, Gaga’s theatrical mezzo flowing with Grande’s light soprano is unheard of. The song is a perfect match for this years current events, a song about enduring trauma and hard times with a smile on your face.