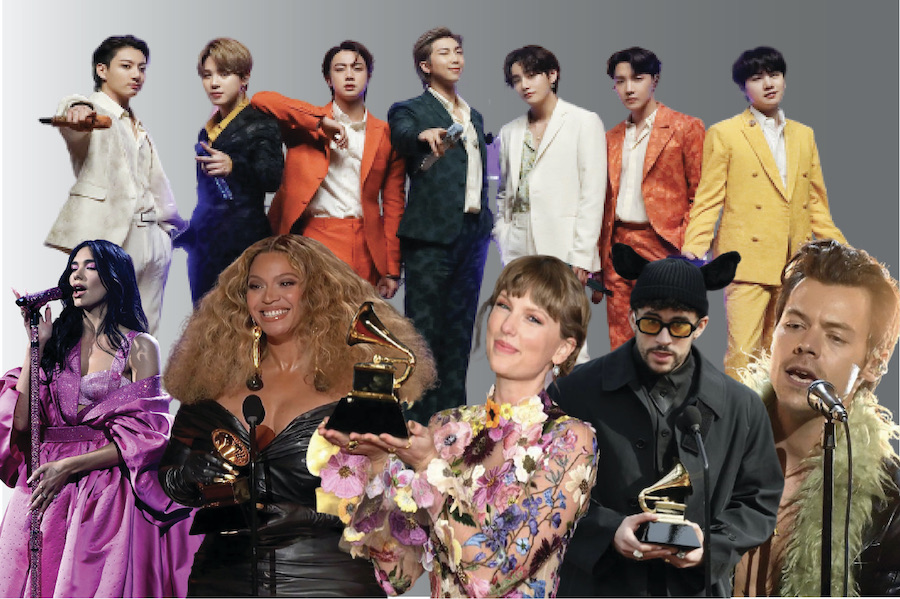 According to the Recording Academy, 12.6 million people watched the Grammy premiere ceremony.

On March 14, 2021, the 63rd annual Grammy Award Ceremony was live-streamed on CBS. Due to the pandemic, the show had no live audience this year and was moved to a smaller location. It was hosted by comedian Trevor Noah and had performances from artists such as Taylor Swift, Harry Styles, Billie Eilish, BTS, Dua Lipa, and more.

There were many incredible moments and wins for various artists. Beyoncé won her 28th Grammy, which is the most Grammy wins for a female in history. Taylor Swift received a Grammy for Album of the Year for the third time in her career, while Harry Styles received his first Grammy in his solo career.

“I really liked Harry Styles’s performance, and I thought it was pretty cool that Taylor Swift won her third Album of the Year Grammy,” said Julia Artz (’24).

Korean award shows putting BTS performances at the last part is different from American shows doing it. Korean shows do it because they KNOW that BTS are the most relevant performers and they treat the boys like royalty, but in American shows it's for nothing but clout-chasing.

Through all these good things, controversy began months ago when The Weeknd did not receive a nomination for his record-breaking album, “After Hours.” Additionally, to the surprise of many, BTS did not win a Grammy for Best Pop Duo/Group Performance. With the lack of nominations and wins for popular artists, people are beginning to question the validity of the Grammys and whether a Grammy actually means success in an artists’ career.

Despite popular belief, Grammys are not awarded based on sales or views. More than 13 thousand Recording Academy members who are creators and professionals peer recognize the Grammy Awards. In 2020, 2,300 new voting and non-voting members were invited to the Academy, with 48% female and 48% male, and 37% people of color. To be a voting member, they must have creative or technical credits. Submissions are verified for eligibility and placed in the correct categories by genre-based selection committees. Members can only vote in their area of expertise, in 15 categories in their genre plus the General Fields (Record Of The Year, Album Of The Year, Song Of The Year, and Best New Artist). The accounting firm Deloitte counts the votes and sends the results to the Recording Academy’s nomination review committees. From there, they decide the final nominations. The next round of ballots for Recording Academy members are cast, and Deloitte tabulates the votes. The results are then revealed and announced on Grammy night.

With BTS not winning a Grammy, the hashtag “#scammys” began to trend on Twitter. It was also noted that BTS was one of the last performances of the night. People claim that the Grammys put them last to increase their viewer count. Many people called attention to POC having to work harder to receive the same recognition as others.

Many Latin artists have also been “snubbed” like BTS. Latin artists are only nominated for Latin categories in the “normal” Grammys instead of being considered for all categories. Though there is a separate Latin Grammys, it does not receive as much attention. This inspires the question of whether the two Grammys should be joined.

it’s true!! the latin grammys have been a thing for years now and it’s the only way latinx artists can get what they deserve #GrammysSoMessy

The Latin Grammys was created to highlight the achievements of people involved in the “Latin” music industry. To begin, the term “Latin” makes the music at the awards ceremony seem foreign. This also gives this music the sense that it is not normal since it is separate. The term is usually used to describe people and music from Latin American countries, but in the context of the Grammys, it is used for any song in Spanish or Portuguese. Since so many Hispanic artists are finding the same success as other artists, they should no longer be treated as a different industry.

If the Latin Grammys continue to exist, more inclusive categories and terminology should be implemented. As Lucas Villa says,” ‘Music’s Biggest Night’ surely has room to fully honor the diversity of Latin music in the mix.” POC artists are constantly overshadowed in the industry instead of being recognized for their talent.

On Twitter, five days before the Grammys, Zayn Malik said, “F–k the grammys and everyone associated. Unless you shake hands and send gifts, there’s no nomination considerations. Next year I’ll send you a basket of confectionary.” Zayn later clarified that his tweet was not in reference to his work but rather a criticism of how the Grammys nominations and voting process are rooted in racism.

My tweet was not personal or about eligibility but was about the need for inclusion and the lack of transparency of the nomination process and the space that creates and allows favoritism, racism, and netwokring politics to influence the voting process

Many different artists, known as icons in the music industry, have never won a Grammy or received few nominations. Here is a list of a few of these artists:

Not only is there controversy with nominations and winners, but also with presenters. Comedian Bill Burr is receiving criticism for the jokes that he made while presenting awards. When he first walked on stage to a classical piece of music being played, he said, “Was I the only one who wanted to kill himself during that piano solo?” This blunt comment can be very damaging to those struggling with mental health issues and suicidal thoughts.

His comments throughout the night continued to offend viewers and showed disrespect towards the winners. When presenting the Best Regional Mexican Music Album (including Tejano) award, he completely mispronounced the winner, Natalia Lafourcade’s name. Burr said, “I can’t say this name. Natalie what?” and then mispronounced her last name.

“I do not think the situation [announcing Latin artist winners] was handled well. Bill Burr’s main job was to announce these names, and seeing how he may not have been familiar with all of the names, he should have put more time into researching the nominees’ name pronunciation so that when the time came, no matter the results, he would be able to respectfully deliver the award that the artist worked long hours to earn. I can only imagine how Natalia Lafourcade felt when she spent so much time, energy, and effort into her singing career to have someone joke about her last name,” said Josie Chapuis (’24).

Though he said, “If I butchered her name, I’m sorry,” he had the opportunity to learn how to pronounce her name before the award show. Receiving a Grammy is seen as a high honor in the music industry, and it is disrespectful to mispronounce one of the winner’s names. Pronunciation is easy to learn with practice and effort, something Burr did not demonstrate.

butchering ethnic names is not funny.

“I believe the Grammys was pretty good this year based on the circumstances, but there is always a need for more representation, diversity, and inclusiveness when it comes to these award shows,” said Artz.

Though the award ceremony had many problems with cultural diversity, there were many triumphs. Many women were awarded for their hard work and broke records. As the world slowly progresses, we can hope for positive change in media and the opportunity for more diversity in future shows. As Zayn Malik said, “[the Recording Academy is] moving in inches and we need to move in miles . . . We need to make sure we are honoring and celebrating ‘creative excellence’ of all.”