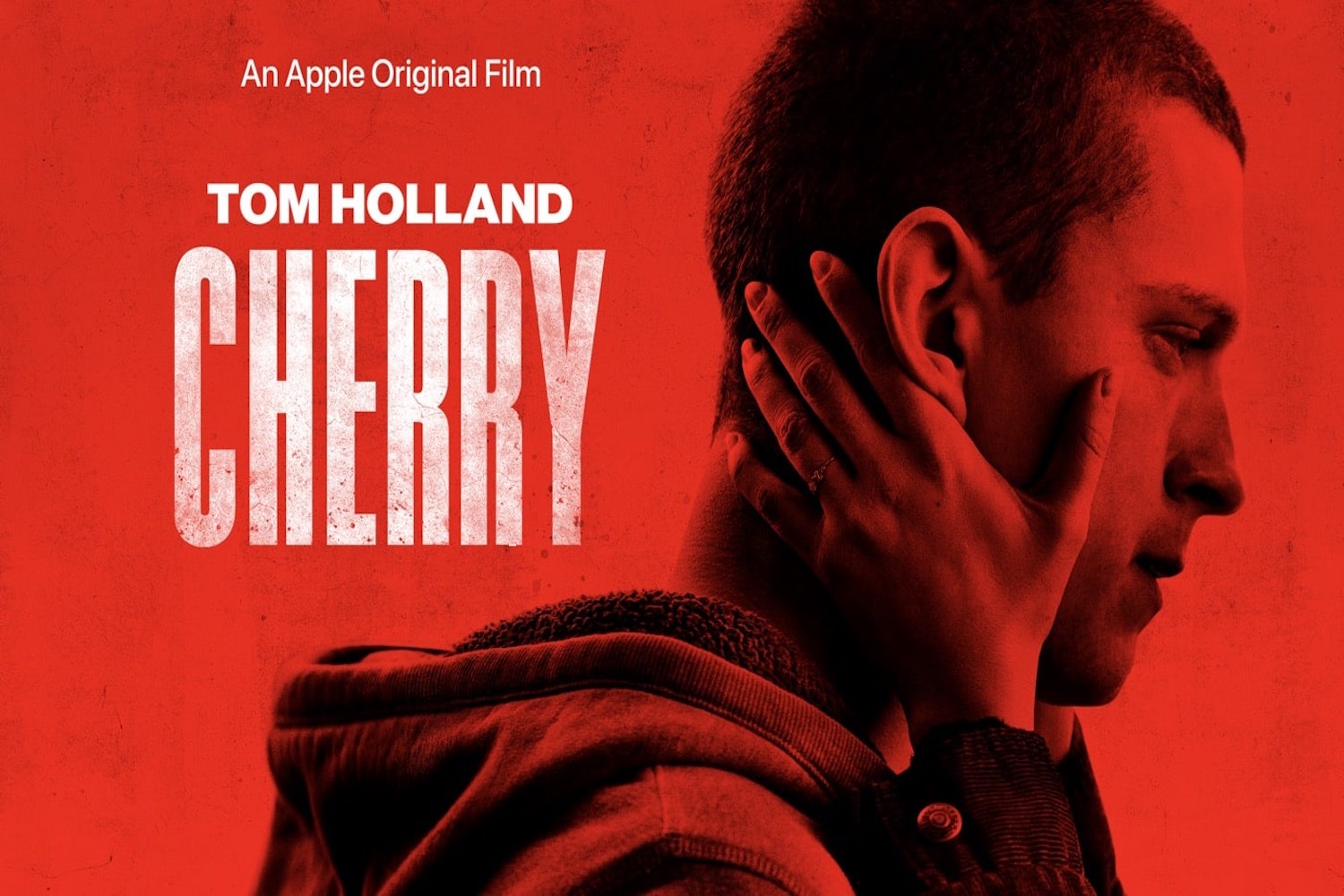 Actor Tom Holland is able to break out of the superhero meld even further in “Cherry” where he stars as a drug-addicted war hero suffering from Post-Traumatic stress disorder (PTSD). ((Photo Credit: The Hideaway Entertainment/AGBO/Kasbah Films))

Actor Tom Holland is able to break out of the superhero meld even further in “Cherry” where he stars as a drug-addicted war hero suffering from Post-Traumatic stress disorder (PTSD).

On Friday, Mar. 12, “Cherry” was released on Apple TV+ after its first release in theaters on Feb. 26 — starring Marvel’s Spiderman Tom Holland and directed by Anthony and Joe Russo.

Alissa Pradera (’21) — who has yet to see the movie, but saw the trailer — said, “It’s so weird to see Tom Holland in this movie. I am getting the feeling it is about a war veteran who has PTSD and gets involved with drug abuse. It just seems a little hectic and crazy from the trailer, but I want to watch it. I’m intrigued by it.”

Based on the best-selling novel also named “Cherry,” by Nico Walker, Cherry (Holland) — drops out of college and enlists in the Army to be a medic after his girlfriend Emily (Ciara Bravo) temporarily dumps him. Yet, the love story between Cherry and Emily follows a tumultuous storyline as Cherry returns home from Iraq — although decorated with medals as a war hero — with PTSD, caused by his service in combat zones where he saw his friends die in a car bomb. However, rather than treat his PTSD with therapy, Cherry is prescribed OxyContin — classified as an “opioid analgesics,” which changes how the “body feels and responds to pain.” From then on, Cherry falls into drug addiction, combined with alcohol abuse, but also causes Emily to fall prey to the same addictions as well. In debt, as a result of spending all their money towards buying drugs, Cherry then has to resort to robbing banks in Ohio.

Tampa Catholic Freshman Daniela Nieves said, “Overall, I loved the film as a whole. The chemistry between Tom and Ciara was absolutely immaculate and amazing, and the acting from everyone was incredible.”

Despite “Cherry,” being first a novel and then a film, its plot is not as fictitious as viewers may assume it to be as Walker wrote it while serving his own 11-year sentence in a Kentucky federal prison (he pleaded guilty in 2012) after robbing banks near Cleveland in a span of four months. And like Cherry, Walker also served in Iraq between 2005 to 2006, where he earned “seven medals and citations” due to serving in over 200 combat missions. However, Walker returned with “survivor’s guilt” and what his parents described to be a “different person,” and he thus began taking OxyContin and heroin. Walker is now out of prison, after being released early “on compassionate release” in order to take care of his mother before she died of leukemia and is almost done with his second novel, which is a third-person narrative of his time in prison.

Some of it’s kind of ugly, but I didn’t really have a choice in the material. I didn’t want to romanticize it or exaggerate to make it more entertaining, I wanted to show it for what it really was.”

And the film “Cherry” serves as a continuation of the legacy Walker has laid as it further illustrates themes of violence, addiction, healing, and the human condition through a story that never goes out of style, but will always be prevalent so long as there is war and soldiers fighting in them.

Despite it receiving a 38% on the tomatometer on Rotten Tomatoes (although it received a 76% audience score) and its flaws — such as some scenes being awkward, unnecessary, or simply weirdly shot — “Cherry” achieved what I perceive to be at the heart of what it set out to do: it gives viewers the full picture, not romanticized, but just real.

Cherry’s time during basic training, before going to Iraq, is by far the most absurd and complex, which is also demonstrated by the use of a different lens and coloring, in addition to the scenes themselves. For example, the toxicity found within the U.S. military in the form of drill sergeants are seen throughout basic training by the constant yelling and berating of trainees, which leads one man to attempt suicide, although unsuccessful.

Moreover, while standing in the cold, Cherry is instructed to stand in front of about 100 soldiers and do a robot dance as they state a medic chant. To put it plainly, this scene causes uncomfortable and weird feelings to forge within viewers as it becomes evident that these men and women are trained to be machines, not solely people with enhanced military capabilities — like robots who are supposed to be unfazed by the traumas of war.

“I feel like Cherry definitely de-glorified war because it really showed what war can do to people,” said Nieves.

However, these efforts are in vain as Cherry does undergo feelings of loss, fearfulness, and isolation in Iraq, which not only contradict his training, but also de-glorifies war and brings humanity to it. Unlike the Russo brother’s other directed films, such as “Avengers: Endgame,” that make conflict and battles exciting and exhilarating — by extrapolating the severe effects war can have on people — “Cherry” does the opposite. It puts war and soldiers in a real light, not in a fantastical and romanticized context.

“Cherry” also manages to remind viewers that although trained to be a killer in combat, Cherry is not trained on how to assimilate back into society and properly manage his PTSD.

“Factors that predict” a “hard re-entry into civilian life,” as found by Pew Research Center, include: the experience of a traumatic event, serious injury, being a post-9/11 veteran, serving in combat, and knowing someone who was injured and/or killed — all of which are experienced by Cherry.

And as a result of suffering from PTSD and the difficulties of re-entering civilian life, opioids are often prescribed to veterans. For example, one in four “soldiers are given an opioid prescription in a given year . . . opioid use is commonly associated with PTSD . . . [and] PTSD patients are most likely to mix opiods with other substances.”

Bella Otte (‘24) said, “I really liked how Cherry portrayed a lot of the drug abuse and unfair treatment that veterans go through while also avoiding romanticizing it and making drugs look appealing to young audiences. There are a lot of movies that end up making drugs look like they have more benefits than costs, and this movie really showed the truth: there is no benefit to drugs that is worth the impact it has on your life.”

“Cherry” not only demonstrates how a war hero can become an opioid abuser, but also the realities of addiction. Where other films glorify drug and substance abuse by only showing certain aspects of using drugs, typically the highs — like the films “Pineapple Express,” “Blow,” “Neighbors,” and “Superbad” — “Cherry” illustrates the full picture: the highs and the lows.

It demonstrates that Cherry and Emily are able to momentarily escape their pain with pills, but that is followed by sickness and the ruin of their lives as it interferes with Emily’s job at school, for example. She even fakes going to the restroom in order to then meet Cherry in the parking lot to receive another injection because they are always left wanting more.

After being forced to undergo withdrawal symptoms because of their lack of funds, “Cherry” shows the coughing of blood and constant diarrhea which Hollywood often casts a shadow over. The pain from these symptoms, however, is too much to bear, so Cherry begins robbing banks in order to be able to afford more drugs.

Although the majority of the film details the sufferings and pitfalls undergone by Cherry and Emily, Cherry’s time in prison is a time of healing and recovery. After withdrawal, he begins attending therapy and putting his energy towards exercising, learning, and writing.

His story shows that individuals can make it to the other side, and for Walker and Cherry that bridge — surprisingly — was prison. However, many people lack a path to healing, and someone should not have to battle addiction and loss to achieve it, which only further motivates viewers to build a bridge for those who lack one.