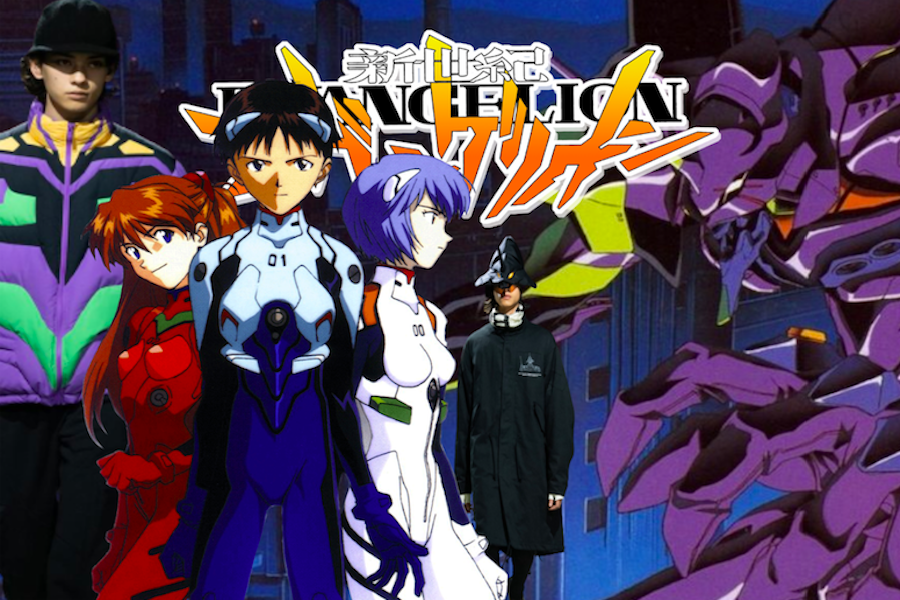 Neon Genesis Evangelion remains one of the most influential animes to exist. The show continues to inspire millions, including the fashion industry, since its release in the 90’s. ((Photo Credit: Sophia Garcia/Achona Online/Piktochart))

Neon Genesis Evangelion remains one of the most influential animes to exist. The show continues to inspire millions, including the fashion industry, since its release in the 90’s.

From elite fashion shows to excessive merchandise, Neon Genesis Evangelion has been an enormous influence on Japanese culture and the anime industry in general. The new Undercover x Neon Genesis Evangelion collaboration is one of the few incorporations of NGE into pop culture. Since it’s initial release in 1995, the show has not lost popularity or conversation, and continues to test what anime can be. NGE is deemed noteworthy because of its complex themes of escapism, religion, depression and philosophy that make the viewer question their own merit.

Neon Genesis Evangelion starts with Shinji Ikari, a 14 year old boy who is contacted by his estranged father to pilot large robots for his secret intergovernmental agency. The robots are called Evangelions and serve to combat the Angels, equally large aliens who are driven to destroy the human race, because the Evangelions are the only forces that are capable of defeating them. Shinji Ikari faces a recurring dilemma, he doesn’t want to pilot the Eva but he must to save humanity. This premise may sound bizarre or boring, but the show has a very complex plot that intertwines all the characters and makes commentary on the dangers of escapism. Shinji knows he is the only one up for this task, but it’s exhausting and difficult to have the world on your left shoulder and your normal teenage problems on the right. His cold father does not ease this tension, because it is clear his father doesn’t care for shinji as a person but only cares about his usefulness. He feels alone and incompetent, the only person he knows he needs to rely on is himself but he doesn’t have the time to understand or to love himself.

Sophia Torres (‘22) says, “The show definitely caters to the artsy type, but overall it is a very well throughout series. I shied away at first because the plot of robotic titans fighting aliens is not as entertaining as I expected it to be, but I agree with the fans in regards to how personal the show is”. Evangelion is definitely a show for people who love emotional intimacy, psychology and philosophy. Torres continues by saying, “I really admire how Hideaki Anno created a new world and extremely original storyline that mixed real and relatable emotions with such a heavy and bizarre plot.”

Neon Genesis Evangelion has a deep plotline that occurs in the show but does not seem to ever be bluntly explained, which is why a lot of the fans don’t understand what is happening towards the end. To explain this further, before the show’s storyline begins it should be noted that souls and bodies are independent from one another. A soul can make its own body from special substances or inhabit a vessel. Thousands of years ago, there was an alien race that was barely able to survive so they detached from their souls, placed them in ships, and created beings who would populate beings with these vessels they can reincarnate from. These beings are called the “Seeds of Life”. Two of the ships arrive with the beings, the first seed Adam and the second seed Lilith. Each ship has a self defense weapon which is referred to as “Lance of Longinus” by humans. It is a rule that both Adam and Lilith cannot coexist, so on the first impact Lilith is assumed to have been damaged and the LoL automatically incapacitates Adam. Lilith creates life after, but when Adam was discovered the second impact happened.

Aside from Shinji, three other pilots help to aid Gendo and his mission: Rei Ayanami and Asuka Langley Soryu. Rei’s character is cold, distant and mysterious, her actions seem robotic and each one she makes is ordered by anyone but herself. Her relationship with Gendo Ikari seems to be holding something more than the viewer/Shinji realizes. Rei is guarded, quiet and does not seem to be interested in socializing or preteen activities. She always perfectly sync’s with her EVA unit and barely makes mistakes, seeming unhumaningly useful which never reflects well on Shinji. Her presence also intimidates Asuka Langley Soryu, the other 14 year old EVA pilot. Asuka is a hotheaded, bold and domineering pilot who appears to be the opposite of Shinji’s personality. She never tries to let her guard down, she always needs to seem and be perfect, she always needs to be on top, she needs to be the best. Asuka is more outgoing and social than both Shinji and Rei, but her overconfidence damages her piloting abilities because her standards are too high. She has trouble syncing with her EVA because she doesn’t know how to be vulnerable and show weakness. While Asuka is written to be antagonistic and hateful towards Shinji because of his cowardliness, Asuka only hates Shinji because she hates the weakness she shares with him. Asuka sees the potential and power Shinji can manage, but she hates him for being as damaged and scared as she truly is.

Without any spoilers, Neon Genesis Evangelion remains so polarizing because of the philosophy of what it means to be human that the show continues to question. NGE entails and explores each of the characters that deal with past trauma, adulthood, death, rebirth and eternity. The viewer explores every important figure in Shinji’s life and metaphorically puts them under a microscope and analyzes their flaws. Most significantly, creator Hideaki Anno has frequently spoken about having a mental and artistic breakdown while creating Evangelion and formulating his anxiety into the story. Evangelion plays as a metaphor for Anno’s artistic creation, depression, and speculation of life itself. This can be seen most prominently during the last two episodes of Neon Genesis Evangelion, which change the script and spend 20+ minutes exploring what it means to be alive.

Catie Berg (‘22) says, “I have seen Evangelion around on the internet for a while and I’ve been meaning to finish it. Personally, I don’t really like action packed shows or animes because it can be boring, but I’ve heard too much about NGE to pass it up. Shinji sort of irritates me currently, but my friends say I may like him later in the show but I’ll have to see.”

Neon Genesis Evangelion is remarkably one of the most well known animes in Japan and one of the first animes to be as popular as it is with such a dark and depressing output on life. NGE has directly spawned great animes like Serial Experiments Lain and Revolutionary Girl Utena, as well as been referenced in western shows like My Little Pony: Friendship is Magic, Regular Show, Gravity Falls and Steven Universe. NGE deconstructed and made mecha (robot) anime more multidimensional, by breaking the hotheaded confident protagonist trope and introducing a meek, cowardly protagonist instead. Neon Genesis Evangelion has shifted how mainstream animes can be written and continues to inspire millions of viewers who watch the series. Some great animes to get into if you liked NGE include: FLCL, Serial Experiments Lain, Puella Magica Madoka, and Haibane Renmei.