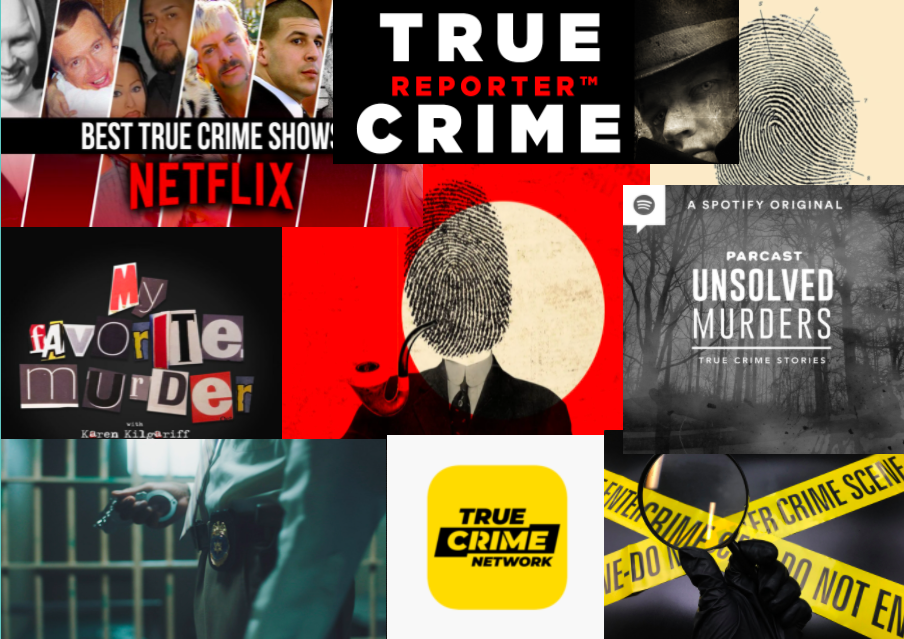 Mikayla Croissant (’22) says, “I discovered true crime in middle school and I’ve loved it ever since. As a pretty sheltered middle schooler, watching true crime media gave me a way to see real things happening in the world. I also love the thrill of it.” (Photo Credit: Nicole Sakre/ Piktochart/ Achona )

Mikayla Croissant (’22) says, “I discovered true crime in middle school and I’ve loved it ever since. As a pretty sheltered middle schooler, watching true crime media gave me a way to see real things happening in the world. I also love the thrill of it.”

Starting in the late 2010’s, an internet phenomenon called the ‘true crime boom’ began and has continued dominating the media ever since. With this true crime fascination running rampant through the Internet, its exploitative behavior have caused many to rethink the genre entirely and further consider the harm that it contributes to society.

The glorification of serial killers has been around for decades, seen constantly in the media through podcasts, tv shows, news articles, movies, and more. Although there is psychological evidence that true crime is addictive and a way to receive a quick adrenaline rush, there has been more talk recently about the moral dilemma of exploiting these stories and the ethics behind making yet another movie about Ted Bundy. As true crime becomes increasingly popular, it has been criticized for taking it too far and not knowing where to draw the line.

With more than 50 true crime documentaries under their belt, Netflix has been condemned for the way some of their movies have been executed, such as the ones made about Ted Bundy and Jeffery Dahmer. The making of these movies, Extremely Wicked, Shockingly Evil, and Vile in particular, have caught critics’ attention, who denounce the film as too surface level. True crime differs from other genres of media, due to the fact that great care must be taken in order to fully capture the evils of serial killers such as Ted Bundy. It is seen as quite a serious matter, as these were real events that impacted the lives of many in an awful way and should be treated accordingly.

Ava Politz (’23) says, “I don’t like true crime, it’s so scary to me. I dislike it because it’s events that actually happen in real life and I feel like it would just make me paranoid.”

These documentaries have also been criticized for its casting and the way the criminals are depicted. For the Netflix documentaries Extremely Wicked, Shockingly Evil, and Vile, and My Friend Dahmer, the ever-popular actors Zac Efron and Ross Lynch were chosen to play these serial killers. Concerns arose, with people wondering why such well-known and very conventionally attractive men were picked to represent Ted Bundy and Jeffery Dahmer, many believing that they were being far too glorified.

It was as if Netflix wanted women everywhere to be ‘obsessed’ with their beautified version of Bundy and Dahmer, rather than being focused on the actual crimes and the atrocities that these men carried out. Women across the country watched these films, completely throwing their moral compasses to the side as they found themselves completely enthralled with these deadly and disturbed men. Especially with Netflix’s audience being predominantly young and impressionable, it seems very off-color to romanticize these violent men and undercut their actions by drawing the conclusion that they were merely ‘misunderstood.’

The exploitation of victims and their families remains a significant problem in true crime media as well. Behind every crime is a family who has suffered at the hands of violent murderers, and many do not wish to share their story. With big-name film studios constantly crafting new true crime stories, pressing victims’ families for more information often just reopens old wounds and brings forth a question of ethics.

Considering the issues that true crime brings forth, it cannot be denied that the modern depiction of what crime should look like in the media is severely warped. With this being said, many filmmaking companies have begun exploring ways to better the ethical aspects of documenting true crime, such as focusing solely on the criminal and keeping the exploitation of victim’s families and other outside sources to a minimum. However companies choose to restructure the way true crime documentaries look, it is evident that change must be made to reduce further harm within this industry.