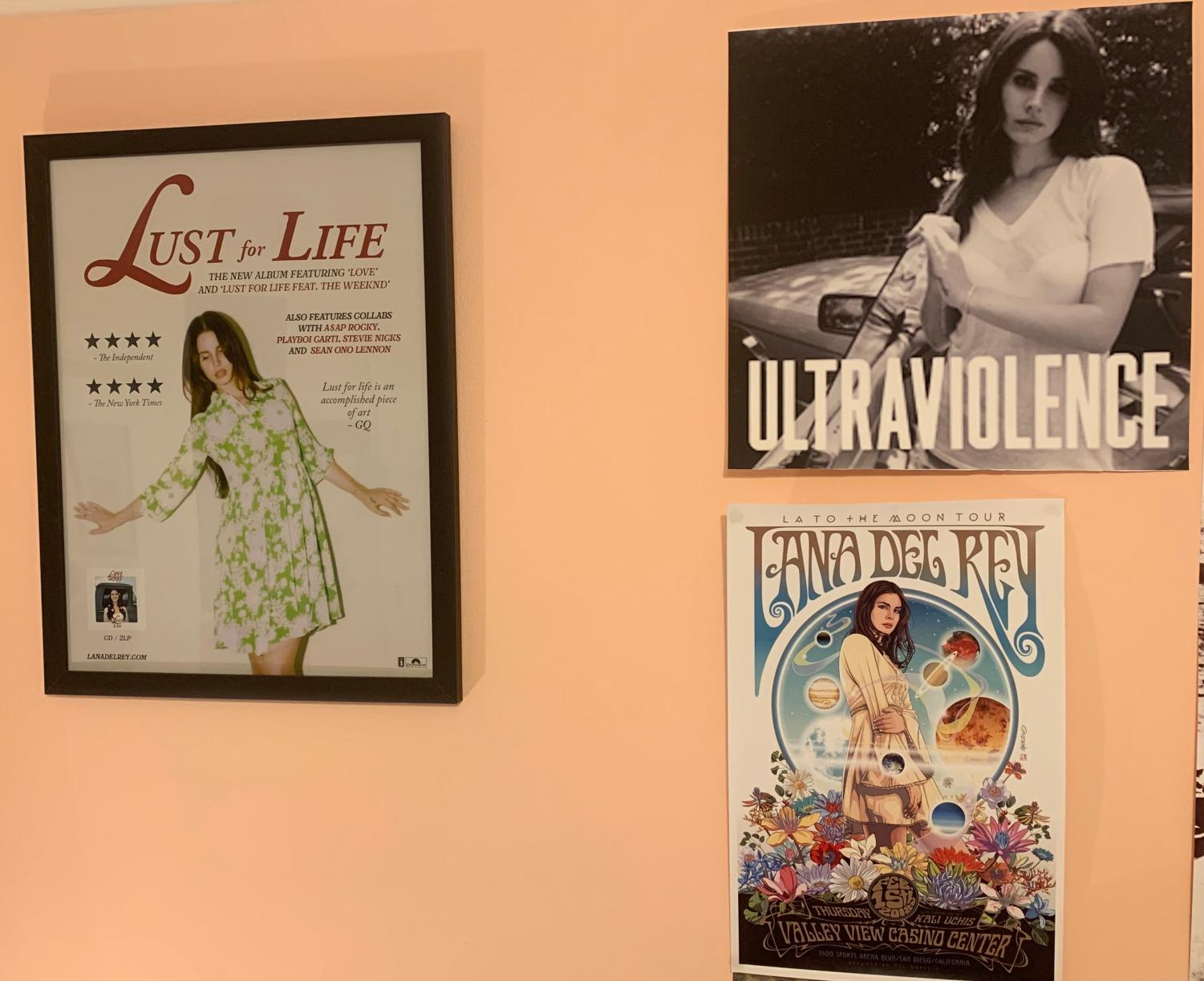 Throughout the 2010s, Lana Del Rey has released seven albums which have all been hits, largely due to each of their unique styles.. In the early 2010s, she was known as just a young pop star but as she matured, she became one of the most well known indie pop singers on the scene. Her albums tend to follow a specific theme and storyline that depicts her life starting in adolescence to adulthood.  Del Rey’s music is unique as it tells a story and this plot keeps listeners intrigued for future albums.

Del Rey’s first album release was Born to Die (2012). This album exhibits ideas of lusting after older men, drug addiction, and sadness from Del Rey’s days before and in boarding school. She was a heavy drinker at the age of fourteen and was sent to boarding school to get sober, which is where her plot line begins with Born to Die.  She describes her days in boarding school as depressing and mischievous as her friends were into hard drugs and older men and she was often brought into that. In this album, she even titled a song after Lolita, the classic novel by Vladimir Nobakov, implying that she and her friends romanticized the life of being abused by older men.

The second album released by Lana Del Rey was Paradise (2012). Paradise and Born to Die were joint albums as they were even later combined  in the same year to form Born to Die-The Paradise Edition. Although the two albums are very similar and they were combined, she created a short film and a monologue to go along with the album. These cinematic pieces gave audiences a visual representation of the plot of her life and allowed them to understand the story of her albums more clearly.

Ultraviolence, Del Rey’s third album, was released in 2014. This album had a profound impact on young people as this was the time when Tumblr was popular. Young people at this time loved the aesthetic of Del Rey’s Ultraviolence. This album came with a darker aesthetic as it is about being in abusive relationships. Stemming from her previous infatuations with older men, Del Rey describes her  abusive relationships after her boarding school days and the stories of them in her album Ultraviolence.

This album was the most controversial out of all of them due to the supposed glamorization of abuse. Many girls began to think that abuse was acceptable if someone they looked up to (Lana Del Rey) was romanticizing it. However, as teens grew out of their Tumblr phases and began to understand that abusive relationships are not healthy, fans began to be able to appreciate the art as it was meant to be perceived, as a story rather than a glamorization of abuse.

Ava Cabrera (’24) says, “I was really young and impressionable when this album came out but I was also too young to understand the meaning of it. This was probably a good thing because I could have gotten caught up in the meaning. I am glad that I was able to just appreciate the music.”

Del Rey’s fourth album released was Honeymoon (2015). This album came with a lavish and Southern European aesthetic. This album is unique from the rest of hers because instead of creating a blatantly depressing album, this album seems to highlight the highs of her abusive relationship, almost glamorizing them. This album is unpopular amongst some fans because it is the slowest out of all of them, but in many fans’ opinions it is extremely underrated.\

Senior Amanda Castillo says, “I love Honeymoon so much. It is definitely one of my favorite Lana albums even though it is so underrated. I like how in some of the songs they are even in  Italian. It really changes up Lana’s vibe.”

Lana Del Rey’s most streamed albums in 2021 so far:

In 2017, Lust for Life was released. This album completely stands out from the rest of her albums as it has a theme of breaking free of all of the negativity and abuse in her life. Although some of the tracks on the album are still touching, the primary theme is encouraging. This album had features from Playboi Carti, Stevie Nicks, and A$AP Rocky which excited fans and broadened Del Rey’s audience.

Marina Romer (‘22) says, “I love Playboi Carti so I was really happy that he was featured on her album. I don’t normally like slow music so him being on the album made me want to listen to the album and it ended up being so good.”

Norman F****** Rockwell was Lana del Rey’s sixth album released in 2019. This album was extremely popular as it displayed themes of classic Americana and hopeless romanticism. In this album she dates back to her Lolita days in mentioning Coney Island and ice cream which were popular motifs in her previous albums. She also added a popular cover of “Doin Time” previously performed by Sublime.

Her most recent album, Chemtrails Over the Country Club, was released in early 2021. This album strays from her story line in that it is mostly about politics and western lifestyle. Although the themes of the album mostly stray, the western Americana theme is still there. This album supposedly relates back to Del Rey’s days as a waitress before she was famous. She reminisces on those days and almost bashes the concept and burdens of being famous. Although many people believe this album to be her worst, once again there is a large audience that thinks that it is very underrated.

Lauren Meyer (‘22) says, “One of my favorite songs of all time is ‘Tulsa Jesus Freak’ which was released on Chemtrails Over the Country Club. It is not my favorite album as a whole but a lot of the songs are really good and I think that more people should give it a chance.”

Del Rey has solidified her spot as a pop culture icon as she has 20 million regular Spotify listeners and has inspired other artists such as Taylor Swift and many other up and coming artists. Currently, listeners are looking forward to her newest album coming out on October 22 of this year.