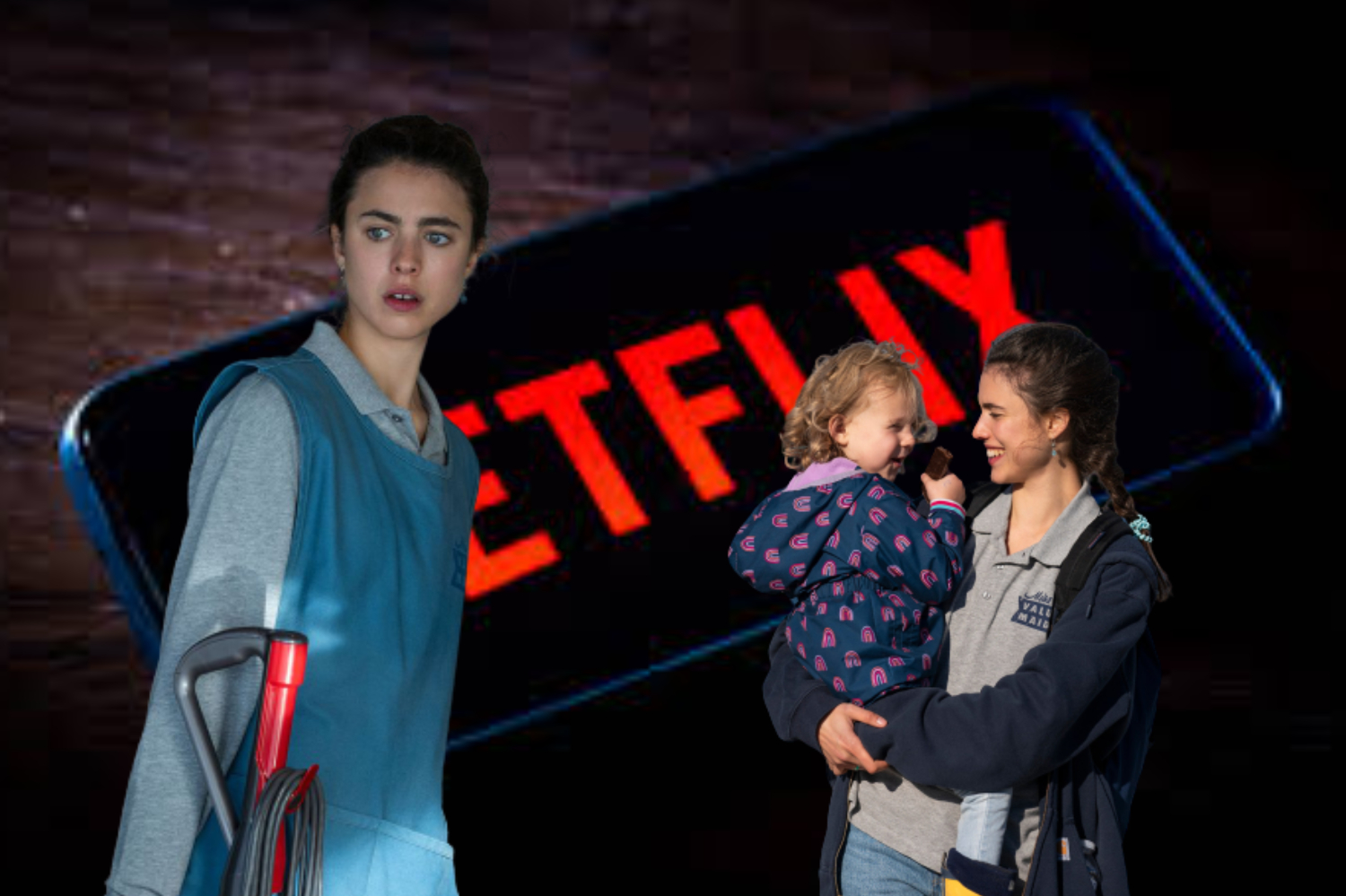 Netflix’s new show MAID stars Margaret Qualley as a homeless mother who will do anything for her child. (Photo Credit: Eleanor Amoriello/Picsart)

Netflix’s new show MAID stars Margaret Qualley as a homeless mother who will do anything for her child.

Another day, another new Netflix show. Fortunately for us, MAID is one of the most well done thus far. A heartbreaking plot that tells the story of a young mother living in poverty coupled with the talents of Margaret Qualley and Andie MacDowell, among others, makes for a show that will have you laughing and crying simultaneously.

MAID begins with Alex, played by Margaret Qualley, leaving her home in the middle of the night with her two year old daughter, Maddy. Alex has no idea where she is going, but knows leaving her abusive boyfriend, Sean, played by Nick Robinson, is what had to be done. She and Maddy end up completely homeless for a few days before eventually settling into a Domestic Violence shelter run by a woman named Denise, played by BJ Harrison. During this time, we are introduced to Alex’s mother Paula, played by Andie MacDowell, who is a free-spirit and artist with undiagnosed Bipolar Disorder. These characters play an important role in Alex’s journey, along with a woman named Danielle whom she meets in the shelter and an old work friend Nate who allows Alex to stay with him when she is kicked out of one of her apartments.

The story
There were no parts that seemed out of place or unnecessary. The writer’s did an amazing job of making sure everything that occurred in the show happened for a reason and added to the storyline. From Alex sleeping on the floor of the ferry station which led her to Nate, to Alex inviting a date to her client Regina’s home which leads to a beneficial friendship on both ends.

Katia Huddleston (’22) said “MAID is such a good show all around. It shows the difficulties of living under the poverty line without being a “pity party” or for the sole purpose of making the viewer feel bad. It is really an interesting show and I definitely recommend.”

Alex’s early twenties as depicted in the show were anything but easy. MAID at its core is a story about a mother’s love. Alex did everything she could to protect Maddy and keep her safe. Getting a job she didn’t know how to do and becoming the best in the company at it, finding somewhere safe for them to live, looking tirelessly for another home just to get Maddy into a better preschool. Alex took her scarce resources and built her life from the ground up, just to make sure Maddy was happy and cared for.

The friendships
Danielle was an amazing ally for Alex in the shelter. Without Danielle, Alex would not have been as self sufficient throughout the series and stuck up for herself against her employer or family members. Obviously, Danielle does not end up being a good friend, but can we blame her? No. She has bigger bridges to cross than worrying about hurting Alex’s feelings. Nate was another key friendship for Alex, but it was not her smartest. There were too many strings attached for her living with Nate to work out, and it does end up falling apart for Alex. However, I think the Nate situation was a good lesson for Alex and it did provide her with a home and a friend she needed in those times. The woman who runs the Domestic Violence shelter, Denise, is overall Alex’s biggest ally. She cared so much for the women in the shelter and dedicated her life to them. She also looked out for Alex when no one else did or would and acted as a maternal figure for Alex when her own mom could not.

She’s the freaking GOAT 🐐 The way she care for those women is amazing! The world need more like her frfr #MAIDNetflix pic.twitter.com/xpPCF95Kix

It became redundant how hard Alex was trying to fix her mom. At some point Alex needed to realize that Paula needed more help than she could provide. In the beginning of the show, Alex did not give her mom as much leeway and was dependent on her being a responsible adult when watching Maddy or just in general. When Alex realizes her mother is a victim of Domestic Violence as she was, she begins to feel more empathy for her mom and dedicates time and resources that she doesn’t have to helping her. She tries even harder to get her away from Basil and when she finds out her mother is homeless, she allows her to stay with Alex and Maddy at Nate’s house.

While this is kind of Alex to do, Paula’s condition was too serious for only Alex to be able to guide her. Alex does try to get her mother professional care when she allows the hospital to keep her in the phycology ward, but ultimately she does not want the help. Until the very last episode Alex tries tirelessly to help her mom and every single time it does not work out. I almost started getting annoyed with Alex for trying so hard. She did everything for the betterment of others and realizing leaving her mom was the best thing for both of them. Alex needed less to worry about in order to live her life to the fullest potential and Paula needed to be able to live without constraints. Paula deciding to stay and not go to college with Alex was probably the best thing to happen to Alex throughout the show.

Jane Ruppel (’22) said “I was kind of starting to get annoyed with Paula and her behavior, but she was trying her best. I think Alex offering to help her in the ways she did was the only way she knew how to help or thought was actually doable.”