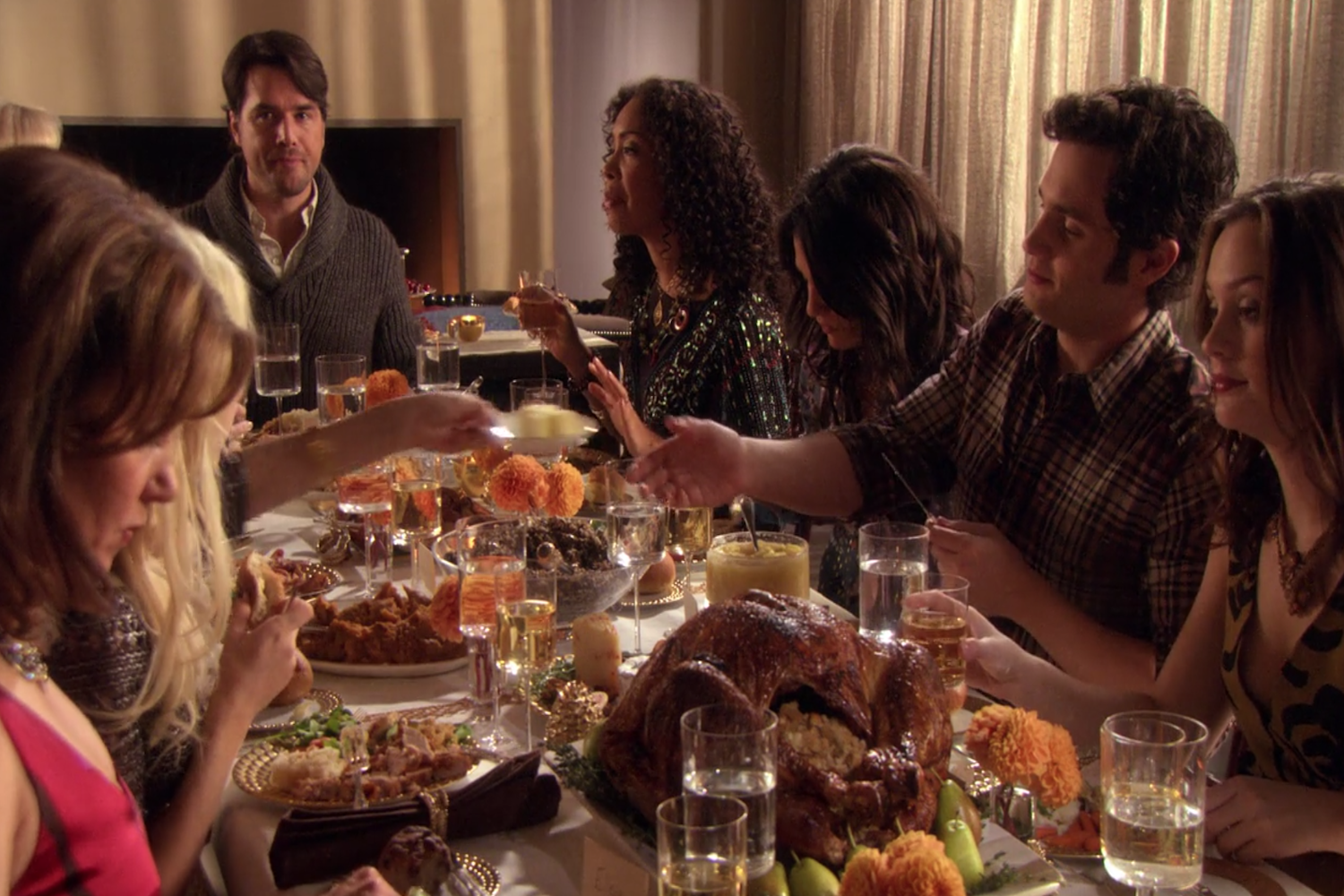 The CW’s Gossip Girl, a show known for its drama, annually released Thanksgiving episodes which were known to be the pinnacle of that season’s drama. (Photo Credit: The CW)

The CW’s Gossip Girl, a show known for its drama, annually released Thanksgiving episodes which were known to be the pinnacle of that season’s drama.

On the day defined by colonization, violence, and the U.S.’s long-time mistreatment of its Indigenous Peoples, many question its validity, its purpose. Is there anything to celebrate on this disgraced day? Of course there is, rewatching Gossip Girl’s Thanksgiving episodes.

When the original was on air, Gossip Girl released Thanksgiving themed episodes that emphasized the drama of the holiday — a tradition being carried on by its successor. The pinnacle of the episode would be the big dinner scene: a moment marked as the height of verbal abuse and family arguments. As a show known for its tension and chaos this creates some of the “messiest” episodes of their respective seasons — when the secrets being held in were finally released. To celebrate this holiday in the most appropriate way possible, I will be ranking these episodes based the level of drama and how amusing it was.

revisiting some holiday classics (every thanksgiving episode of gossip girl)

As this is the worst episode, I will spare myself the stress of saying too much. As season six is the final, and worst, season the plot is confusing and incredibly disorganized. Bart Bass is back from the dead, Chuck and Blair aren’t together because of a pact, and most people are trying to break up Serena and Dan. I do not like this episode because I do not like this season. As convoluted as this show is overall, this season highlights the pitfalls of having a show so dramatic and extravagant.

Another season, another Thanksgiving episode. In the fourth season of this CW show, Serena is drugged by Juliet leading all of her loved ones to believe that she has fallen off the wagon as Jenny and Vanessa return to confront Juliet about their separate plans for revenge. This episode takes the fifth spot of this ranking because of how forgettable it is. Many of the other episodes, namely its predecessor in the third season, have retained their memorability years after the show came off air — while this episode did no such thing.

4. Gossip Girl reboot: Season 1, Episode 7 “Once Upon a Time in the Upper West”

As I am ranking these episodes, I thought it was essentially to include that of the Gossip Girl reboot. This episode marked the end of the show’s four month hiatus, and did so with a bang: introducing new characters and plots, while wrapping up those from the end of “Part 1” of the season. This episode was reminiscent of the iconic dinner scene from Season 3, Episode 11, where all of the secrets were revealed and the season’s drama reached its peak. While it was not incredibly astounding, this episode was not bad in any way, earning it the forth place spot in this ranking.

Despite the extreme level of drama and often-frustrating characters, Gossip Girl remains one of my top comfort shows, so, naturally, I especially love the episodes that take place on Thanksgiving. I’ve found that in these episodes, the visual coziness of Fall that I adore perfectly balances out the sometimes-overwhelming plotline.”

The first three seasons make up the top three of this ranking. In third place is the episode from season one because it is very nostalgic of the themes of the first season. Serena is still readjusting to life on the Upper East Side as Nate and Blair try to fix their dynamic with the knowledge that Nate cheated on Blair with her best friend. This episode embodies the first season, which as emblematic as it was, was written as though Gossip Girl would not be renewed for five more seasons — causing the characters to do seemingly irredeemable things. However, this episode is one of the most wholesome of the bunch earning the third place spot.

The Thanksgiving episode of the second season is one of my favorite episodes of the show overall, so it is only fitting that it would be ranked so high. At this point in the show, Serena is dating the talented stepson of Blair’s stepfather and as Blair adjusts to new traditions. Nate, however, is the focus of this episode as his dad has returned from the Caribbean though he ultimately turns him into the FBI. This episode has one of the simplest plots of all of the Thanksgiving episodes — but this does not take away from the level of drama. All in all, this episode is very sweet as the characters are finally able to find peace in their lives and enjoy quality time with their families — perfectly capturing the meaning of this holiday.

Season three, in summary, was a time when the leads were preparing to enter the professional sphere. As Nate helped his cousin Tripp to become a senator, Serena was involved in an adulterous relationship with the soon-to-be politician. Of course there was more behind the scenes, but as far as I am concerned, this is the most important plot. As these episodes are known for, the dinner scene is the best part of the episode as the characters reveal each other’s secrets and enact their revenge. This episode is crowned the queen of all Gossip Girl Thanksgiving episodes because it best captures the essence of family, drama, and secrecy that this holiday is known for.

Now that the important things are over, enjoy the rest of the holiday. Watch the Macy’s parade, avoid incredibly personal questions from estranged family members, and feast on the beautiful mess graciously gifted to us by The CW with those you love.