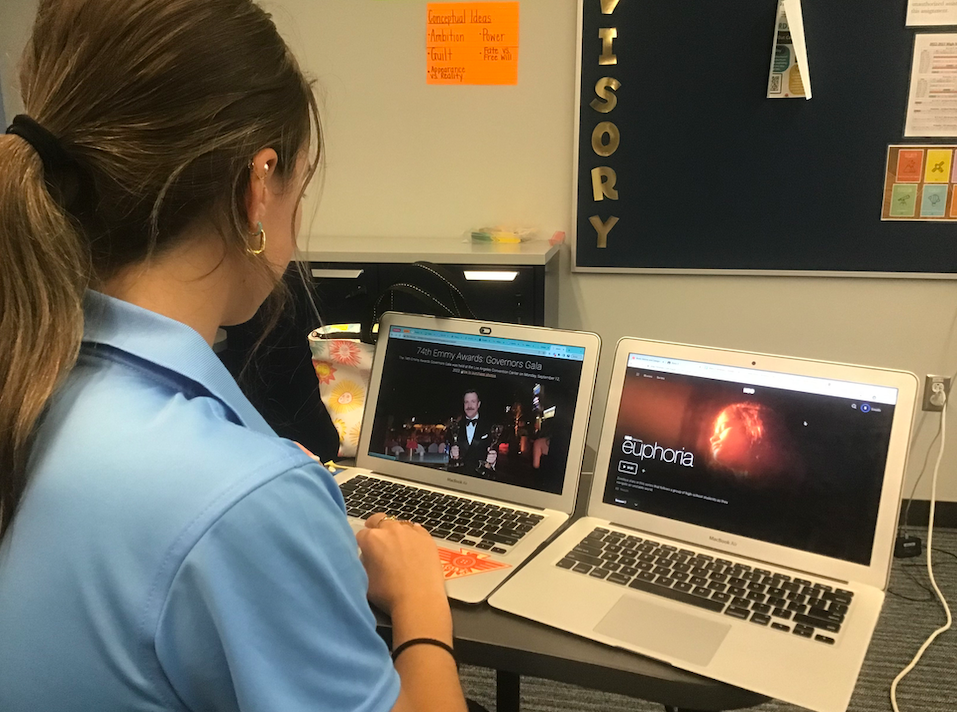 Since Zendaya’s big win and representation of HBO’s “Euphoria”, many people have gone back to revisit her performance. (Smith Cassidy/Senior Staff Writer)

Since Zendaya’s big win and representation of HBO’s “Euphoria”, many people have gone back to revisit her performance.

On September 12, the 74th annual Emmy award show recognized the best television productions and performances of the year. The well-known HBO Max show “Euphoria” received nominations in 5 different categories, and did not leave empty-handed. But, the attention on this season of the show led to a central question of whether or not the show is an accurate representation of drug addiction in this generation.

Zendaya won best leading actress in a television series for the second year in a row for her performance as her character “Rue”. Rue is depicted as a young high school girl who is searching to find herself and goes down a bad path as she begins to involve herself with drugs. She struggles with addiction and experiences symptoms of withdrawal and manic episodes.  Recently, the public has started to realize that Rue somehow always ends up okay at the end of a season when in real life, the outcome is not always as positive.

“I watched the first season of the show, and it was actually really good. But, once my mom caught wind of it she definitely does not want me watching it anymore. She says it’s too graphic”, said Sydney Thaxton (‘26).

A common opinion expressed after the Emmys aired is that Euphoria may glorify drug use or addiction in high school. Euphoria is known for displaying a limited representation of treatment for drug addicts, conveying a very false message to the audience. Teens watching the show who may also be struggling with something similar to Rue may be influenced to feel like there are no options to get help.

“I know where I stand regarding my morals, so I just watch the show for the plot and entertainment. I think it is really amazing and I already want another season”, said Alana Young (‘23).

The lack of treatment representation throughout season two was contradictory with its happier ending. Zendaya’s character “Rue” experiences extreme withdrawal and suffers several manic episodes throughout the course of the eight episodes, and then by the end of the season, she is much healthier and not going through any symptoms.

Lately Zendaya, the rest of the cast, and the production team have been receiving heat about some of the content displayed. While the acting is critically acclaimed, as seen with its many awards won, whether or not teenagers should be watching it is still under review by the public.

On the other hand, “Euphoria” is one of the most highly respected shows for this generation. People find comfort in the show because although it does show an exaggerated version of a normal high school experience, many of the serious plot lines can be relatable for teenagers watching. Zendaya and the rest of the cast on the show do an incredible job of portraying the true emotions and mental health struggles of present high schoolers, unlike in other shows.

“I am really not shocked about Zendaya winning best lead actress for her performance in “Euphoria”, she has always been an outstanding actress. I think she could be in any show and win an Emmy, so reflecting the content of the show, including drug use, is not really necessary because no matter what people are going to watch it if Zendaya is in it”, says Adele Politz (‘23).