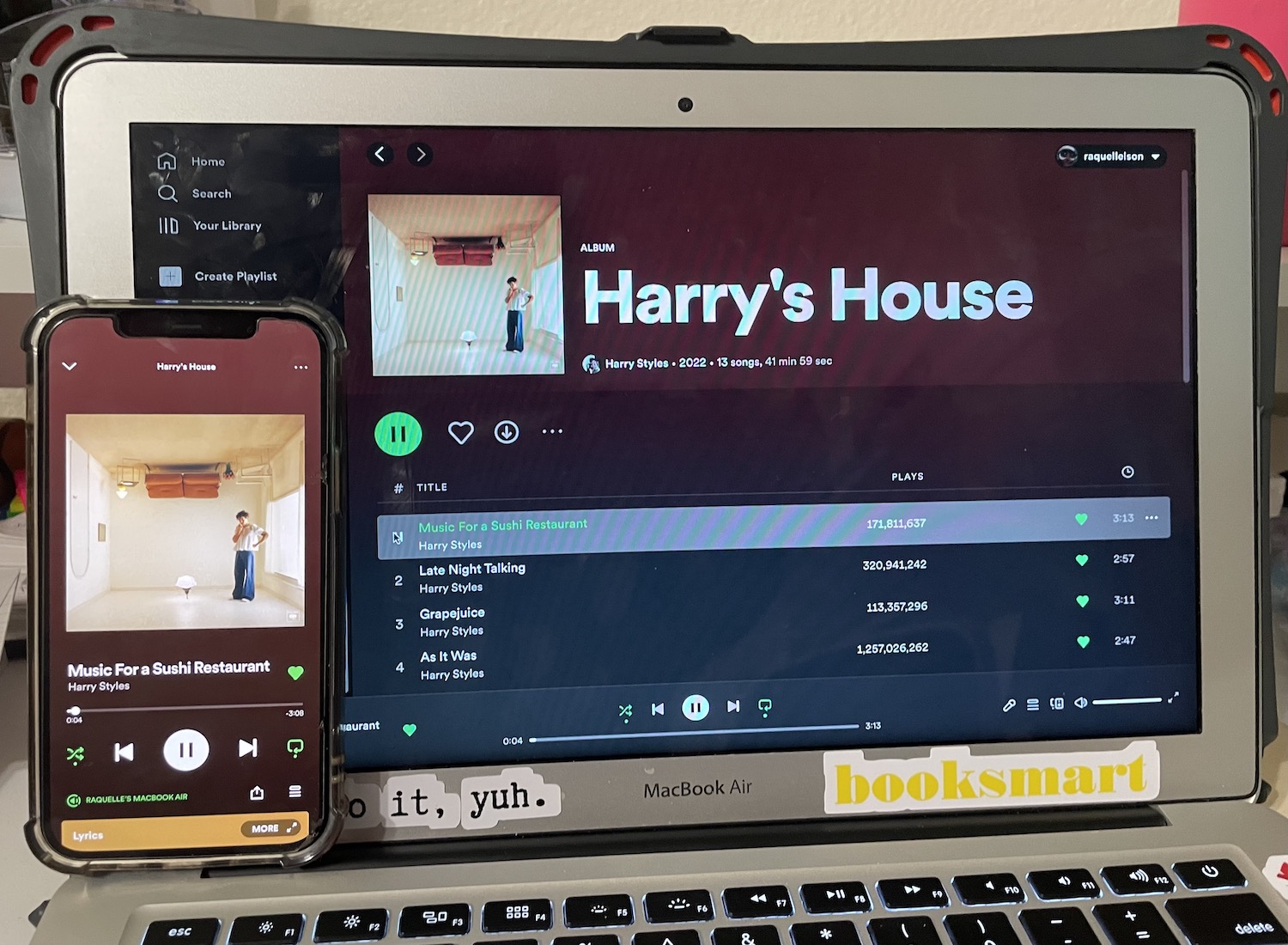 On May 20, 2022, Harry Styles released his third solo album entitled Harry’s House. The album was written, recorded, and produced throughout the quarantine of 2020 which provided a lot of the inspiration for the album.

Styles described this album as his journey to find a home following his tour and during the lockdown, but also an album dedicated to both the romantic and platonic loves of his life. While the album retains an overall dreamy sound, songs such as “Boyfriend” and “As It Was” have a sadder and sometimes darker tone to them. The theme of Styles describing love is present throughout the work, and he utilizes the different forms of love in a very tasteful way. An argument could be made that every song on this album is a love song. From “Daydreaming” explicitly being about the perfect relationship to “Matilda” being about familial love or the lack thereof, each song describes love in a new way.

While the album has been well received, many fans have expressed that it falls short of the standard established by his first solo album, Harry Styles which was released in 2017. Many attribute their discontent to Styles’ experimentation with a more electronic sound which is more prevalent than it has been in his previous works. I, however, believe that these stark differences make it more difficult for me to compare his albums. While I can agree that this album does not surpass his past work, I also think that this album achieves merit of its own.

“I don’t typically listen to too much Harry Styles, but I enjoy his music. Personally, I think Harry’s House is quite upbeat and energetic which I appreciate. I always love his slower more sad songs though, so I wish it had a little more of those.””

Based on how much I enjoy them lyrically, melodically, and overall, here is my ranking of Harry’s House.

“Boyfriends” is my least favorite song on this album (clearly) because its details a situation that has been overdone, and I believe there are too many other songs that execute it better. I believe the story of a bad boyfriend is best conveyed when it is told by the girlfriend rather than an onlooker. However, the song is not unenjoyable as Styles showcases his beautiful lyricism throughout the song.

Favorite Lyric: Weakened / When you get deep in / He starts secretly drinking / It gets hard to know what he’s thinking

“Love Of My Life” is every hopeless romantic’s dream, despite the fact that the song was written for Harry’s home – England. I thought it was a little boring on such a pop-heavy, upbeat album, but I do not think there is anything technically wrong with the song.

Favorite Lyric: Don’t know where you’ll land when you fly

Lyrically, “Cinema” is not as complex as Styles’ other songs, especially his best ones. However, I don’t think every single song needs to be excessively thoughtful. Also, I enjoy Harry’s continuous venture into making more promiscuous music, so I could not rank this dead last.

“I love “Late Night Talking” because I love the beat and the way the song makes me feel. It’s just so much fun to listen to.””

“Music For a Sushi Restaurant” titularly was born from Styles hearing another one of his songs while getting sushi in LA, and I think this is a perfect description of a lot of his newer music. It is the perfect album opener, and I thoroughly enjoy the allusion to the Ant Farm theme song in the beginning. This is one of the songs many listeners cite to express their distaste for his more electronic sound, but I think it is a beautiful break from more dense songs.

Favorite Lyric: If the stars were edible / And our hearts were never full / Could we live with just a taste?

“As It Was” is a beautiful song, but I ranked it lower than most because it is just a tad too accurate to my current stage of life to appreciate. The reminiscing of life before a major change, namely the pandemic, is one everyone can relate it, but it is more relatable being that it is my senior year. Musically, it is one of my favorites off of the album and is a favorite of mine to drive to in the mornings.

“Daydreaming” is a pop-centric song that represents Styles’ latest endeavors into a more electronic sound, describing a relationship so perfect that it is like a dream. While I did not dislike this song, it lacks depth lyrically and with the absolute mastery of the songs I ranked highly, it could only fall short.

Favorite Lyric: So give me all of your love, give me something to dream about

this has to be the best sampled song i’ve heard in my life not even kidding https://t.co/fk7lHL4RY6

One of my most listened-to songs off of the album is “Late Night Talking.” It speaks to me personally because I have spent many late nights comforting and being comforted by my friends, and it is something I genuinely enjoy so much. Thematically, it has a hopelessly devoted to you element which I adore because being so deeply in love with someone like this is so pure and wonderful.

Favorite Lyric: Now you’re in my life / I can’t get you off my mind

“Keep Driving” beautifully describes the end of a relationship in which you can see everything falling apart, but it hurts too much for the relationship to end. I also love the imagery in the song. The element of desperately trying to keep going when you know you should stop hurts in a way that is too good.

Favorite Lyric: We held darkness in withheld clouds / I would ask, “Should we just keep driving?”

My fifth favorite song on the album is “Daylight” because it is one of the most melodically pleasing to my ears. The fact that the many references and eerie story of this song went straight over my head on the first listen emphasizes Styles’ lyrical prowess. He manages to make a distressing song sound so beautiful that many listeners hear nothing but an unrequited love song.

Favorite Lyric: If I was a bluebird, I would fly to you

“Little Freak” details the story of lost love and a relationship that ended too soon. While it expresses discontent with the relationship, it does so in a way that lacks animosity towards the other person, which I love. Opening the song with “Little freak, Jezebel” served as the perfect hook to stop listeners, or at least me, from skipping to the next song.

Favorite Lyric: I was thinkin’ about who you are / Your delicate point of view

“My favorite song varies on a day-to-day basis, and so I’m just going to go with my favorite today which is “Satellite.” I love how it switches from slow and calm to more upbeat and fun, so it’s the perfect song for any mood. Also, the bridge is absolutely fantastic and it’s so fun to see videos of Harry dancing to it onstage,” said Sydney Thomas (‘23).

“Grapejuice” is an incredibly underrated song in my expert opinion. It is melodically one of my favorite songs on the album. I have no real analysis of the song because every time I listen to it I am too distracted by the noises to truly perceive the lyrics and their meanings.

Favorite Lyric: There’s just no gettin’ through / Without you

The classic parental issues song of this album is “Matilda.” Inspired by the Roald Dahl character, this song is a message to everyone grappling with complicated feelings towards their families. It has been one of the most well-received songs off of the album because everyone needs a hug and a little validation every once in a while.

Favorite Lyric: You don’t have to be sorry for leaving and growing up

The number one song on Harry’s House is “Satellite!” It is my favorite song lyrically and melodically and is always the first song from the album that I want to listen to. This song describes attempts to support your emotionally distant friends through the symbol of a satellite which is genius as satellites are meant to improve communication but are thousands of miles from the surface of the earth. The sound of the song fluctuates beautifully as it progresses, allowing listeners to feel all of Styles’ emotions with him. It perfectly ties together the meaning of the album addressing themes of love, loss, and yearning while also being a little sad.

Favorite Lyric: I can see you’re lonely down there / Don’t you know that I am right here?