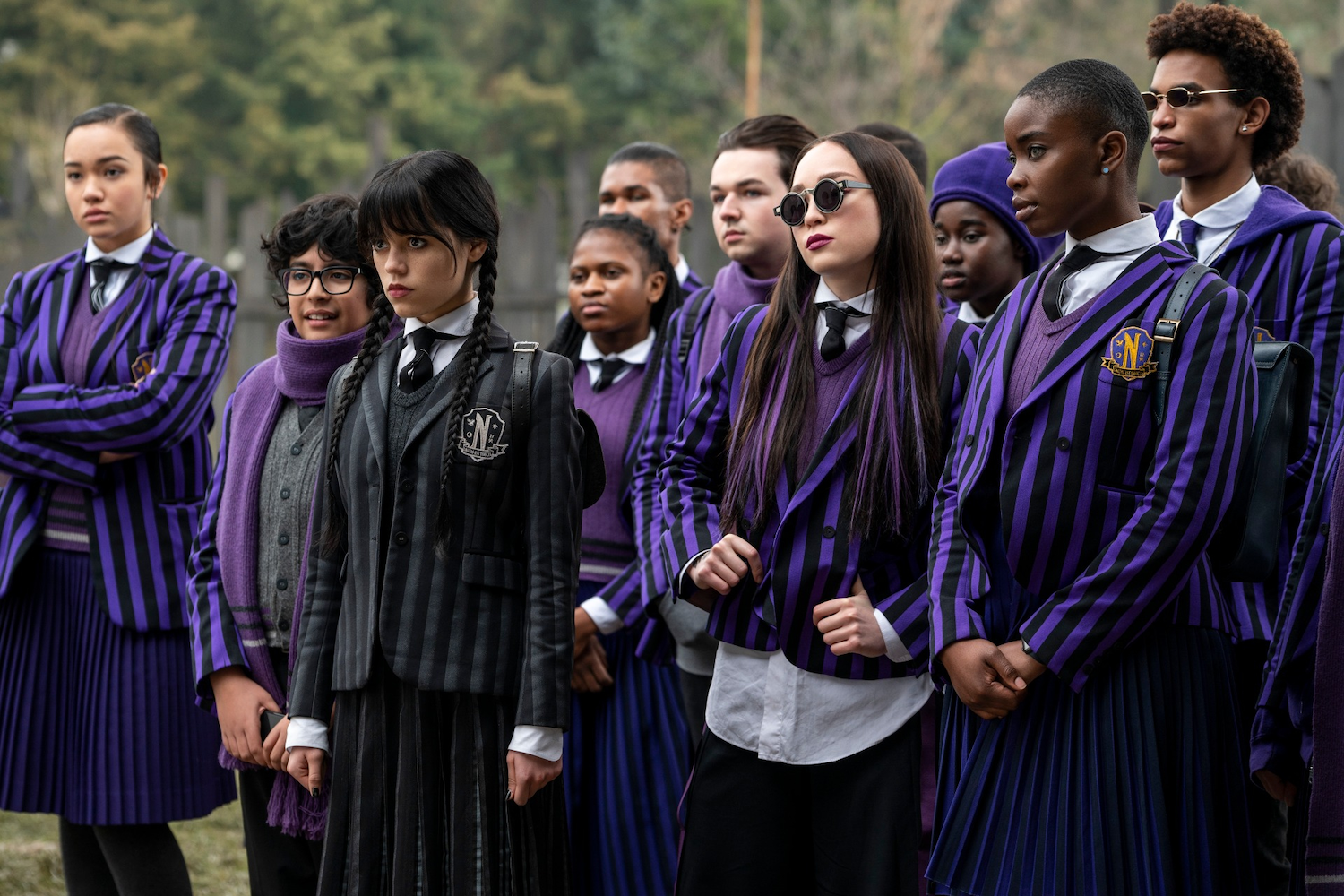 Wednesday and other Nevermore students went into the town of Jericho to participate in Pilgrim World. (Photo Credit: Netflix)

Wednesday and other Nevermore students went into the town of Jericho to participate in Pilgrim World.

Disclaimer: This story contains spoilers for the show "Wednesday."

Wednesday, a much anticipated Netflix series was released on Wednesday, November 23. Wednesday is a spin-off of the 1964 show, The Addams Family. The original show is about an unusually gothic family that has a strange obsession with death and all things terrifying. The Addams Family has also had several movies with the same title with various storylines. Wednesday is a series based on the Wednesday Addams, the teen daughter from the original show and more recent movies. Wednesday’s dry and deliberate delivery of dialogue has attracted the attention of Addams family newbies and enthusiasts alike.

Carolina Ward (‘25) said, “I loved Wednesday! The plot twists and the different roles all the characters played in the plot made me super invested in the show. I watched it super quickly and I can’t wait for season 2.”

The parents of Wednesday are Gomez and Morticia Addams. Wednesday has a younger brother named Pugsley. The series continues its gothic theme but is mainly focused on high school-aged Wednesday, played by Jenna Ortega, who is a highly intelligent and talented student. Wednesday is expelled from her normal “normie” high school and is encouraged to attend Nevermore, the same school attended  by her parents. This school is a boarding school for outcasts, many of whom have unique powers. While this may sound cliche, the writers do an excellent job of bringing these fantasies to a compelling script. Wednesday soon begins to uncover some dark secrets and, it is soon revealed that a murderous creature is haunting the woods surrounding the school.  The plot centers around Wednesday attempting to solve the mystery of the identity of the creature while creating both alliances and enemies throughout her time at school.

One of the highlighted themes of the series is to never judge a book by its cover which is shown through the actions of the inhabitants of the sleepy town of Jericho which surrounds Nevermore. The townspeople and the students at Nevermore have always had a tension-filled relationship, but they are forced to cooperate in order to solve the pressing mystery before more murderous crimes are committed. Through this cooperation, the characters start to learn that they have more in common than they previously thought.

Wednesday now holds the record for most hours viewed in a week for an English-language series on Netflix, with 341.2 MILLION HOURS!

Here is my candid review of the series after watching all eight episodes (Yes, I totally binged out over Thanksgiving break!):

I have always loved watching the Addams family movies. On Halloween, I watch the originals, and I have also seen the two cartoon movie spin-offs. However, this show was different. I think that doing a whole show only focusing on Wednesday is a great idea. Wednesday is sarcastic, funny, and just a truly entertaining character. I believe that Jenna Ortega perfectly captured every aspect of her. Jenna Ortega took weeks of fencing and cello lessons in order to give Wednesday’s life authenticity. I think what made this show really great, however, is the casting. Specifically, Romanian actor George Burcea as Lurch really stood out as a perfect fit for the role to me.

English Teacher Angela Leavens said, “I love that Christina Ricci is in it because she is an original Addams character. I need to watch a little bit more.”

In my opinion, the plot was excellently executed. Right away, the audience is roped into the series as Wednesday takes revenge on her brother’s bullies and is expelled from her school. There is certainly a lot of action early on in the series. Additionally, the setup for the introduction of the school, Nevermore, really helps the audience to understand its significance to the Addams. This is because Nevermore is the place where Morticia and Gomez fell in love, and part of the love story showcases a plot twist. When Wednesday finally arrives at the school with dread and a bit of anticipation, the wild diversity of students and faculty immediately deepens the audience’s interest. There are two types of characters that are differentiated in the series, normies who are “normal” people and have no powers, and outcasts, people who have supernatural abilities. We are introduced to a variety of characters including Enid Sinclair, werewolf; Ajax Petropolis, gorgon; Bianca Barclay, siren; Xavier Thorpe, psychic; Principle Weems, shape-shifter; Yoko Tanaka, vampire; and Marilyn Thornhill, normie and Wednesday’s homeroom teacher who turns out to be Laurel Gates who has been mastering a scheme to eradicate outcasts. We are later introduced to Dr. Valerie Kinbott (Wednesday’s psychiatrist) and Tyler Galpin (Wednesday’s normie love interest). Throughout the series, watchers are constantly given morsels of information on characters that leave them questioning who the killer might be.  This is the main conflict and mystery of the series, the identity of the mysterious being on a killing spree in the woods near the school. Personally, I really enjoyed this mystery and felt like there were many plot twists and I definitely never suspected that Tyler would be the murderous Hyde with Mrs. Thornhill/Laurel Gates as the mastermind behind it all. I have always been proud of my acumen at guessing the end of a story, however, this one got me!

With every great series comes some criticism. My biggest critique is that I feel like there should be more foreshadowing included in the series. Usually, there are hints along the way that point to events in the plot, but everything came as a surprise to me. Maybe that is a complement to more of a critique, but I do like to build my case and have the satisfaction of being right at the end. Additionally, some of the last half of the last episode was a bit too dark fantasy and less relatable than other parts in the series. Actually, one in particular part had a Pirates of the Caribbean vibe that just didn’t seem to fit.

Family life is killing me. Time to lose the dead weight. pic.twitter.com/NlkAH8YVSO