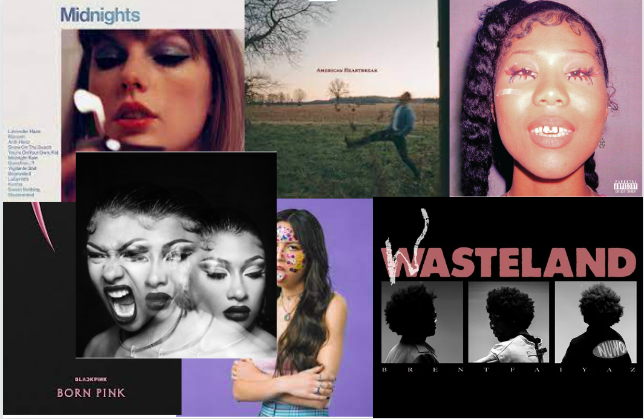 While Achona staff enjoyed lots of different music this year, we picked some of our favorite albums to highlight. ((Photo Credit: Smith Cassidy/AchonaOnline/Piktochart))

While Achona staff enjoyed lots of different music this year, we picked some of our favorite albums to highlight.

With the year coming to a close, Apple Music and Spotify have released their music replays and wraps. This allows all listeners to see what their top albums, artists, and songs were for 2022. In the spirit of these features, Achona is presenting the staff’s top albums of 2022.

The first album that took over many of the staff’s Apple Music replays and Spotify wraps is Taylor Swift’s newest, Midnights. Ever since it was released in October, this album has taken over the music charts. Swift used this album to reflect on her past and convey the theme of reinventing herself within the songs. Many fans, including our staff, eagerly anticipated the album and were especially eager to know the album well after the announcement of her tour.

“I love Taylor’s new album because I have always loved her voice and I think a lot of girls can relate to her music,” said Senior Staff Writer Maddie Hines.

Secondly, the new album Her Loss by rappers Drake and 21 Savage is a fan favorite for some of our staff. Many say it is a great hype-up album and they name it as a favorite of the entire year for its high energy and inventive lyrics. There are a lot of featured artists on these tracks as well, and the versatility of the album appealed to listeners as well.

“I loved Drake and 21 Savage’s new album Her Loss because they are my two favorite artists and it is very upbeat,” said Media Manager Olivia Book (’23).

Even though this album was released last year, Olivia Rodrigo’s debut album Sour has shown up on many replays for 2022. Rodrigo shows a lot of emotion and variety in this album, as some of the songs are very upbeat and display a punk rock influence, and others are slower and more emotional. This album continued to excite a lot of listeners, hence why it continues to be in the top five for the following year after its release.

“I loved this album because the majority of the songs were very fast and upbeat so my friends and I could scream them very loudly in the car so it could put us in a good mood when we were on the way to something,” said Senior Staff Writer Kinsley Warbritton.

Megan thee Stallion’s album Traumazine reflects on her personal life through the eyes of a woman of color. In many of her songs on this tracklist, she refers to recent injustices such as the death of Breonna Taylor and also speaks about the discrimination she has faced as a Black woman in her lyrics. This album was much more serious and personal to Megan, and she shows the audience a different side of her as a songwriter while maintaining her witty and impressive rap style

“I really enjoyed Megan Thee Stallion’s newest album, Traumazine. I thought it showed a lot of depth and revealed a more introspective side of Megan that went beyond the persona presented in her previous albums. I also liked seeing a more political side of her and seeing how she blended it with her At the same time, it had the same witty wordplay and snappy disses as her previous albums. Overall, I really liked seeing this new side of Megan, and I hope these more serious themes continue into her next albums,” said Editor-in-Chief Isabel Bequer (’23).

Wasteland by Brent Faiyez has easily secured a spot in Achona’s top ten albums of the year. This R&B/Soul album displayed very smooth vocals along with orchestral production in the background. Three of the 19 tracks on this record are skits,  inspired by Faiyez’s love for director Quentin Tarantino’s movies. Overall, this album spoke volumes to many fans and has stayed on everybody’s radar, including some of our staff.

“I thought this album’s tracks were very alternative and different from what he usually produces, that is why I loved it so much,” said Senior Staff Writer Asha Judd.

Another top album of 2022 for our staff was BLACKPINK’s newest record, called Born Pink. Released just this year, this album is a mix of pop, disco, and balladry, as many of the songs dig deeper into the image of BLACKPINK, since their start in 2016. Many fans believe this album is a new beginning of a different and softer sound in the K-Pop genre.

Quote: “I enjoyed Blackpink’s new album because it’s been forever since they’ve been able to release music, and the songs were all amazing,” said Managing Editor Winsome Storm (‘23).

Lastly, Zach Bryan’s album American Heartbreak has easily taken a spot in the top albums of 2022, not just for our staff, but many listeners around the world. This album is a mix of upbeat and mellow songs, where Bryan’s raspy voice and incredible lyrics shine throughout his country-esque music. Many love this record because although he is known as a country artist, this album also demonstrates an indie/pop style in some of the tracks as well.

“My number one song was from this album, he was also my number one artist, and the album was my number one. I listened to this album 270 times since it was released, I love it so much,” said Senior Staff Writer Genevieve Chiellini.