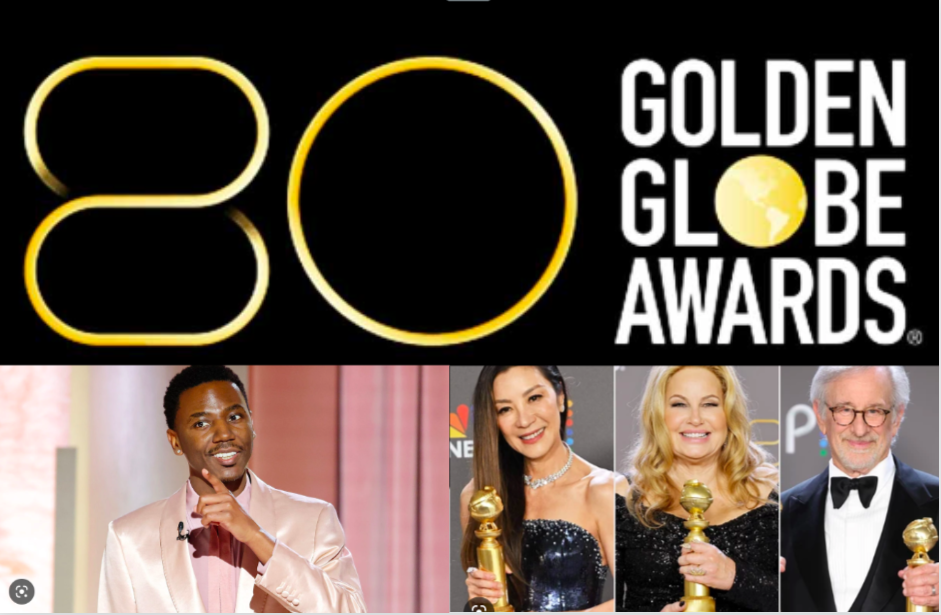 On Tuesday, January 10, the 80th Golden Globe Awards took place in Beverly Hills, California. Many films and television shows were honored, and the event was hosted by Jerrod Carmichael. Carmichael was the first Black host for the show and many of the viewers had a lot to say about the inclusivity of the awards show industry due to the controversy from last year’s show.

After the 2022 Golden Globe Awards, there was an outcry from the public because the Hollywood Foreign Press Association did not have any Black members on the board. This association is a major factor in the results of the rewards for the event, as they are the ones who consult and choose the winners for each award. Many filmmakers and actresses expressed their disappointment because they felt at a disadvantage because of their lack of representation in the industry.

“I watched the awards this year, and I was not aware of the controversy from the year before. But when Jerrod Carmichael made comments about his race and how it was the only reason he was hosting the event, I looked up the events from the 2022 awards. I did not realize how the awards industry was so dated until now,” said Ava Politz (‘23).

With Jerrod Carmichael hosting, he made many remarks to reference the controversy from last year’s events, as he said in his opening monologue, “I’m here because I’m Black.” He was instigating that the HFPA only appointed him to host the show to show the progress in inclusivity they are trying to achieve for future events.

The HFPA has spoken out through the president of the association Helen Hoehne who said, “We commit to continue strengthening our partnership with Hollywood and with the worldwide fans who celebrate the best on film and television.” Since this scandal, many people have lost respect for not just the Golden Globes, but also other awards shows that have also been lacking in representation for actresses and filmmakers who are of color.

The entire awards show industry has gone down in relevancy and viewer count. The American public has paid exponentially less attention to the results of award shows like the Golden Globes because they have lost trust in their credibility. The HFPA and other associations still have a long road to reformation to please the public eye and be more diverse and inclusive, but this year’s Golden Globe Awards was definitely a start in the right direction.

“I am an avid TV and movie watcher, so I love seeing all the actors and actresses getting recognition for their roles in my favorite movies and shows every year”, said Lauren Donofrio (’23).