5 Places to See Before They Disappear 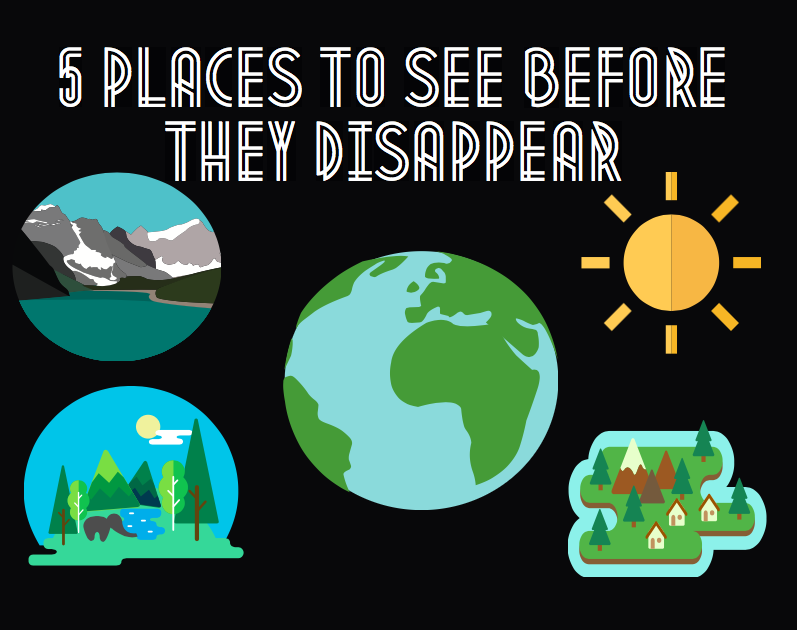 Going, going, gone! Sooner than later the world will be losing some of its most notable sights. The world suffers from environmental changes and global warming and it has begun to take a toll on major landmarks around the globe. Global warming has caused polar ice caps to melt which results in rising sea levels and an increase in severe weather catastrophes. Below are locations to visit and take pictures of before they vanish for good.

The world’s largest coral reef is deteriorating quickly after the severe mass coral bleaching event in 2014. Causes like water pollution, climate change, and ocean acidification have threatened to demolish the reef over the past century. The coral has also been affected by the rising sea-water temperatures which have resulted in the reef dying faster than usual. Marine biologists have estimated that the majority of reefs will have been perished by the time 2030 comes around. This natural creation which formed in 8000 years could be lost in less than 100 years.

Take a little time out to relax and soak up the serenity of the #GreatBarrierReef with @OceanSafariCT pic.twitter.com/tt427kGo0T

Venice, located in northern Italy, is known for being a romantic city leaving tourists awestruck. However, Venice is also notorious for having canals instead of roads. Each year, floods become more frequent and severe in this region. Sea levels rise four to six millimeters per year as a result of this. Venice has sunk nine inches in the last 100 years. The rising sea levels in Venice have caused the well-renowned city to sink.

“I want to travel to Venice because I think that it is so cool that the city is basically floating on water” claims sophomore Delaney Lambert.

The Dead Sea does NOT actually have dead bodies floating around, but it is the world’s saltiest body of water. Being ten times more salty than the ocean, the Dead Sea is 33.7% salinity. In the last 40 years, the lake has shrunk by a third; since the 1950s, the Dead Sea has dropped 131 feet and water levels have continued to drop four feet per year. The waters have dropped so low that it has been given the title of “lowest place on earth” with an elevation of 1388 feet below sea level. The lake has been receiving less water from the Jordan River which in turn, has caused it to shrink.

Junior Abbey Bennet shares, “I want to go to the Dead Sea [before it disappears] so I can float on top of the water!”

The European Alpines are the highest mountain system in Europe. Since the 1880s, temperatures have increased twice as fast as the global average temperature and every ten years. The temperature increases by 0.72 degrees Fahrenheit causing the Alpine glaciers have lost 20 percent of their size in the past 36 years. Global warming has caused their glaciers to melt and threatens ice loss.

On the Canada-Montana border lay the pristine forests, rugged mountains, spontaneous lakes and glaciers of Glacier National Park. However, where there were 150 glaciers in the early 1990s, there are only 25 now. It is expected to have zero glaciers left by 2030. Studies now show that man-made global warming has majorly affected the park. With the absence of glaciers, what will the national park be named then? Also, will the ecosystem of the park change dramatically once there are no glaciers?

Freshman Lauren Jones hopes to travel to one of these landmarks “because they are some of the greatest wonders of the world and it is a great tragedy that they will be gone nearly within my lifetime.”

Global warming, the cause of the majority of these issues, is a topic that is vital to society, but not talked about enough. Any person, not just our next president, can be making a difference and helping out. Here are a few simple ways to prevent global warming.