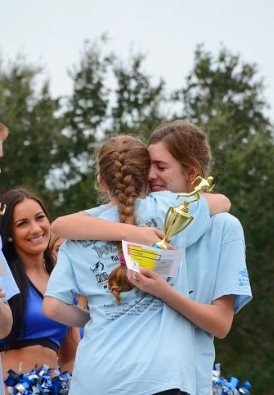 Cross Out Cancer returns November 19, 2016, the Saturday before Thanksgiving.

Senior Lizzie Dolan is one student who truly contradicts the statement “you can’t do it all.” In 2015, Dolan changed the lives of many cancer patients at All Children’s Hospital after designing her own 5K known as Cross Out Cancer. After debuting last November, the run is making its return on November 19, 2016. Similar to last year, Dolan gathered with roughly ten other high schools, including Jesuit High School, Plant High School, and Berkeley Prep, to prepare this year’s wildly successful event. Although everything ran smoothly last year, Dolan and her team have decided to change things up for the upcoming race.

Sophomore Greta Dieck, who will take over the run after Dolan graduates, shares “Although I ran last year, I believe that this year the race will feel different because our team is much more cohesive and we have the basic outline for what our goals are. I’m excited to see the hard work that goes on behind the scenes made tangible!”

Starting off, Dolan shares that she, along with her board, plan to participate in more fundraising events. In contrast to last year, the 5K team had an entire day dedicated to brainstorming ideas.

Dolan shares “We used white boards, made mind maps, and assigned a specific business to every representative. It’s really made a difference, even if the reps aren’t getting money. We’ve gotten maybe $2,000 already from just that which is awesome.”

As opposed to last year, the goal is to raise roughly $50,000, all of which will be donated to All Children’s Hospital in St. Petersburg, Florida. The team also hopes to have roughly 500 participants of all different ages. Dolan reveals her inspiration comes from the participants and those who are apart of the cancer community.

Today we visited All Children's Hospital and we were even able to meet some of the patients! pic.twitter.com/SrrIbMx9D3

She exclaims that she is “pumped to write that check for over $50,000. It’s been a long two year journey, with a lot of people doubting me in the beginning, and I guess this is kind of my way to say ‘hey, look what the XC [Cross Country] community did.”

Although on the outside, Dolan seems extremely confident for the second-annual race, she is actually quite terrified. The stress and nerves are already catching up to her, to the point where she has dreams that no one will show up, or that the amount of money raised was much lower than expected. She fears that last year’s success was a one time deal and that people won’t be as eager to sign up.

Being a senior in high school, this is a big and stressful year for Dolan. Adding a 5K to her list of things to do definitely makes her high school schedule a little more hectic.

“Last year,” she admits, “this 5K basically became my life… I was OBSESSED! I mean, I definitely still am, but on top of that I am having to work hard in classes and get my college applications turned in. It’s a lot.”

Despite her fears and stresses, Dolan cannot wait for the upcoming event. She hopes more Academy students, especially freshmen and sophomores, attend and participate in the race. In addition to Academy students, she anticipates that more students from other schools, such as Jesuit, come and support the cause. As opposed to last year, Dolan is calling for more runners, since a majority of participants were volunteers last year.

As for the future of Cross Out Cancer, Dolan hopes it’s a lasting event.

She exclaims “I want to be able to come back in ten years, have a community of cancer families that share stories of how this fund helped them, and a group of dedicated runners every year who put this together. And I believe it is possible.”

Dolan reveals she has a “permanent adult board” which runs much of the behind the scenes work. In addition to her team of adults, Dolan praises her team of phenomenal underclassman. She puts the spotlight on sophomore, Greta Dieck, who is going to be the new leader of the race. In order to prepare for the upcoming years, Dieck is a part of the “core board”.

Dolan shares “I think she’s got what it takes to keep it going. I am just so excited to sit back and watch it all unfold. This is my dream.”

Being the second-annual event, Cross Out Cancer is clearly a success in the Tampa Bay community, however it’s about to become a success on the opposite side of the nation; in Seattle, Washington. A friend of Dolan’s will be hosting it and the proceeds will go directly to the camp that sparked her idea, Camp Agape. After expanding it to the West Coast, Dolan hopes it continues to move through to places such as California, Oregon, and even back over on the East Coast in New York.

The second Cross Out Cancer 5K will take place on November 19 at Picnic Park Island. Similar to last year, participants will start in an open field and run (or walk) through the beach, an open road, and a small golf course. To participate in this event, there are options online to either donate or sign up to run in the race. Sign up fees are $27.50 and the deadline is the night before the race, November 18, at roughly six o’clock.