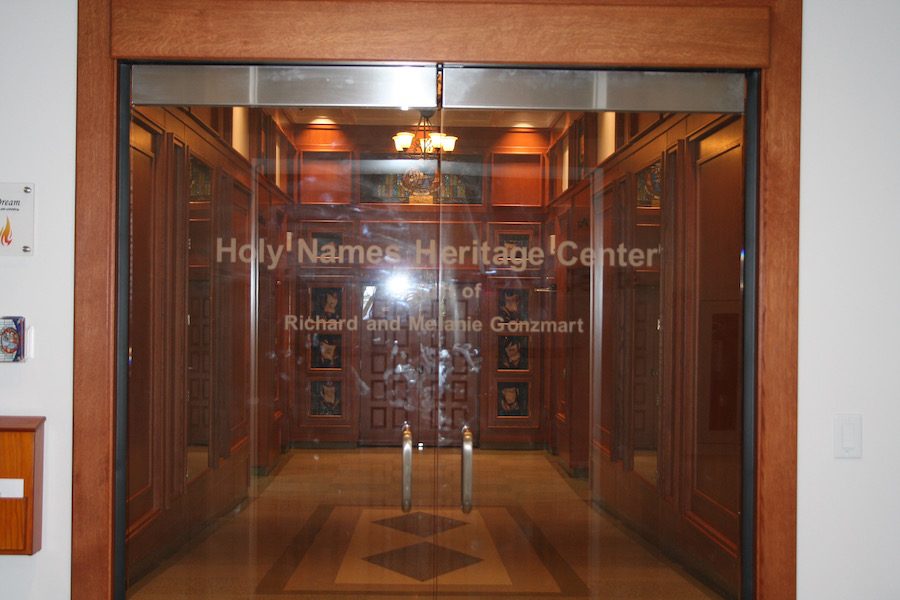 The entrance to the Heritage Center is welcoming. Photo Credit: Sara Phillips/AchonaOnline

According to West, the idea of a historical center was “put on the back-burner until President Raimo arrived.”

Raimo was the driving force in creating the Heritage Center, which Academy archivists planned for over a year. Construction began on June 6, when a team of architects, administrators, graphic designers, stained glass artists, volunteers, and interior designer, Kristin Hemphill, set out to create the beautiful new entryway to the Chapel.

The Heritage Center has four galleries focused on telling the story of the Sisters of the Holy Names and their impact throughout the years. One display case honors the Sisters and Alumni, while another focuses on the Sacred Heart Academy. The “Beyond Bayshore” Gallery tells the story of the many schools and institutions the Sisters of the Holy Names have founded in our community and in southern Florida, including the Convent of the Mary Immaculate in Key West. The Ambulatory showcases two displays dedicated to Blessed Marie Rose, highlighting her biography and mission to educate women. The display also includes pictures of flowers symbolizing the Sisters’ core values, such as the magnolia, which symbolizes the full development of the human person.

Junior, Julia Lee, reveals that she is “excited to see the archives and experience the air conditioning, which the Chapel entrance did not have before.”

The Heritage Center was completely off-limits until October 6, and the student body was held in suspense while the construction team finalized the project, using hung paper to prevent any glimpses through the glass doors. Students and teachers alike admired the stained glass windows for weeks, which are visible from the outer walkways around the Heritage Center.

The windows are gifts from donors, and were perfected by the stained glass company, KATGLASS,  who spent hours matching glass textures so the Chapel glass and Heritage Center glass looked as though they were done at same time.

Math teacher, Jessica Lamm, exclaims, “I think it looks really awesome!  I think it’s great that Academy has remodeled the Chapel foyer to become a place of pride and beauty.”

The new Heritage Center is a beautiful space to learn about the history of the Academy of the Holy Names, the Sisters, and honor the Academy’s traditions. A reception will be hosted at the Heritage Center on October 12, and the Archive team hopes that Academy students and parents will come to discover AHN’s new addition. 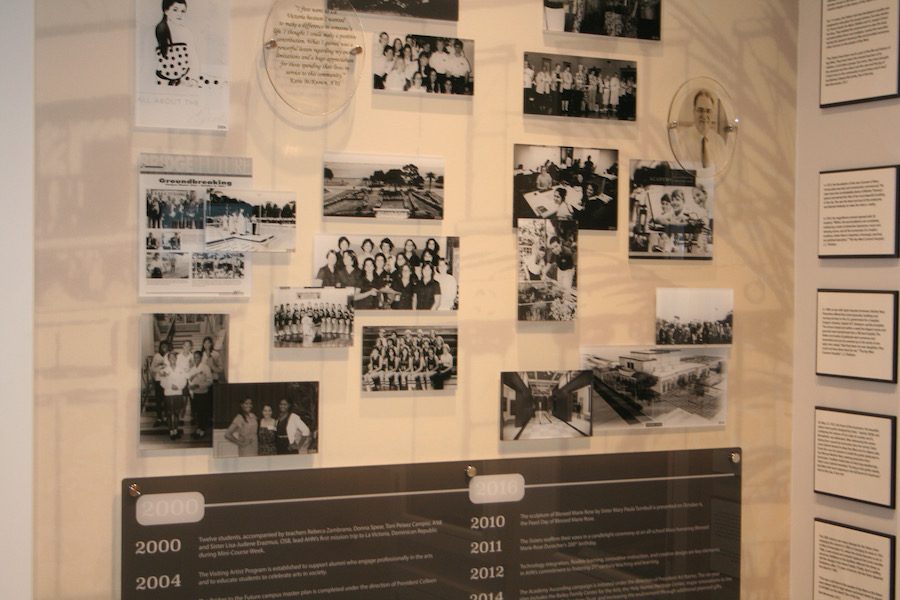 Gallery|5 Photos
One of the galleries includes a timeline of the Sisters' influence. Photo Credit: Sara Phillips/AchonaOnline
Leave a Comment