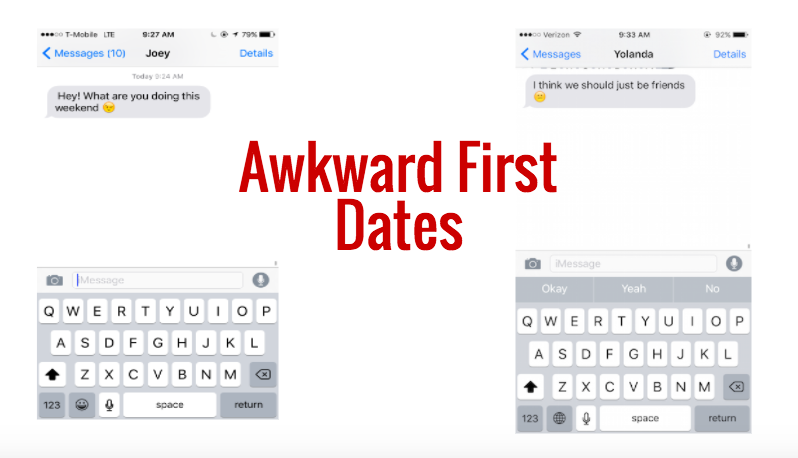 Going to Academy has countless advantages, one of them being no boys. Despite the non-existing pressure to look good for them or to act a certain way, Academy girls do not totally despise  boys. However, occasionally a date with a guy can go completely south, reassuring the good idea to attend a school with just girls.

Senior Anne Marie Yatsula went on a date sophomore year with a boy known for rapping, and according to Yatsula the whole experience was nothing but awkward. Yatsula and her date, Michael, never exchanged numbers prior to meeting and he asked her through Snapchat.

“I went on a date with a kid named Michael and he rapped the entire drive to the Lightning game as well as the entire way home. He also didn’t talk to me the entire game.”

But Yatsula decided to give Michael a second chance when Michael asked her to his prom.

“He rapped his originals, just like the first time, and it was just as awkward.”

Nicole Browne admits that on one of her dates she got a nose bleed.

“He was really chill about it and tried helping me.”

Unfortunately the two did not go for a second date.

Sophomore, Meredith Hemmings’ first date did not goes as planned.

“We went to the movies just to find out that they were closed.”

Seymour shares that she assumed that the date would go smoothly due to her outgoing nature and having met Kyle before would eliminate awkwardness. Even with those two things in hand, the universe had something else in store for them.

“A homeless man came up to us while we were eating sushi, asked us for money, told us we would have beautiful kids together, but that he was not trying to steal me because he was gay.”

It was not until Seymour handed the man ten dollars that he left their side. Despite the mishap, the cute couple have been together ever since, celebrating seven months.

Although these dates did not go as expected, hope for the perfect date was not lost. High school is filled with embarrassing rendezvous but thankfully exceptional dates outweigh the rough ones. Whatever happens on a date, good or bad, it’s good to know Academy girls always have their sisters to go to in those moments.