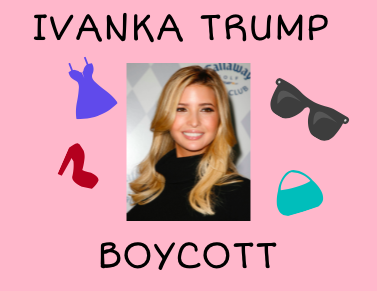 Ivanka Trump launched her brand that promotes strong women in the workforce in 2007.

Ivanka Trump, daughter of presidential candidate, Donald Trump, has been a known advocate for empowering women. Since Ivanka Trump has stood by her father throughout his entire campaign and his inappropriate comments towards women, some people are no longer willing to support her brand. Many people have become offended by Donald Trump’s actions and comments throughout the 2016 election. As a result, a new campaign began with a hashtag #GrabYourWallet that promotes a boycott against Ivanka Trump’s collection.

Updated list. Now includes Marshalls. If you'd rather not see the name "Trump" anymore while you're shopping, call these stores. Tell them. pic.twitter.com/4xXkGcqU4X

Senior Domenica Howard shares, “I don’t agree with it because I think it’s right of her to stand with her father, especially because he is running for president. I don’t think she agrees with what he has said at all, but he still needs to seem united with his family. I mean, you don’t always agree with your dad but you still love him and I think that’s what she’s doing right now.”

Senior Lissa Ogden comments,  “I understand why people would boycott Ivanka’s collection because it is hipocritical of her to promote a brand about something and then not show that same support in her actions throughout the campaign.”

This campaign against Ivanka Trump’s fashion line started after a tape was released of Donald Trump making offensive remarks towards women. Even though Ivanka herself did not make these comments, she has been supporting her father and is guilty by association. Her brand, that made over $100 million in revenue last year, may have been more safe if she had distanced herself from the campaign.

Ivanka Trump has recently responded to the issue in the video below:

Ivanka’s brand has been an advocate for women long before the 2016 campaign. Many people believe that the Trump brand will be in trouble, however there has not been a significant decrease in sales so far.