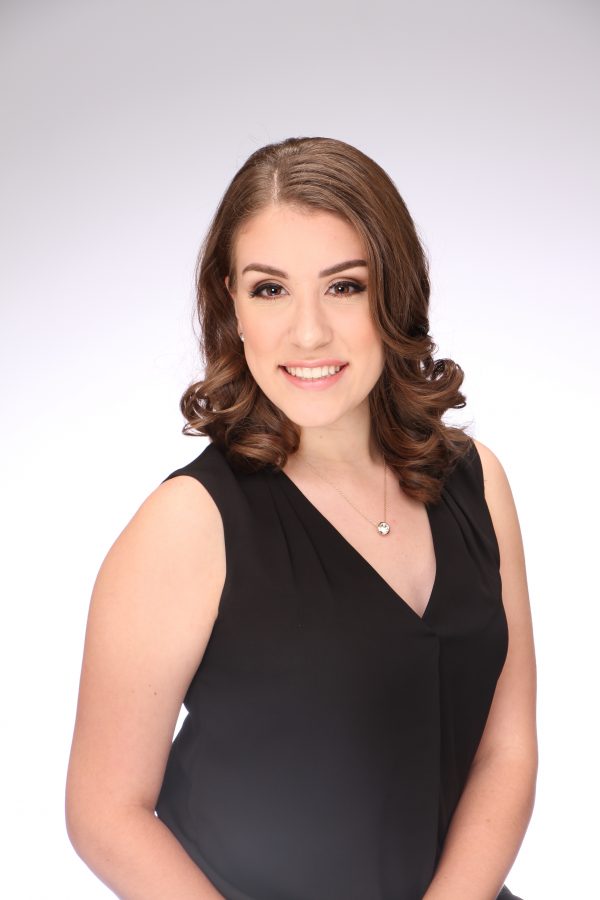 Senior Rachel Tata is very excited for the next chapter in her life where she hopes to pursue a career in theatre. Credit: Rachel Tata (Used with permission)

Among the many applications Senior Rachel Tata has completed this fall, she has applied and been accepted as a finalist for the 2017 High School Honors Performance Series at Carnegie Hall in New York City. She will be singing first soprano with the Honors Women’s Choir directed by the renowned conductor Dr. Tim Seeling. This is a huge honor for Tata, and it is one of the best professional experiences she will have leading up to college.

Achona: What got you interested in singing and theatre?

Rachel: “At my elementary/middle school, ESCS, they would allow us to sing in the choir for mass and we always had music class like every day. So I guess I started singing there but I really didn’t take it seriously until I did the play in 5th grade. And then I started to really enjoy singing more as a talent and a hobby than something like a class I had to do or in mass. Then once I got to the Academy I started to take it even more seriously and consider doing more with it and joining more activities and doing vocal ensemble and the of course doing the plays starting sophomore year.”

A: What kind of experience did you have in your first show?

R: “The first play I did was Charlie Brown, it was the Valentine’s Day one. It wasn’t even voluntary though like our whole 5th grade class had to do it. And they picked names out of a hat and that’s how they casted the show. But it was so fun to do and then we did Annie the next year which was really fun too.”

A: How have your high school experiences affected what you’re planning on doing in the future?

R: “I think with getting more involved in theatre and singing I realized how much I loved it and how much I look forward to doing those activities. I think I just grew to have the maturity to perfect it as an art and also it was part of who I was. So the past few years I just really kind of evaluated what do I want to do with my life and it didn’t come with much difficulty. I knew I really enjoyed doing theatre and singing and dancing. So I was like why not go for it, you know?”

A: How did you prepare for the Carnegie Hall audition?

R: “So I got something in the mail about it at the end of last school year, around like May or June, I think. I got the notification because Mrs. Kimbler nominated me for the program and I didn’t really know what it was. Then I decided to apply and look at it more in depth at the beginning of this year and I applied in early September. You basically had to write your performing bio like your artistic resume. And then send an audio of yourself doing a classical or art song, so like a Latin song. Then a basic application information with questions like why you wanted to do the program and why do you love singing and stuff like that. But it wasn’t that hard, it didn’t really take too long.”

A: Was it nerve-wracking going through the process of auditioning?

R: “I think I was more hesitant and nervous on the audition song, like recording it, because I kept doing it different times and each time if I would mess up I would get frustrated. Especially since I’m not a classically trained singer and I’ve never had a formal vocal lesson, it was hard for me. It’s not something I’m comfortable with so that part was kind of nerve-wracking.”

A: How did it feel right after you applied?

R: “So after I sent it in, like immediately, I wanted a response back. But they email you and they say, oh, we’ll give you a response on Halloween. So you know I was like oh my gosh that’s such a long time to wait because at that time it would have been like around two months to wait for it. And then as a few weeks went by, and it kind of slipped to the back of my mind with everything going on like senior year and applying to college and those applications are crazy, and homework and this and that. And then a few weeks ago, like two weeks ago, I looked at my planner and I saw “application notification” and I was like oh my gosh, that’s coming up. So I started getting excited last week and this week I was really nervous and the whole week I just wanted to to know.”

A: How did you feel when you found out you got in?

R: “I found out Monday, yeah Halloween. At four they sent me an email and we were at (Jaguarettes) practice. I was so excited and just seeing congratulations I was just like oh my gosh this going to be a great opportunity. I was kind of concealing it a little bit because I didn’t want to freak out in the middle of practice but as soon as I got in the car I was really freaking out. I called Cristina Alarcon, because she was like, “Let me know as soon as possible.”  Mrs. Kimbler called me too and it was just really crazy. I called my dad up right away and I was just really excited.”

A: What will you be doing when you are there?

R: “So it’s like a 5-6 day program in New York. I was accepted into the Honors Women’s Choir so I get to sing with them and it’s just the conglomeration of all high school students who got accepted into that choir. They’re sending us materials, songs, song choices, and we have to know them by the time we get there. And then once you get there, you get to study under conductors and professional musicians and for my program, we’re going to be doing chorus rehearsals but we also get to walk around New York which is cool. I think we get to do some sight-seeing like the Statue of Liberty and basic tourist stuff. We also get to see a Broadway show. And then at the end of the week we perform at Carnegie Hall and that’s going to be really cool.”

Tata will spend roughly five days in New York City and will officially be performing on February 5.