Social Media: Then vs. Now 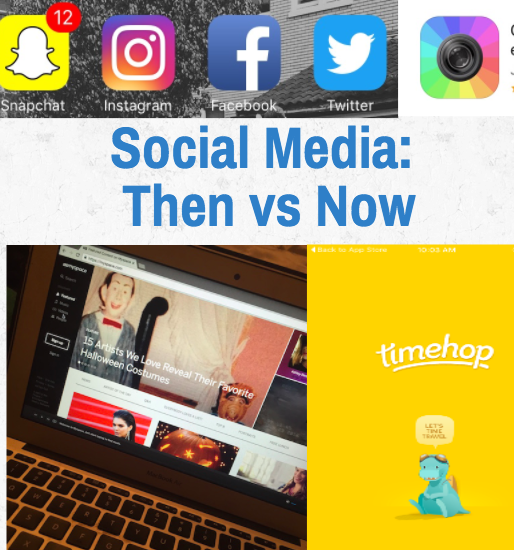 Academy girls go down memory lane with the help of apps such as Timehop to see past social media posts photo credit: Maria Cacciatore/Achona Online

Although social media has drastically changed throughout the years, apps and websites such as Timehop and Facebook memories continuously provide reminders of what social media used to be like. These apps link social media profiles and display personal posts that were made that time last year. It used to be common for someone to post a status or an Instagram caption of lyrics to a breakup song after they got dumped by their fifth grade boyfriend.

Senior Allison Wehle, an active Timehop user, constantly opens the app to reflect on her past. She states that her favorite part about Timehop is seeing Facebook ststuses from her middle school years.

She remarks, “What I wrote makes me cringe so hard that I wish I never existed but I get a good laugh out of it.”

Danielle Gutierrez adds to Wehle’s comment “Just redownloaded it because I missed it.”

Senior, Liz Benjamin has decided to become an active member of MySpace once again. The website, which originally came about in 2003, became one the first networking corporations to spark the frenzy of online sharing. Between friending, chatting, and streaming music, MySpace had it all, and back in the early 2000’s kids begged their parents to give permission to make an account.

Benjamin comments on how she is using MySpace differently this time. “I used to use it religiously and had a bunch of friends on there, but now the only friend I have is MySpace which automatically becomes your friend when you get one.”

Calculus teacher Anne Mikos speaks out about her history with social media. “I did have a MySpace in middle school but I got in trouble for having it and had to delete it. Currently, Insta is my go-to social media.”

Once Facebook came out, MySpace became dormant and the number of Facebook users soared. It was only two years later that Twitter was founded and the trend for social networking became unstoppable. The speed in which media and apps were appearing was faster than some of the students could keep up with. Everyone posted everything; from their favorite songs to what they were watching on television that night. As time passed, value and expectations were placed on profiles, pictures, and captions.

In 2010, the most popular social media site became Instagram. Originally, the site only allowed for the basics-pictures, comments, captions, and likes; however, the app continues to advance. Now, users can post stories, videos, and pictures to their liking. On Instagram, the overall aesthetic of a profile, or “grid,” became a determining factor in coolness. Academy students seem to have a natural ability for funny tweets and artsy photos, but it was not always like that.

Allie Kimpland touches on how different her current Instagram is from her original one. When asked about what has changed about her postings Kimpland replies, “Well I don’t use CamWow filters or make crazy collages anymore…”

Juniors Alexandra Fonseca and Mia Leto add to Kimpland’s comment, sharing “casual selfies are a no and if you are going to post a selfie do not take it off the Instagram camera.”

Morgan Salzsieder could not agree more, but she can not help discussing her embarrassing tweets when first starting with the app. “I got a Twitter for the sole reason of tweeting to One Direction.”

Social Media continues to grow and while Academy girls reflect on the social media journey, many of them find themselves mastering the art of posting on these networks.