Horror Stories From Students in Charge of Academy Events 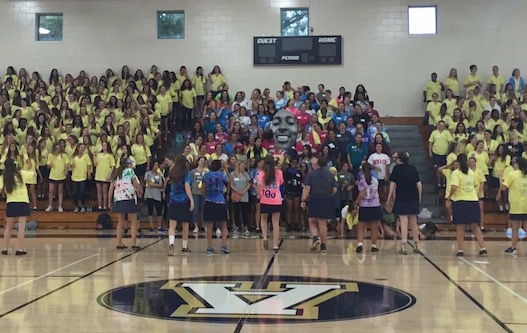 Student life at the Academy is jam packed with dances, fundraisers, spirit events, and more. What many students may not know is that their fellow classmates are the ones in charge of their favorite events. Running an event entails calling businesses to coordinate, designing invitations or t-shirts, handling finances, reaching out to the student body, and more. This is all left for one person or a small committee to manage. Though to the student body the events appear to be flawless, there are many bumps in the road that happen behind the scenes. In the end seeing the participation and support from the student body can make running a major school event rewarding and worth all the stress. Below are some horror stories from Academy Seniors who have planned major events and made it out alive.

“The week of Father Daughter I was a literal ball of stress. I spent the day of father daughter stress eating, and I have never stress eaten in my entire life. We were supposed to have the tables finalized at least a week before the event and the morning of father daughter it was brought to our attention that there were some table settings that were taken to the wrong place. We had to rearrange tables to make sure that the people could still go to father daughter, it was so stressful. Once father daughter ended I really understood what it means to have the weight of the world lifted off your shoulders.”

“I was basically in charge of getting all the themes approved, scheduling, making sure events during the pep rally ran smoothly, and any other stuff that needed to be done. I think the hardest part was making sure that everyone was happy about what themes they got and excited about the pep rally events. The day of the pep rally was the most stressful because we had to make sure that everything happened on time. It was horrible when we didn’t have the event because all the year we spent planning, literally from the year before, was for nothing. I was literally so angry. Nicole even left early because she was so mad. So overall, it didn’t turn out as planned.”

“I had exactly what I wanted in my head for decorations practically since I started planning it. About two weeks before the dance, the venue told me they could not hang up our decorations. I was so confused because it had been something we talked about. I literally thought this was the end of the world. I was eating dinner with my family when I read the email and started hyperventilating. Long story short I ended up finding some guy who said he would do the decorations, but then bailed on me last minute. I called the woman at the venue panicking so badly, and she told me maybe there was a way we could work something out. The next day some other people and I showed up at the venue to hang the decorations ourselves, and they literally gave us a pole and paper clips to hang the decorations up.”

“I was in charge of movie on the lawn and the hardest part of planning it was getting people to buy tickets. The worst thing that could have happened definitely happened to us I think. Ten minutes before the movie was supposed to start our screen collapsed because we blew a surge. The screen was an inflatable and we had it plugged in with about five other cords. Luckily Ralph and some of the Dads Club came to the rescue and helped us tie it against the soccer goal to keep it up. Besides that, the event ran smoothly and was a huge success!”

“After getting home exhausted from two weeks of dance and then student council camp, the all school shirts came in. I was so excited and ripped open the box to find a misprint on the bottom saying “2016-2016.” I was devastated. I cried for so long partly from exhaustion and because school was so close I didn’t think there was anything I could do. For an entire week up to orientation I was literally having these horrible nightmares where I would get up to speak and everyone just was running around and it was chaos. I had never had an actual nightmare about something before it happened, which just made me more scared.”

“The most stressful time during the planning process was when we had to write down everyone’s name who bought a ticket into an excel sheet and much more information; it doesn’t sound bad but everyone was coming in so quickly and I had to type really fast therefore it was so stressful because everything had to be right. The event turned out really nice but it was frustrating to learn that some people did not like the venue, and that hurts to hear because we really worked hard on trying to make everyone happy and make prom really fun”

“The whole process is pretty stressful, but I would have to say beginning the planning it all is the worst. For Jagball, I didn’t know whether or not to choose a theme with Golden Girls or to pick our own, then the t-shirts were very stressful. This year’s Jagball shirt has been through about 15 rounds of proofing because of all the copyright associated with the Harry Potter Theme. I also spoke to about 20 different people at Customink and it was the worst thing in the world. My dad always asks me “Jenna, how do you eat an elephant?” And I have to say “One bite at a time.” It’s silly, but it helps me refocus on what I can do in this moment.”

“The most stressful part of prom for me was the center pieces. We got them the day of the event and we set them up hours before prom, but as we were setting them up some of the pieces were falling apart. We had a lot of trouble setting the different pieces up so the same ones weren’t next to each other, or across from each other. It was difficult and frustrating but in the end we figured it out and it looked beautiful. Prom totally exceeded my expectations. I was very worried but in the end it went very well and everyone seemed to enjoy themselves.”

Running an event at Academy comes with its many stresses, but seeing the end result makes all the hassle worth it to know that Academy girls appreciate the effort and they did a fantastic job. Next time a major event is put on by a dedicated student, be sure to reach out and show gratitude for all their devotion and hard work.