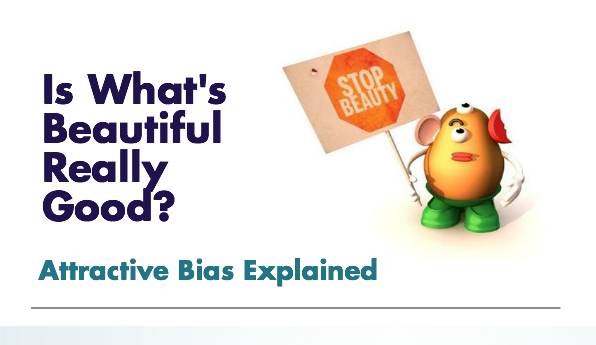 Examples of attractiveness bias are also found on the TV show the Bachelor.

It is a universal belief that a person’s appearance influences the way they are perceived and treated by others. Does this accepted belief have merit in the psychology world? Much to many people’s dismay, it does. It is referred to as the “what is beautiful is good” effect.

According to psychologists, when someone is more attractive, they are perceived as healthier and more approachable. An individual’s perception of beautiful varies, however, the standard of beauty, according to Business Insider, is when women have symmetrical features and big eyes. A person’s appearance is the first trait that a person notices. This means that first impressions are often influenced by one’s looks. One example that proves this theory is the search for college roommates. College students choose roommates based on the only information they have about them, which typically regards a brief biography and several pictures. Thus people lean more towards roommates that are more attractive. Another example is the search for a puppy at the pound. Typically, potential dog buyers search for the more appealing, younger breed as opposed to the alternative.

At the Gasparilla Pirate Invasion, Senior Lara Lontoc experienced attractive bias first hand. As a result of her appearance, she got more beads than others.

Lontac says, “At Gasparilla, this one guy came over, put beads around my neck hugged me and told me I was pretty. I didn’t really know what to make it. A guy in uniform even put some around my neck.”

Although in this instance the only special treatment Lontoc received were plastic beads, the concept often applies to jobs, court hearings, and other aspects of life.

The issue of attractiveness bias is even more prominent in today’s society with the growth of technology and media. Today, people feel more pressured to have a certain appearance due to the pressures society has installed in the world to look a certain way.  Constantly comparing a person’s appearance with their own is detrimental to the self-esteem of that person and everyone else around them.

Senior Addison Diaz says, “I think that people should be more accepting of others and realize that beauty comes in many forms. What you look like is not everything.”

Unfortunately, attractive bias is unfair, but there are ways to combat it. For example, in the work world, an employer may judge appearances at first, however, in the long run, a strong work ethic goes much further than looks.  Another way to fight attractiveness biased is by not being yourself. Find friends who are genuinely good people with strong values and kind hearts, not just pretty people. Though attractive bias is prominent in society, it is import to remember that a person’s appearance is nowhere near as important as what’s on the inside.