HOA: Isabel Laboy Lives According to the “Girl Scout Law” 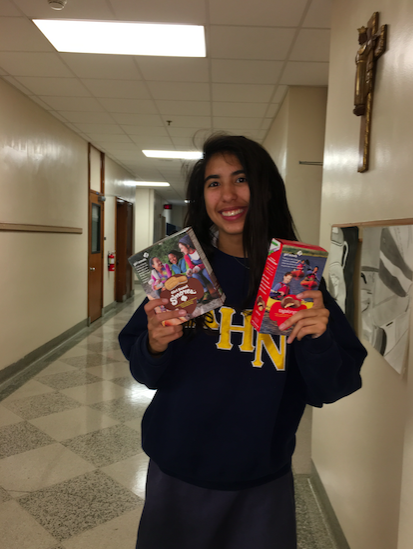 Thin Mints, Samoas, and Tagalongs galore, it is one of the most cherished times of the year for Academy girls, Girl Scout cookie season. Girl Scouts annually sell cookies to raise money and, therefore, fund and power new experiences and leadership opportunities for girls. Constantly on the go, Girl Scout Isabel Laboy ’19 can be found carrying bags and boxes filled with an immense amount of cookies. Motivated by the enthusiasm and joy from the people whom she encounters through her Girl Scout experiences, Laboy has participated in Troop 268 since she was a kindergartener.

Laboy has endured years of training and has recently acquired a Senior position as a Girl Scout. As a senior, she helps younger girls, such as Brownies and Daisies, achieve awards and patches. Laboy also has the role of leading the bridging ceremonies, a ceremony that highlights the transition periods and awards in a girl scout’s career.

Laboy says, “It is also common for parents to ask me to teach their daughters who are girl scouts how to do a sale pitch correctly.”

Each February, Laboy, along with other girl scouts in the Tampa Bay area, flee to the encampment facilities which are specifically designed for the Girl Scouts. This past February, the two-day trip was spent at Camp Dorothy Thomas, the location where the Ruskin mission trip used to lodge.
The senior girl scouts, including Laboy, plan the activities at camp. Along with the coordinated games, there are also survival “tests”. At the campsite, they have to pack a backpack with all of the survival tools required if they were to ever be isolated in the woods.

Laboy reminisces and says, “One of the greatest experiences I have had at a Girl Scout camp was when I was a sixth grader. There was a Boy Scout camp going on across the lake, so we decided to spend the majority of our two weeks at camp competing against the Boy Scouts in various activities.”

Through her years of participating as a girl scout, Laboy admits she has gained independence.

She says, “As a young girl scout, I had to go out into the woods alone for three hours. I had to provide for myself by doing things I had never thought of before; for example, I had to make my own water purifier.”

Laboy has also gained incredible qualities, such as confidence. With selling cookies to both acquaintances and complete strangers, she has learned the skills behind needed for selling to multiple audiences. Laboy has also discovered, through her experiences of selling cookies, that one must forget the judgment that could potentially arise, in an uncommon atmosphere. From the outside looking in, she has realized how this fear could keep girls from achieving their goals.

This year, Laboy has received around $2000 and has sold cookies to 103 people.