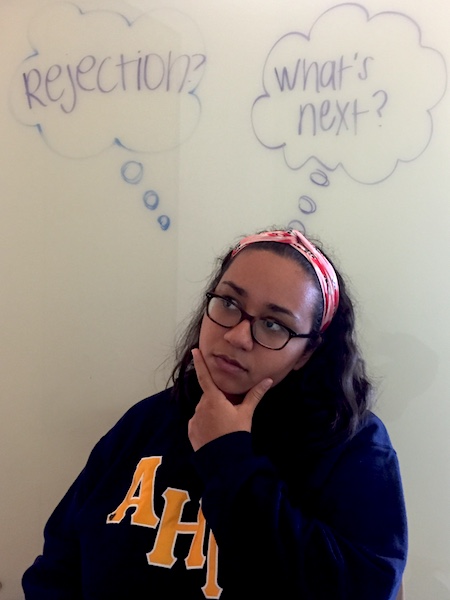 Senior Olivia Stevens believes “things happen for a reason” when it comes to rejection. “Everyone ends up being exactly where they need to be.” Photo Credit: Vanessa Alvarez/AchonaOnline

Rejection is an inevitable aspect of life that young people in this generation struggle confronting. What can be to blame for this? Was it the way we were raised, the “bubble” that we live in, the obsession with social media, or a combination of it all?

For roughly eighteen years, millennials have been raised jaded by the realities of rejection: it’s practically non-existent. If they play a sport, they win a participation award. If they compete in a school-wide competition, another participation award. During this period of adolescence, children are practically taught that they don’t have to work hard to succeed because for eighteen years, there are never losers, only winners.

In an interview, author Simon Sinek says, “They [millenials] were told that they were special all the time. They were told they could have everything they want in life, just because they want it.”

Rejection is  encountered frequently through jobs and relationships. These two aspects make it more difficult for millennials to feel a sense of acceptance in society, leaving them with a lack of self esteem. Sinek makes note to mention that during the lifespan of young people, they grow up always being told they are special and thus, typically get whatever they want from their parents.

Then, all of a sudden, they are placed in the real world and lose self esteem because they “find out they’re not special, their mom’s can’t get them a promotion, you get nothing for coming in last, and, by the way, you just can’t have it because you want it.”

Later on, this leads to many other issues that may surface including depression, stress, and anxiety.

Now, when senior year begins, the big rejections of what one may call “the real world” begin. Students work to apply to their top schools that they have been dreaming of since they first began thinking of college. The big decision day rolls around and many are faced with the devastation of a denial. It is no surprise that many respond to this action in a negative manner, whether it’s getting angry or crying. However, it appears that these feelings linger on for longer than normal because millennials have never properly experienced rejection, therefore, they have no idea how to cope.

Senior Lara Lontoc says, “I definitely feel like we are less accustomed to it than older generations because even when we do fail, sometimes it’s all ‘cuddly.’ They [adults] make it seem like it’s not that bad, so when there actually is a failure, it’s devastating.”

Rejection commonly leaves people asking themselves, “what next?” which leads to stress and anxiety. According to Sinek, since adolescents lack the ability to cope with stress, they resort to extreme coping mechanisms including turning to social media and technology which can also contribute to a decrease in self esteem.

Due to their lack of experience with the concept, when adolescents are pushed into a world of rejection, they do nothing but blame themselves for what’s happening. According to Sinek, this contributes to the rising suicide and accidental death rates for this generation. Observing the negative effects it has on millennials, shouldn’t children be taught the realities of rejection?

Having children face rejection in life does have both negative and positive consequences; the negative mostly concerning their self esteem. The harsh truth behind rejection, however, is that it makes people emotionally and mentally stronger and pushes for effort and participation. Though it is not the easiest of concepts to overcome, it instills the significance in working hard and striving for success.

I used to hate rejection. But now that I understand that what God wants for me will never miss me, I see rejection as redirection.

When it comes to combating rejection, it’s important to stay strong and positive. Sit back and look at the situation as the glass half full as opposed to the glass half empty. This gives the opportunity to realize the good that could come out of rejection. Most importantly, it’s important to realize that rejection is never the end of the world and it shouldn’t be dictating one’s everyday life. Rejection is never a defining moment, it’s simply an opportunity to come out wiser and stronger.