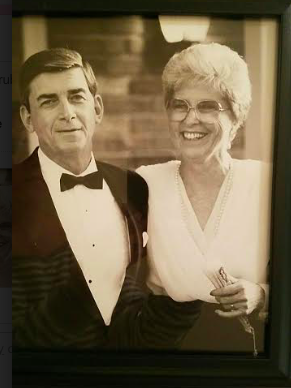 Senior Jenna Wiley said, “My grandma was at a party and her friend left to get something from the store and asked her if she wanted him to bring her back something, jokingly she told him to bring her back a husband. When the friend was at the store, he ran into one of his friends that was in the military and asked him to come back to the party to hang out. He walked in, saw my grandma and he became my grandfather.”

With Valentine’s Day coming up, couples remind each other of how much they mean to one another and reflect on their earliest memories together. If it is meant to be, God will have a strange way of making sure everything falls into place. These students share their parent’s experience of meeting for the first time.

Freshman Ella Castellano said, “My aunt and uncle went to middle school together at Christ the King and they started dating in 6th grade. They were on and off through college and my uncle transfered to the University of Florida to be with her. He later proposed to her in the same room that they met in at Christ the King School.”

Freshman Sara Vivero said, “My parents met at work. My mom knew my dad as the guy running late into the office every morning from his car. She would always see him out of the window and laugh. Eventually she introduced herself and he asked her out. They have been together ever since.”

Junior Mia Lopez said, “My parents met while they working out at the gym. They both caught each others eye and my dad ended up asking my mom out. The funny thing is that he totally forgot he asked her out and completely stood her up on the first date. Somehow my mom managed to forgive him and they ended up getting married.”

Senior Shannon Flaharty said,“My mom cheered for the University of Miami and was on the cover of the University’s magazine. The magazine caught my dad’s eye and he ended up going there on a football scholarship. He got my mom’s schedule because he knew she was a cheerleader after seeing her on the magazine cover. He would wait outside all of her classes with her friends in hope that her friends would introduce him to her. One night they finally met at a party and they got married after college.”

Senior Julianne Nichter said, “My dad was a doctor and my mom was a nutritionist at All Children’s Hospital. My dad secretly had a big crush on my mom for a really long time, but had never had the nerves to talk to her. At the same time my mom secretly had a big crush on my dad but she was really intimidated by him. Eventually he randomly called her and almost chickened out and asked her to go to the James Taylor concert with him. After that date, my mom knew he was the one.”

Senior Jessica Galvis said, “I come from a basketball family and my parents met coaching a basketball team together. They were both participating in a church basketball league and my mom signed up to coach the girls team, but no girls showed up. My dad was coaching the boys team and needed an assistant coach so he offered her the position. They have been together for over 25 years.”

Senior Sarah Ercia said, “My grandparents met in Cuba when Fidel Castro was first coming to power and they both disliked him so they fled to Florida together as teenagers. They have been together since.”

Senior Gabbie Ragano said, “My parents met in between their junior and senior years of high school at a Boston experience camp at Boston College. My dad saw my mom and immediately fell for her. After working up the nerves, he asked my mom out and they started dating. At the end of the summer, my dad went back to San Fransico and my mom went back to Jacksonville. They dated long distance for all of senior year and then both went to Boston for college and then D.C. for law school.”