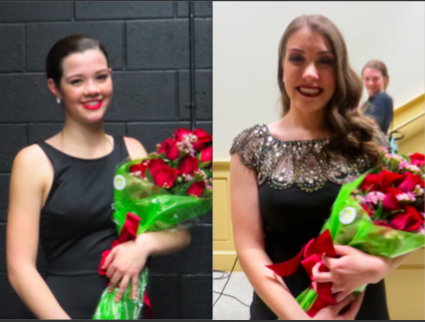 Credit: Valerie White/Achona Online. After graduation from Academy, Obregon wishes to pursue choreography and Tata hope to become a performer on Broadway.

Last Thursday, March 23, Academy’s Fine Arts Department presented a showcase featuring dancer Maddie Obregon (A’18) and singer Rachel Tata (A’17). The idea behind “An Evening of Song and Dance with Maddie Obregon and Rachel Tata” was to create a platform for students that hope to pursue a career in the arts after graduating Academy, and to highlight their strong talents.

Achona: How did you get involved?

Rachel Tata: “Last year around April Mrs. Kimbler approached me and proposed that she wanted to feature a singer and dancer in a showcase. She then asked me if I was interested in performing along with Maddie. The performance date worked within my schedule, so I agreed knowing it was a great opportunity.”

Maddie Obregon: “Mrs. Kimbler said she wanted to meet with me back in August. She asked if I would be willing to do this show in March with Rachel and I was beyond excited to accept the offer.”

Achona: How did you decide which songs to perform with?

Rachel Tata: “Mrs. Kimbler wanted me to stick to the classics, mostly from Great American Songbook. Personally, I already listen to the classical genre, so I compiled a list of some of my favorite songs. Earlier this year we collectively decided which songs would work with the performance.”

Achona: How long did it take to prepare for the show?

Rachel Tata: “Mrs. Kimbler, Maddie, and I met in September to gather the final material for the show and start rehearsing. However, since Maddie and I rehearsed on our own time for the majority of the time, we didn’t start rehearsing all together until January.”

Maddie Obregon: “I started choreographing in December, but final rehearsals with Rachel did not start until three weeks before the show.”

Achona: Did you choreograph everything by yourself?

Achona: What was it like having two of your friends (Mahalia Brookes and Alex Smith (A’18)) be featured in the show as well?

Maddie Obregon: “I loved having my friends in the show. Alex and Mahalia are two very good friends of mine and they made me feel more comfortable backstage. Choreographing with them was so fun too; they were very easy to work with.”

Achona: Which song or dance was your favorite?

Rachel Tata: “I had two favorites. The first was “Smoke Gets In Your Eyes” because I felt the live accompaniment (Chris Vonbartheld) helped enhance the song. My second favorite was the finale song, “As If We Never Said Goodbye” from Sunset Boulevard, because it’s a powerful, show-stopping piece that I was able to perform with Maddie, which was a lot of fun.”

Maddie Obregon: “My favorite dance was the finale where I danced while Rachel sang. It’s a really beautiful song. Also, Rachel’s singing is so gorgeous, therefore it was easy to choreograph. It was my favorite because it was something I have never done before and it was an amazing experience.”

Achona: How was your overall experience?

Rachel Tata: “The performance was one of my favorite experiences this year; the opportunity to perform songs I love along with Maddie was a lot of fun.”

Maddie Obregon: “I have to say, it was one of the most stressful things I have ever done. But after it was all done, it was the best experience of my life. After the show, I was overwhelmed with love and it was the best feeling. I wish I could relive it over and over.”

Achona: Do you think it’s important to feature performances like this to promote the arts at Academy?

Rachel Tata: “Yes, it was a great way to showcase the talent we have at Academy and how dedicated the students are to performing. I believe that the arts will grow stronger each year with the showcase.”

Maddie Obregon: “I think it is very important, especially with the new Bailey Center; promoting the talent of Academy is crucial.”

At the showcase, Obregon and Tata had a huge crowd of moral support from their Academy sisters.

Senior Kathryn Byers says, “I thought the performances were really good; the genre of music chosen showcased their talents well. The pianist playing, instead of a recorded track, helped the audience better focus on Rachel’s voice. Also, I really liked all of Maddie’s costume changes.”

Freshman Casey Tevlin says, “The entire show was amazing, there is really no other way to describe it. I love how Maddie and Rachel were able to share their talents with everybody, and I definitely think the school should have more opportunities for students to showcase their talents in a similar way.”

To see showcase highlights, check out the video here. 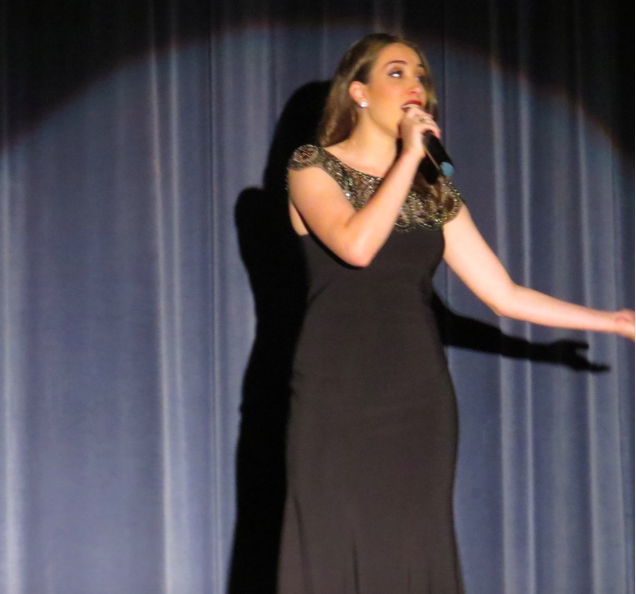